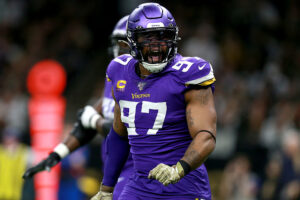 Signing Everson Griffen was one of many signings the Minnesota Vikings made over a busy off-season. They signed several other players, most notably cornerback Patrick Peterson and defensive tackle Dalvin Tomlinson. Peterson and Tomlinson were clearly the higher-profile signings for the Vikings, but Griffen is the single most important addition.

Vikings fans are no strangers to Everson Griffen. They watched him get selected in the fourth round with the 100th pick in the 2010 draft and play gunner on special teams as a rookie. Then, they watched him develop into one of the most ferocious pass-rushers in the NFL. He’s had his ups and downs, both on and off the field. Even with his faults, Griffen’s upbeat, energetic personality won over the Vikings fanbase. However, more important than being well-liked by the fans and the organization, he’s still a very effective player at a position perhaps only second to quarterback in terms of importance.

2021 is a fresh start for the Vikings defensive line, as both Pierce and Hunter are both back.  They also brought back Stephen Weatherly to bolster the defensive line. With the signing of Griffen and adding draft pick Patrick Jones II, the defensive line has made quite the transformation.

The biggest reason the Everson Griffen signing will be the most important singing is that the Vikings mustered just 21 sacks in 2020, good for 27th in the league. That lack of pass-rush was the single biggest reason the Vikings missed the playoffs.  Griffen may not be in his prime anymore, but he managed 6.5 sacks split between the Dallas Cowboys and Detroit Lions in 2020. The familiarity with Mike Zimmer’s defense and a strong surrounding cast will help Griffen be a productive pass-rusher again in 2021.

The Vikings path to a Super Bowl is the route taken by the New York Giants in 2007. The Giants had a rotation at defensive end consisting of Michael Strahan, Justin Tuck, and Osi Umenyiora that accounted for 32 sacks on their way to a Super Bowl win. They also had a quarterback in Eli Manning that played big at the right time that season. Everson Griffen, Danielle Hunter, and D.J. Wonnum could approach that level of pass-rush and Kirk Cousins is certainly capable of stringing together a few good games.

One of Griffen’s most easily spotted personality traits is his energy. He loves to talk on and off the field and on the field also has a motor to match. That level of energy compares to the greatest defensive tackle in Vikings history, John Randle.  Randle’s energy rubbed off on his teammates and the same is true of Everson Griffen.

The other benefit of having Griffen on the team is that the Vikings were short on depth at defensive end. Wonnum is still young and Stephen Weatherly is a veteran journeyman. After Wonnum and Weatherly, the depth falls off fast. Now with Griffen, the Vikings can rotate- mix and match Weatherly, Wonnum, Griffen, and Hunter and have good depth in case of injury.

The Everson Griffen signing will have the greatest impact of all of their signings in 2021. He will have a surgent season providing a psss-rush boost, as well as depth, and provide energy to a defensive line that was awful in 2020. If the Vikings are going to make a playoff run in 2021 they are going to need to do it behind a top five pass-rush. Adding Griffen to pair with an elite pass-rusher in Danielle Hunter greatly improves the Vikings defensive line and chances of playoff success.