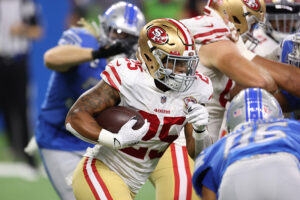 It was an extremely nervy performance from the San Francisco 49ers in their first game of the season, but they came away from the Detroit Lions and Ford Field with a 41-33 victory. Whilst Jimmy Garoppolo or the Niners defense might take the headlines for a lot of the action, it was Elijah Mitchell proving vital for his NFC West team as he took command of a weakened running back corps in Week 1.

The rookie running back had to fill in early from Raheem Mostert who exited the game with a hip injury. However, the former Louisiana back stepped into Mostert’s shoes perfectly. The 23-year-old put up 19 rushes for 104 yards and a touchdown, the Niners only rushing TD of the game.

Great blocking from the likes of Trent Williams and the rest of the offensive line allowed Elijah Mitchell to find the gaps in the Lions defense multiple times, including a long 38-yard rushing touchdown that put the Niners up 14-7 early in the second quarter.

Welcome the the league, @EliMitch15!

For the rest of the game, Mitchell had numerous important runs, including a few good first down conversions. In a game where fellow rookie running back Trey Sermon was ruled a healthy scratch by head coach Kyle Shanahan, Mitchell needed to prove his worth and he certainly did that.

Following a slow preseason, where Mitchell wasn’t involved much, the sixth-round draft pick really showed his capabilities today. For someone who had 3200 rushing yards and 41 touchdowns in college, Mitchell has a scoring reputation to uphold. Only having six rushing attempts over the three preseason games – in which he only featured in the third and final game against the Las Vegas Raiders – meant Mitchell was hungry for chances today.

With Raheem Mostert currently uncertain for next week’s game against the Philadelphia Eagles, Mitchell could see his stock rise within the Niners setup. A solid start to this season could be just what the rookie needs to really get comfortable within Shanahan’s system and make himself useful down the stretch.

Niners Set a Strange Tone for the Season

Up until the fourth quarter, the 49ers looked extremely comfortable. Throughout the first three quarters, Garoppolo was dialing up numbers with wide receiver Deebo Samuel, including a 79-yard touchdown pass midway through the third. However, Samuel, who had 189 yards from nine catches on the day, was almost the catalyst for the Niners defeat.

Something that will frighten 49ers fans will be the state of the fourth quarter. By the two-minute warning, the Niners would find themselves 41-17 up. Despite this, the Lions would peg back San Francisco to 41-33 via a variety of circumstances that left Niners players and fans alike scratching their heads.

After a touchdown and converted two-point play, an onside kick was recovered after bouncing off tight end George Kittle’s facemask. After Detroit made it 41-33, Deebo Samuel looked to have the game closed as he crossed the first down marker. However, Trey Flowers punched the ball from his hands and the fumble was recovered by Ifeatu Melifonwu.

#Lions with the onside kick recovery#SFvsDET |

An injury late on which saw Jason Verrett being carted off is also something 49ers fans will wince over. It’ll especially hurt due to their lack of depth in their secondary – a position the 49ers need to address soon.