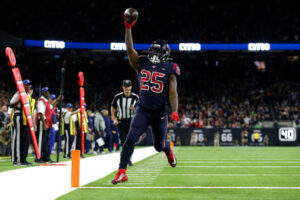 Duke Johnson is signing with the Jacksonville Jaguars. At the present moment, he is headed for the practice squad. However, this move shows the Jaguars need depth at a position they only kept three players for on the 53 man active roster. Johnson has spent time with the Cleveland Browns and Houston Texans since entering the league in 2015.

Former Texans’ running back Duke Johnson is signing today with the Jaguars practice squad, per his agent @DrewJRosenhaus.

Duke Johnson has spent the past six seasons with two teams. He was drafted 77th overall (third round) of the 2015 NFL Draft by the Cleveland Browns. Johnson spent 2015-2018 with the Browns. He then spent the next two seasons, 2019 and 2020, with the Texans.

Johnson’s first four NFL seasons were with the Browns. Over his time with the Browns, Johnson played in 16 games each season, but started just 10 over the course of those 64 games. Johnson had 299 attempts for 1286 yards and five touchdowns over his time with the Browns. That is good for a 4.3 yard per carry average. Over the same time period, Johnson had 235 receptions for 2170 yards and eight touchdowns. He had a catch rate of 77.6% and 9.2 yards per reception in his first four seasons.

Johnson is from Miami, Florida. He played college ball in his hometown at the University of Miami. He had 526 attempts for 3,519 yards and 26 touchdowns along with 69 receptions for 719 yards and four touchdowns in his time with the Hurricanes.

The Jaguars lost rookie Travis Etienne for the season due to a Lisfranc injury. Currently, they have James Robinson, Carlos Hyde, and Dare Ogunbowale on the active roster. Adding a dual threat running back like Johnson could prove effective down the stretch.