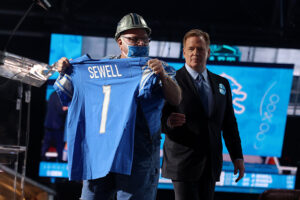 Following an off-season that has already seen a decent amount of turnover on the Detroit Lions roster, most notably including trading away quarterback Matthew Stafford to the Los Angeles Rams in exchange for Jared Goff, the Lions embarked on the 2021 NFL Draft looking to try and rebuild the team once again. By the end of the seven-round draft, Detroit ended up with six players, making a few trades along the way. In the end, the Lions selected the following players:

Instead of going either of those routes, the Lions landed arguably the top offensive lineman available in this draft class with the selection of offensive tackle Penei Sewell out of Oregon. As long as we’ve been analyzing the players entering the draft, Sewell was viewed as the top player available on the offensive line. Detroit chose that route to try and shore up a big need on the offensive side of the ball.

At just 20 years old, the 330-pound lineman will immediately be inserted into the offense as a starter to try and protect Goff and open holes for the Lions running game. Although it might not be the flashiest of picks at 7th overall, Sewell was the best option available for Detroit and will be a staple on the team as it goes through another rebuild.

The Head-Scratcher: Not Taking a Wide Receiver Earlier

One of the biggest needs on the roster this off-season for the Lions is at the wide receiver position. With the departures of multiple players in the receiving group this offseason, Detroit still needs to address that need. They must fill that spot on the depth chart for Goff to be able to target in the passing game.

The biggest concern now with the draft over is that the Lions didn’t really do a whole lot to address that area of need on offense with their six total selections in the draft. Detroit did manage to take a wide receiver in the fourth round. They selected USC wideout Amon-Ra St. Brown with the 112th overall pick. He is a solid pick but the Lions probably should have looked to add a wide receiver earlier in the draft as well.

If Sewell wasn’t on the board at the 7th pick, one could imagine Detroit taking a wide receiver in the opening round. The options included selecting Alabama’s DeVonta Smith. Instead, the Lions went with Sewell and later selected back-to-back defensive lineman before finally grabbing a receiver in the fourth round.

Wide receiver was an area of need and still is for Detroit. That’s the biggest head-scratching moment from the draft for the Lions.

It wasn’t all that surprising to see Detroit target a defensive tackle with one of its earlier selections in the draft. Seeing the team select Levi Onwuzurike out of Washington in the second round (41st overall pick) wasn’t a shock.

Perhaps one of the biggest surprises of the draft or the Lions was the fact that they made it back-to-back defensive tackle selections. They also selected North Carolina State’s Alim McNeill in the third round (72nd overall pick).

McNeill could end up being a solid addition to the defense in Detroit, so that’s not the surprising part about the pick. The reason that it was a surprise is the fact the Lions selected another player on the defensive line just 30 picks prior. Knowing the team’s glaring need to add talent at wide receiver, among other positions, they still choose McNeill.

Maybe Detroit didn’t view any of the receivers on the board worthy of taking in the third round, but you would have liked to see the team get an offensive playmaker rather than going the surprising route of picking McNeill in the third round.

The steal of the draft for the team was with the selection of cornerback Ifeatu Melifonwu out of Syracuse.

After a trade with the Rams, the Lions selected Melifonwu in the third round. They grabbed a talented defensive back with the 101st overall pick. Coming into the draft, many viewed Melifonwu as a player who could go in the top 50 picks in the draft. The fact that he was even available at the 101st pick was surprising.

With that said, it was a steal for Detroit to grab a player such as Melifonwu where it did. The pic helps add to the group on the back end of the Lions defense. The cornerback certainly has things he can work on in his development as a professional in the NFL. His athleticism and other traits already present makes this a solid selection.

Most Likely to Turn Heads During Training Camp: Levi Onwuzurike

One player who could make an impact right away in Detroit and could impress early on in training camp and the early stages of his rookie season is defensive tackle Levi Onwuzurike out of Washington.

The Lions used their second selection in the draft on Onwuzurike. They took the defensive lineman with the 41st overall pick in the second round. That selection helps Detroit beef up the defense. It will be interesting to see how fast Onwuzurike is able to get adjusted to things in the NFL, especially after opting out of the 2020 college football season.

For years, the Lions have lacked a solid interior pass rush on defense. Onwuzurike is a player that could come right in and take on that role. There were likely other players still on the board that could have made for more attractive or interesting picks. Detroit is hoping it found a solid prospect in the second round in Onwuzurike.

To round out the draft, Detroit took linebacker Derrick Barnes out of Purdue in the fourth round (113th overall pick).

After trading up once again, the Lions had their eyes on Barnes in the fourth round. The defense could use his athleticism and presence in the heart of that unit.

Detroit could have stood pat and held onto a few extra picks in the draft to select additional prospects. However, the pick of Barnes is one that could pay off in a big way. He is valuable due to his versatility and all-around game.

Overall, the Lions were able to address some major needs throughout the depth chart during the 2021 Draft. They accomplished this even though they used just six total picks. For a rebuilding team, there is still more work to be done in Detroit. The Lions will likely look to continue to add to the team before the new year begins.