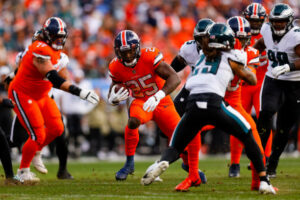 The Denver Broncos were beginning to entertain ideas of a post-season run. Most had expected them to have an easy game against the Philadelphia Eagles and their weak offense, but the latter was just better in every way. Now the Denver Broncos must rethink their gameplan over the bye week or risk failure once again.

Denver Broncos Must Rethink Their Gameplan To Avoid Failure

Melvin Gordon Should Not Be a Starter

Gordon fumbled on 4th-and-1 when the Broncos were down 20-13 in the second half. There is no excuse. The fumble resulted in Eagles cornerback Darius Slay scooping up the ball and making an easy run to the end zone for an 82-yard touchdown return, while Denver tripped all over themselves attempting to tackle him. Prior to that hiccup, the Broncos had converted 77 percent of their fourth-down attempts. That play concluded the third quarter and the Eagles lead was widened to 27-13.

Heading into this game, Gordon had rushed for 477 yards and four scores, averaging 4.4 yards per rush. Now in his second year in Denver, he has made some big contributions with runs resulting in several first downs. Against the Eagles, however, he registered nine carries for 45 yards, plus Denver’s only touchdown. In Week 8, Gordon fumbled during Denver’s final drive against Washington Football Team, which nearly cost them the game. This Week 10 fumble broke the momentum for Broncos offense and was the point that sent Denver towards a loss.

It is time for Javonte Williams to take over as featured running back. He has demonstrated dominance weekly, so this seems the natural path that Denver should take.

Javonte Williams is analytically one of the best running backs in the NFL this year.

The numbers aren’t gaudy yet but this kid is special. Future top-5 back.

When right guard Graham Glasgow suffered a fractured ankle against the Dallas Cowboys, Meinerz was thrown in and immediately shone. He assisted Williams on multiple big runs with his stellar run-blocking. He uses leverage against defenders bigger and stronger than him. His hand strength is exceptional, and he can actively engage linebackers and defensive backs. He bowled over Eagles defensive tackle Fletcher Cox, which enabled Gordon to make that one score.

Together with Lloyd Cushenberry at center and Dalton Risner at left guard, Denver may see a successful run game. It’s safe to say that with Glasgow out for the rest of the season, Meinerz will be the new reigning right guard – and rightfully so.

Shula stepped in as offensive coordinator when Shurmur tested positive for COVID-19. With prior experience in that position, and major success with the 2015 Carolina Panthers offense, it made sense to turn to him. He did the right thing utilizing Denver’s hot running game in the form of Williams and Gordon after a rough first quarter. He knew they could run in closed spaces to open up Teddy Bridgewater’s passing game.

When defense couldn’t contain Jalen Hurts, Shula had to switch to a passing attack, but that just meant Bridgewater was repeatedly driven into the ground. Shula did a laudable job under challenging circumstances, and there is every reason to believe he can do some big things with the offense when given a chance.

Well after the halfway point of the season, time is running out to become a strong playoff contender. The Broncos must rethink their gameplan, regroup and come back strong after the bye or risk falling right back into a rut.

The post Denver Broncos Must Rethink Their Gameplan To Avoid Failure appeared first on Last Word on Pro Football.