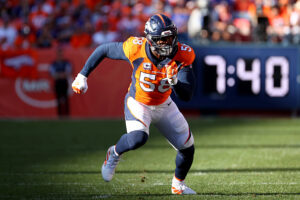 The Denver Broncos have reportedly agreed to trade pass-rusher Von Miller to the Los Angeles Rams. Compensation for Miller is for a second and third-round pick in the 2022 NFL draft. Miller is an eight-time Pro Bowl player with one year left on his six-year, $114 million contract. Denver has also agreed to pay $9 million of Miller’s remaining $9.7 million salary.

If you did not know already, Los Angeles has zero issues parting with draft picks for proven commodities. They have shown that once again with their acquisition of Miller. A defensive featuring him, and Aaron Donald, is going to be a daunting task for opponents throughout the remainder of the season. For Denver, rumors were circling last year about the team potentially looking to move on from him. Unsurprisingly, it appears as if Denver is throwing in the towel on the remainder of the season.

Miller was drafted with the second overall pick in the first round of the 2011 NFL Draft by the Broncos. He would go on to have a Hall of Fame-worthy career accentuated by a Super Bowl MVP, eight Pro Bowl appearances, and three First-Team All-Pro selections. Miller has also accumulated 110.5 sacks, 142 tackles for loss, and 26 forced fumbles during his 10 years in Denver.

Trades typically involve two franchises going in opposite directions. This is certainly the case here. Los Angeles has Super Bowl aspirations and looks playoff-bound at the moment. Meanwhile, Denver is in need of a complete top-to-bottom rebuild but has yet to fully commit. With the uncertainty of their ownership situation continuing to loom, it is unclear what the future holds for this team. One thing is for certain, Denver just might be in the basement of the AFC West for years to come.