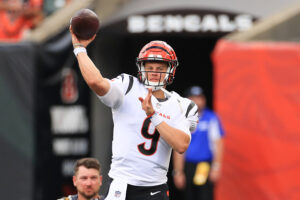 Cincinnati Bengals quarterback Joe Burrow is healthy and ready for Week 1. Burrow went through an arduous rehab process that is culminating this weekend as the NFL season begins. In 2020, Burrow had a fantastic rookie season with 2,688 passing yards, 16 total touchdowns, and a quarterback rating of 89.8 in only 10 games. Zac Taylor is in a critical third year and Burrow has rallied to his defense since arriving in Cincinnati. Taylor and Burrow are intertwined and they look to turn the tide of their recent fortunes to start winning on a consistent basis. The team hopes it starts right away this week versus the Minnesota Vikings. The Bengals are a three-point underdog according to Tropicana Casino.

Burrow has had his share of ups and downs in this training camp. He started off very slowly as the mental processing of his injury was still taking time to develop. As time went on, he gained confidence on a weekly basis as the Bengals staff put more on his plate and more objects around his legs. This latter aspect was the most important as it often is with quarterbacks returning from significant knee injuries. They need to trust that the knee will respond and be safe even after they’ve been fully cleared. Burrow noted one day in practice it just clicked. “The one day where we started changing that, doing it differently, it felt back to normal very quickly, we went out there early one day, started throwing bags at my legs. I’m sure everyone saw it, and I was back to normal after that.”

Supporting Cast Has to Step Up

Burrow’s supporting cast of Joe Mixon, Tee Higgins, Tyler Boyd, and Ja’Marr Chase has to step up. This also extends to the much-maligned offensive line. These units have to play cohesively early on to carry and protect Burrow. The offense has performed well in practice since Burrow noted he’s good to go. The new wide zone-blocking scheme from offensive line coach Frank Pollack should also help. This scheme can cause both wide running and passing lanes for Mixon and Burrow, respectively. Since the Bengals’ scheme is heavily predicated on 11 personnel and play action, this could give Burrow and the offense opportunities to put up points.

Being ready for the season extends to more than just play on the field. It also extends to leadership in the locker room. The Bengals recently named their captains for the 2021 season and Burrow leads the way. He is joined by fellow offensive mates Mixon and Boyd. This reflects a leadership shift that Taylor noted as the backbone of the franchise. As the 2021 season comes into focus, Burrow has worked hard to be ready to perform at the highest level required when playing quarterback in the NFL. He is confident in his knee and his mental ability to process everything defenses will throw his way. The Bengals are banking on a revamped offensive line and new playmakers to aid Burrow along the way. He’s ready to lead and take the Bengals to new heights in 2021 and beyond.