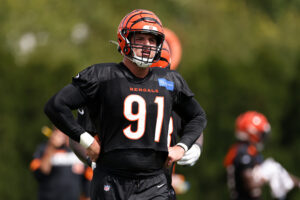 The Cincinnati Bengals defensive line was instrumental in the team’s Week 1 victory over the Minnesota Vikings. It’s safe to say this was a surprise coming off a 2020 season where the entire unit was a massive liability. Wrecked by injury, particularly on the interior, the unit collected only 12.5 sacks last season. Their rushing defense was similarly bad, giving up the fourth-most yards in the league. On top of that, longtime defensive end Carlos Dunlap was traded to the Seattle Seahawks midseason, and sack leader Carl Lawson signed with the New York Jets when free agency opened. The team responded by making a lot of moves to address this issue. They signed Trey Hendrickson and Larry Ogunjobi in free agency. The draft saw the Bengals spend four picks on the defensive line when the team selected Joseph Ossai, Cameron Sample, Tyler Shelvin, and Wyatt Teller. On Sunday several of those investments paid dividends as the Bengals defensive line was a huge part of a Week 1 win.

The revamped line came to play Sunday. Newcomers Ogunjobi, and B.J. Hill combined for three sacks and wreaked havoc on the interior all day. Trey Hendrickson did not show up on the stat sheet but schooled Vikings left tackle Rashod Hill on numerous plays. He would have had a sack or two if not for the multiple holds by Hill. Josh Tupou, who opted out of last season due to COVID-19, also recorded a quarterback hit. All told the line recorded eight hits on Kirk Cousins and kept him under pressure most of the day. This constant pressure also resulted in the Vikings line being flagged for five holds. Like Hendrickson, Sample didn’t record any tackles or pressures but played a healthy 35% of the team’s defensive snaps.

Vikings running back Dalvin Cook is one of the best running backs in the league right now. The Bengals were able to hold him to only 61 rushing yards on 20 attempts. This works out to only 3.1 yards per attempt, which is far less than the 5.1 per carry the team gave up on the season last year. To put on that kind of performance against a top back like Cook shows a massive leap forward. Having D.J. Reader healthy to anchor the interior of the line was a huge boon, as the big man was constantly clogging up lanes. Ogunjobi, who was already a force against the pass, was stout against the run as well.

Excitement for the Season Ahead

Week 1 provided a lot of optimism about the defensive line for the rest of the season. Better yet, the next two weeks bring great matchups for the unit, as both the Chicago Bears and Pittsburgh Steelers have offensive lines that rank near the bottom in the league. But both teams were able to move the ball against tough defenses in Week 1 despite their line play, so it will be a big test of how improved the Bengals defensive line is as they attempt to slow the run game and apply pressure to both teams.