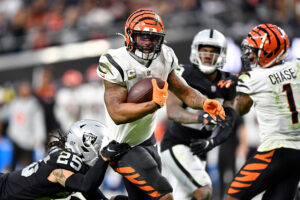 The Cincinnati Bengals got back to their winning ways and snapped a two-game losing streak against the Las Vegas Raiders Sunday at Allegiant Stadium. Coming off a bye, the Bengals had the opportunity to fine-tune their offense. The game plan for the Raiders was to be patient with the running game by a heavy dose of Joe Mixon. This formula worked exactly how the team predicted. Joe Burrow and the rest of the offense did struggle at times, especially in the first half. Burrow was steadfast though in taking what the defense gave him and staying on task by not forcing throws that lead to interceptions. This was a big win and ended up pushing the Bengals to the fifth seed in the tightly contested AFC.

Burrow may get all the fame and attention but Mixon is the straw that stirs the drink for the Bengals. In a long 17 game season, you need to be able to run the ball effectively as the weather worsens and players get tired. Fresh off a four-year, $48 million deal, Mixon is proving to be worth every penny this year for Cincinnati. Mixon currently sits at 759 rushing yards, 194 receiving yards, and 11 total touchdowns. What you really notice when you watch Mixon is the balance of his feet coupled with the ability to cut violently then finish the run with vengeance.

With each passing week, Mixon and this offensive line seem to be gaining more and more confidence. The Bengals will rely on both for the remainder of the season.

When your quarterback or skill players are having bad days, you need a player to step up and be someone you can lean on like Mixon. The Bengals and Mixon have punished teams in the second half of games in each of their six wins. This is the style of football they truly want to be about. Mixon noted after the game, “Sometimes it can get frustrating. A player like me, I always expect to do whatever I can to put the team in the best position, my style of ball, I try to be the guy that sets the tone, and it was getting physical. Coach stuck with the run, and it was little things I had to do with footwork, my eyes, and once we got that stuff figured out, the guys playing linebacker were trying to shoot into their gaps and I was telling them, the center or guard can climb up to the linebacker and we’ll make them pay for over shooting. We came back in the fourth quarter, set our foot in the ground, and made them pay.”

Fight to the Finish

The Bengals are in the thick of the AFC playoff hunt with seven games left. They have everything right in front of them and five of the last seven games are at Paul Brown Stadium. It’s going to take playing hard-nosed and disciplined football to close out the season. Rest assured, Burow, Mixon, and this coaching staff is ready. It all begins this week with the Pittsburgh Steelers. Better tighten those chinstraps.