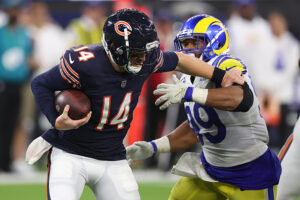 All preseason Chicago Bears fans were told the team wanted and it owed it to Andy Dalton to see what he could do with the starters. When the offense struggled with him at the helm while at least having an air of unpredictability with Justin Fields running the show with backups during the preaseason? “We really want to see Andy with the starters”.

Well, in the opener on Sunday Night Football against the Los Angeles Rams, they (namely, Matt Nagy) got the look we were apparently all waiting for in their 34-14 loss.

Again, it isn’t just this one game. This is what we saw in spurts during the preseason but we were told that it didn’t mean anything. Teams really don’t gameplan then so, no, we weren’t seeing the offense in full. To that end, Dalton finished the night having completed 27 of 38 passes for 206 yards, no touchdowns, and an interception.  But this is also who he is as a quarterback.

For what it’s worth, Dalton navigated through a makeshift tackle situation well enough between the 20s. The Bears managed to drive into the red zone and ultimately a goal-to-go situation on their very first drive.

Unfortunately, a false start and near delay of game penalty ultimately led to an interception in the end zone on a poorly thrown pass.

Fields was limited to a few plays but each of them was exciting, perhaps more than they should have been because of anticipation. They seemed to particularly feature him in the red zone, giving them that unpredictability. The problem is that he threw just two passes, both completions, for 10 yards.

Instead, the Bears used him on option plays leading to his first career touchdown on the team’s fifth possession.

First NFL TD for the rook.

It wasn’t much. But, coupled with Dalton’s mediocrity will be just enough to keep fans chomping at the bit to see the future of the franchise sooner rather than later. It’ll be interesting to see how much longer the coaches can take the wait-and-see approach.

David Montgomery lived up to his billing of being faster from this summer. Fans didn’t get to see it in the preseason as the third-year back checked out after just one carry. The only player to have 1000 yards rushing and 400 yards receiving last season, Montgomery (16 carries, 108 yards, and a touchdown) has gotten more of a workhorse role the last two seasons.

He was spelled by Damien Williams who had 12 yards on six carries.

That doesn’t seem like much but both backs did well to churn out yards against a tough Rams front that finished third against the run last season. It really bodes well for the entire offense all of the things that went into play for the ground attack to be successful remain constant.

First, the Bears (again, Nagy) will need to remain committed to the run. There is an argument he rotated Williams in for Montgomery a little too often early on but that could just be picking nits.

Aside from that, and that is the biggest one, the line has to keep generating push up the middle.

Don’t be fooled by the way the game wound down, with Dalton getting sacked by Aaron Donald. The guys in the middle were able to create lanes all night. The same can be said for the tackles, though pass protection was more of an issue there. It stands to be a little tougher next week. Both Jason Peters and Larry Borom went down with leg injuries.

It’s a shame they failed to capitalize on Montgomery’s early exploits in this one. It would have made things much easier as the game went on. It might have even changed the final opinions on the front five.

We can talk about the secondary getting torched at various points throughout this game. Or we can talk about the (very expensive) pass rush letting Matthew Stafford set the record for highest passer rating (156.1) in a debut with a new team. Both are serious issues that need to be fixed but can’t because of the roster.

But the limitations of this offense with Dalton under center are totally under their control.

This offense, with this offensive line, needs a playmaker to stay competitive. Despite Dalton scrambling for 13 yards and doing fine when the pocket held up, he isn’t that guy. Perhaps more in the interest of the coaches, he severely limits the “voluminous” playbook. It is supposed to feature plenty of read option and, well, Fields just runs it differently.

The problem is that there are likely enough takeaways from this one to stay the course until they “see more”. Despite what most of us saw.

We could (and probably should) see Fields at some point this season beyond the package of plays they gameplan for him each week. Convincing those who can actually make that call, though, isn’t likely to be as easy as hoping they trust their eyes.

The post Chicago Bears: Coaches Got Their Look at Andy Dalton with the Starters appeared first on Last Word on Pro Football.