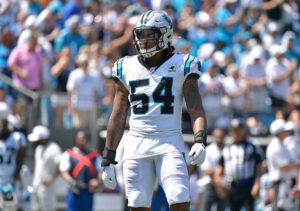 The Panthers came into Week 1 with a plan to pressure the Jets and that proved to be effective from the first series. The pressure seemed to come from all sides as the Jets offensive line crumbled from the snap on every play. Even Jets star lineman Mekhi Becton had trouble protecting Zach Wilson’s blindside. The Panthers racked up six total sacks in their dominant win.

The key to the Panthers success on defense came from the number of players that participated. The Panthers were able to use both their line and linebackers to force favorable matchups. There were multiple times that Carolina’s linebackers were able to apply pressure without being blocked due to there being confusion on the Jets offensive line.

Statistically, Shaq Thompson led the charge for the Panthers. Thompson earned five solo tackles, five assisted tackles, one sack, one tackle for a loss, and one interception. And the game film backs up Thompson’s stats. He spent a lot of time in the Jets backfield when challenging the run. Aside from Thompson’s interception, he also defended three passes.

The New York Jets have the building blocks to have a successful offensive line. However, that was not on display Sunday afternoon. Not only did the Jets offensive line fail to protect their rookie quarterback, but they also failed to create space for the run. The Jets only rushed for a total of 45 yards throughout the entire game. Two key points of failure for the Jets were Mekhi Becton and George Fant.

Jets left tackle Mekhi Becton struggled in the first half of Sunday’s game. Becton had a hard time distinguishing where the rush was coming from. This confusion led to communication breakdowns and a lot of pressure in Wilson’s face. Becton began to improve as the game went on but suffered an injury before he could play to his potential. This injury was a big factor in the Jets comeback falling short.

Right tackle George Fant got the start over Morgan Moses for the Jets. Fant lost most of his one-on-one battles and struggled to communicate pressures that came from the edge. Both Brian Burns and Shaq Thompson saw extreme success when rushing from Fant’s side. After this performance, it won’t be surprising to see Moses get the start in Week 2.

The Panthers will play the New Orleans Saints in Week 2 and will try to continue putting pressure on their opponent’s offense and quarterback. The Saints looked good in a Week 1 win over the Green Bay Packers, but the Panthers defense hopes they can pick up where they left off in Week 1. The Jets, on the other hand, will need to show marked improvement in Week 2, particularly along the offensive line. They will have their work cut out for them as they move on from a disappointing Week 1 loss. Wilson cannot continue to be sacked six times a game and the Jets need to rush for more than 45 yards. New York will need to emphasize success in the trenches if they want to beat the New England Patriots in Week 2.