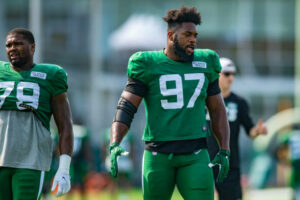 Next, we have an NFL player who is more near and dear to my heart, fellow Ajax, Ontario-born Defensive Tackle Nathan Shepherd. Though his pathway to the NFL was unique, the 6’4, 315 lbs Canadian has managed a successful NFL career to this point. Will the New York Jets‘ third-round draft pick career lead him to a Superbowl victory?

Background of a Canadian Jet

Born in Ajax, Ontario, on October 9th, 1993, Nathan Shepherd attended J. Clarke Richardson Collegiate High School. After graduation, he enrolled at Simon Fraser University where he redshirted one shirted one season, completing 20 tackles, two and a half sacks, and seven tackles for loss with one interception of 18 yards. Unfortunately, due to financial reasons, Shepherd left Simon Fraser and had to take on various jobs to make even. He was recruited by Fort Hays State University and awarded an athletic scholarship to continue his post-secondary aspirations.

Nathan Shepherd, during his career at Fort Hay State Univerity, completed 168 tackles with 27 of them being for a loss of 102 yards. He also completed two forced fumbles, two blocks, and 10 sacks for a loss of 67 yards. As a Sophomore, Shepherd earned All-MIAA Third Team and Mineral Water Bowl Defensive Player of the Game Honors.

During his Junior season, Shepherd received a Don Hansen All-America Honorable Mention Selection s a defensive tackle and an All-MIAA Second Team Selection. In his Senior Year, Shepherd was named by the AFCA and D2Football.com to the All-America First Team. and the All-America Second-Team Honors by the Associated Press. He was named MIAA defensive player of the year and received D2CCA All-Super Region Three First-Team honors. Shepherd was tied for the most votes among Division II finalists for the Cliff Harris Award. He was the first player ever from his university to be invited to the Senior Bowl and declared for the 2018 NFL draft soon after.

Scouting reports defined Shepherd as being very raw and a long-term project whose best years may be after three seasons minimal. While he has the size, physicality, and athletism to be effective, blocking mechanics seem to be a consistent weakness. Everything you want is there, but Shepherd and the coaching staff need to be patient in developing those talents and skills.

To date, Nathan Shepherd has completed 43 tackles with 19 quarterback hits and nine tackles for loss. He was suspended by the NFL for six games in 2019 for using PEDs in order to speed up his recovery from surgery. Shepherd was reinstated in October of the same year.