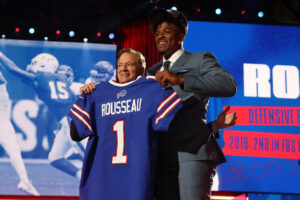 The Buffalo Bills 2021 NFL Draft class is officially here, which means it’s time to review how they did. The coaching staff, front office, and every member of the scouting department came together to pick what they believe to be the best group of prospects for this promising team. When all was said and done, the Bills made eight picks throughout the rounds, obtaining the following players:

Picking at the back end of the first round isn’t easy, as just about all of the sure things are already off the board. With that in mind, teams usually have two choices: swing for the fences or take a safer, yet less exciting, prospect. Buffalo chose to swing for the fences, and that will probably end up being a good decision.

Gregory Rousseau is still a raw player, but his potential is through the roof. He’s an absolute freak of nature with the length, size, and athleticism to turn into a double-digit sack type of player. He’s strong enough to hold his own against the run, although it certainly couldn’t hurt to add a few more pounds. He should be able to play situationally as a rookie and, considering he’s only 21 years old, should get better and better as the years go on.

The Head-Scratcher: No Early Cornerbacks

Just about every mock draft in existence had the Buffalo Bills addressing the cornerback position at some point in the first two days. Tre’Davious White is a phenomenal player, but he cannot do it alone. Defenses spend most of their time in nickel (five defensive backs), so it’s never been more important to carry as many good cornerbacks as possible. The Bills appear to believe they can make up for their lack of cornerback depth with a great pass rush, but it was strange to see the position completely ignored.

In a vacuum, it isn’t surprising that the Buffalo Bills wanted to draft Carlos Basham. While he’s not as physically gifted as Rousseau, the Wake Forest product has a long history of successful play at the college level and the versatility to move to the interior on passing downs. What is surprising, however, is that Buffalo took edge defenders with consecutive picks. Buffalo has a strong roster, but it’s strange to see the team put so much of their available resources into one position. Basham should be a solid rotational player, but it’s hard to justify taking him over somebody like Aaron Robinson.

While many Bills fans wanted Ifeatu Melifonwu with this pick, the Bills found a guy that has the potential to protect Josh Allen’s blindside for the next decade all the way at the end of the third. Spencer Brown is one of the biggest, strongest players in the draft, already capable of bench pressing 500 pounds and still has the potential to add more muscle. He’s surprisingly quick on his feet, never gets beaten by a bull rush, and can move guys around in the run game. Injury concerns are the only reason he was still on the board, but if he can stay healthy, he should be a franchise cornerstone.

Most Likely to Turn Heads During Training Camp: Gregory Rousseau

Buffalo’s first-round pick makes it on the list yet again, as he is definitely the most highlight-worthy player of the bunch. A physical freak, Rousseau’s innate ability to just dominate an opponent will stand out in padded practices. Rousseau’s biggest flaws are about his raw style of play, but those issues don’t usually come up on a practice field. Expect to read a lot of articles about how Buffalo’s first-round pick just won’t stop winning his one-on-one drills.

One offensive lineman just wasn’t enough, as the Buffalo Bills doubled-down on Miami’s Tommy Doyle in the fifth and Texas Tech’s Jack Anderson in the seventh. Doyle is absolutely enormous and won’t get pushed around, although he’ll need to dramatically improve his feet to keep up with speed. Anderson, meanwhile, has a fighting chance at earning a spot as Buffalo’s primary interior backup.

Damar Hamlin is at his best in the box, which isn’t exactly what Buffalo needs. However, this point in the draft is all about taking the best player available, and Hamlin must have been on the top of their board. I am willing to die on the Rachad Wildgoose hill, as I believe he has everything it takes to be a starting-caliber cornerback in the NFL. He is still very rough, but his size and physicality could translate. He was THIS close to being “the steal” of this article and should win out a spot on the roster. Marquez Stevenson is going to have to get by on special teams to earn a roster spot on this crowded depth chart.