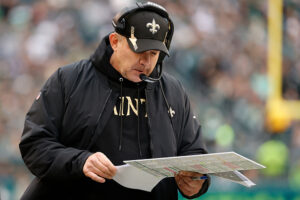 Although this season has been a rollercoaster, it is the time of year to be thankful. Sean Payton has had to deal with a multitude of issues so far in the 2021 NFL Season but has kept the Saints in the playoff hunt through 10 games. He is doing this in a year where the team is trying to replace a Hall of Fame quarterback and while dealing with major injuries. If he takes this team to the playoffs, it might be his best coaching performance yet over a great Saints career. Let’s take a look at Sean Payton’s career and be thankful for what he has given the New Orleans Saints.

Turning a Franchise Around

It is hard to remember the Saints before Sean Payton as head coach. The world moves too fast for reflection most of the time. Newer fans will likely not even remember the Saints team without Sean Payton. Payton started in 2006 and found immediate success with the team. Hope was not something many around the organization had before Payton’s first season. It might be referenced too often, but Hurricane Katrina had devastated the region and the Saints almost left New Orleans entirely. During this first season, Payton and newly signed quarterback Drew Brees gave hope to the maligned Saints fanbase. It cannot be understated what Payton brought to New Orleans by signing with New Orleans after the devastation and franchise history of losing.

Sean Payton’s career brought a winning attitude to New Orleans. Payton won as many playoff games in his first year as the Saints franchise had won in its entire history since 1967. Before Payton, the Saints had only appeared in six playoff games in their entire history. With Payton, the Saints have appeared in 17 playoff games, winning nine of them. Payton has a higher winning percentage than any coach in Saints history. He also owns the record for most games coach with the Saints and most games won. His accolades so far are plenty enough to be thankful for, but he did manage to do something many thought was impossible.

Pigs Have Flown, the Saints Won a Super Bowl

Of course, the highlight of Sean Payton’s career, so far, is the Saints one and only Super Bowl win. The Saints were coming off of an 8-8 season but began 2009 with 13 straight wins. This was enough to secure the top seed going into the playoffs. After the playoff bye week, the team went on beat Kurt Warner and the Arizona Cardinals, Brett Favre and the Minnesota Vikings, and finally Peyton Manning and the Indianapolis Colts. This was one of the most difficult marches through the playoffs in recent history, yet the Saints pulled it off. Without Sean Payton leading the team, the Saints might still be waiting for that elusive championship.

When Drew Brees decided to retire after the 2020 season, some thought Sean Payton would move on to other ventures. No one would have faulted Payton for this since being a head coach in the NFL presents a grueling schedule. Payton is under contract with the Saints through the 2026 season. Of course, he decided to keep going with a new offense. Payton reformed Teddy Bridgewater’s career in recent years and did the same with Jameis Winston in the 2021 season. Winston has unfortunately been lost for the season due to injury, causing even more turmoil for a Saints team that is already missing All-Pro Michael Thomas, several offensive linemen, and countless other players being on and off the injured reserve list. This has not seemed to phase Payton’s spirit as he is still doing everything he can to win in New Orleans.

It will be interesting to see what Sean Payton does with the Saints in the next couple of years. Payton could try and sway one of the superstar quarterbacks next year who could be available like Aaron Rodgers. He could also try to go into the NFL Draft and find the quarterback of the future for the Saints. Several quarterbacks drafted later than the top 10 have worked out for teams in recent years like Mac Jones with the New England Patriots and Patrick Mahomes with the Kansas City Chiefs. There are many unknowns with this team going forward in what looks to be a rebuilding time for the organization. One thing is definitive though; anyone around the New Orleans Saints will support and be thankful for head coach Sean Payton and his accomplishments for this organization.