With the deadline for signings affecting the 2022 compensatory formula having passed, the post-draft free agency wave is forming. The Bears are taking part, agreeing to terms with wide receiver Damiere Byrd, Mike Garafolo of NFL.com tweets. It’s a one-year deal. 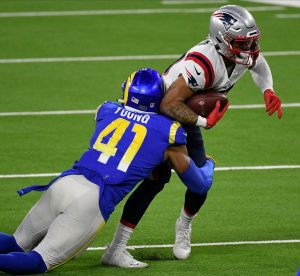 Byrd, who never topped 150 yards in a season prior to his Cardinals stay in 2019, joins Marquise Goodwin as Bears free agency additions at the receiver position. Chicago added Goodwin just before the draft and selected North Carolina’s Dazz Newsome in Round 6 on Saturday.

The Bears franchise-tagged Allen Robinson and have Darnell Mooney in place going into his second season. Anthony Miller‘s status is murkier, with the fourth-year slot receiver coming up in trades at multiple junctures this offseason. The Byrd addition may provide more smoke for a potential Miller trade, but the 28-year-old target also stands to provide the Bears special teams help and give Andy Dalton and Justin Fields an auxiliary weapon.