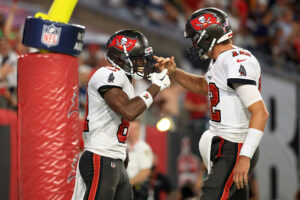 Antonio Brown was a man on a mission for the Tampa Bay Buccaneers in Week 1. The star wide receiver had five receptions for 121 yards and a touchdown in the victory against the Dallas Cowboys. Since arriving mid-season last year, Brown has returned to form as a true number-one wide receiver in the NFL. Last night only solidified this notion as Tom Brady had total confidence throwing Brown’s way early and often. It’s been a long two years for Brown, who has battled various issues on and off the field. Joining the Buccaneers seems to have rejuvenated his career. If the Buccaneers receive this kind of production from Brown weekly, the rest of the NFL is in trouble.

Even when you have an offense as dynamic as the Buccaneers, you still need your players to step up when it counts. Brown has consistently done so since arriving in Tampa Bay en route to a Super Bowl championship. In Week 1, the Cowboys put up 29 points and the Buccaneers needed every bit of production from Brown and other crucial players to earn the victory. Rob Gronkowski, Mike Evans, and Chris Godwin also contributed to the win. Brown, however, stole the spotlight and torched the Cowboys defense, including his signature go route for a 47-yard touchdown late in the second half.

If he stays healthy as the season wears on, both Brown’s performance and production could increase weekly, moving up in the NFL record books.

Winning a Super Bowl never hurts your chances of receiving enshrinement in Canton. Brown took another step toward that as he continued to ascend in rarified air. After last night, he passed Don Maynard and Antonio Gates to move into 29th all-time in receiving yards at 11,867— just behind Michael Irvin.

Brown is no slouch in career touchdowns either. He is currently tied with Steve Smith, Sr. and Art Powell for 28th with 80. With these records falling one by one for Brown, he’s here to remind the rest of the NFL what peak A.B. could do when healthy. He noted after the game, “keep them asleep, nobody likes to be woken up.”

Thursday night set the tone for the Buccaneers and Brown alike heading into the 2021 season.

The Buccaneers have been here before. They are a battle-tested championship club that showed no signs of flinching against a solid Cowboys team. This game sets a precedent they can build off of to defend their Super Bowl title. Brown will continue to play a pivotal role in the offense with Brady seemingly mastering the scheme in year two. The team is now counting on Brown to keep up with this level of play and production all season. Another run at a Lombardi Trophy may depend on it.