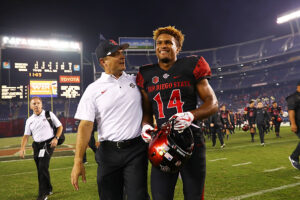 Tariq Thompson is one of the more decorated defensive players that has ever played at San Diego State University. After all, that is what happens when opponents feel as if a player is an extension of the coaching staff. Since high school, Thompson has been a standout player in the San Diego, California area. When committing to SDSU over Mountain West rival Fresno State, being able to stay close to home played a huge role in his decision.

The young free safety had a standout freshman campaign with the Aztecs. Thompson recorded 63 tackles (three for a loss) and five interceptions in 13 starts. He was named to the All-American Freshman Team and second-team All-Mountain West. On his career at SDSU, Thompson recorded 210 tackles (11 tackles for loss) and 11 interceptions as a four-year starter. Plus, he was named second-team All-Mountain West three times in his collegiate career.

There is no question that Tariq Thompson has the instincts and coverage skills to defend the middle of the field for an NFL team. At the same time, with his size and agility, he will have to fight to make a roster. All NFL franchises are looking for secondary players who are athletic and not individuals with good cerebral skills to recognize formations before the snap. Thompson may lack the quickness to defend breakaway wideouts, but he rarely is caught out of position on passing downs.

If Thompson can land in the right situation, he could develop into an outstanding nickel back. Any NFL team would love his versatility to play free safety or slot cornerback. His pass defense instincts are ideal, which allows Thompson to cover a slot receiver deep downfield if necessary.