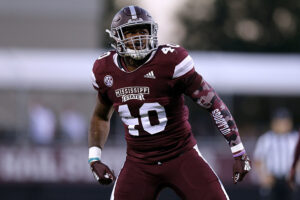 In today’s NFL game, there are a large variety of different types of playmakers on both sides of the ball. Mississippi State Bulldogs’ Erroll Thompson is a player that defines the traditional style of a middle linebacker. He is also a player that can challenge the label of a traditional inside linebacker. Thompson was a traditional-style middle linebacker as a three-star recruit in the 2016 recruiting class. After redshirting in his true freshman season in 2016, Thompson played in 13 games with two starts in 2017. He accounted for 46 total tackles, 21 solo tackles, 5.5 tackles for loss, 2.5 sacks, and one forced fumble. The following season, Thompson accounted for 87 total tackles, 31 solo tackles, 10 tackles for loss (career-high), four sacks (career-high), and two interceptions (career-high). He, therefore, finished his redshirt sophomore season named as a second-team All-SEC selection.

Thompson entered his junior season in 2019 as a veteran starter for the Bulldogs defense. Thompson accounted for 84 total tackles, 38 solo tackles (career-high), 3.5 tackles for loss, two pass deflections (career-high), one fumble recovery, and one forced fumble. That season, Thompson was named a team captain for Mississippi State. In the preseason of the 2020 College Football season, Thompson was a candidate for the Butkus Award. This past season, Thompson accounted for 95 total tackles (career-high), 35 solo tackles, four tackles for loss, three sacks, one interception, and one pass deflection. Thompson has accumulated 312 total tackles, 125 solo tackles, 23 tackles for loss, 10 sacks, three interceptions, and two forced fumbles. He has played in 50 collegiate games for the Bulldogs with 40 starts since 2017.

There are not many traditional-style middle linebackers that gather a lot of attention. This is because most of the offensive philosophies in the NFL are geared more towards fast-paced passing schemes. Occasionally, there will be highly efficient inside linebackers, who are predominantly consistent against the run, that will find themselves capable of becoming a playmaker on an NFL defense.NFL offenses are still running the ball and defenses need to find players to get the ball carrier. Thompson comes into this 2021 NFL Draft as one of the efficient traditional styles inside linebackers. While he lacks speed and agility that will make him a higher selected player, Thompson, however, possesses the physical and mental toughness needed to stop the rush.

Thompson will be highly limited in his first season in the league. He will have to get used to the speed and intensity, as a result, of the new NFL offenses. Thompson has shown since an early stage of his collegiate career that he can adapt. He will also an NFL that will likely utilize him in a 3-4 defensive front for him to be comfortable. He is a hard-hitting linebacker that is highly consistent in getting to the ball carrier and possesses high effort. There will be a team that will see the impact of what damages he can do to an opposing offense in the NFL.