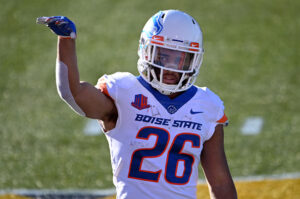 Born in Pasadena, California, Williams attended St. Francis Catholic High School before transferring to JSerra Catholic High School as a senior. Williams led his team at St. Francis to the division playoffs and an Angelus League title with three interceptions, four sacks, and a combined nine touchdowns. Additionally, he started as a junior was named All-Area. Williams rushed for 1,175 yards with 14 touchdowns as a senior and was named Trinity League Co-MVP at JSerra. He then committed to Boise State University.

As a redshirt freshman, Williams completed 36 solo and nine assisted tackles with two interceptions and eight broken-up passes. Additionally, he had 27 punt returns of 303 yards with two touchdowns and 15 kickoff returns for 371 yards. As a redshirted sophomore, Williams had 33 solo and 16 assisted tackles with one forced fumble, two interceptions, and eight passes broke up. he also had 18 punt returns of 126 yards and two kick-off returns of 78 yards with one touchdown.

An incredibly interesting prospect, Williams is extremely versatile and a special teams expert. His success in returns for yardage and touchdowns is unquestionable, as is his first-step quickness. As a defender, Williams has been very good, but not great. Williams is good in coverage. But he has trouble in contested pass situations. He can also be out-maneuvered by smaller, more agile runners. As a defender, Williams’ ceiling is lower and his floor is as a special team fixture and as a kick returner. However, if a team is willing to develop Williams’ offensive instincts further and switch him to an offensive receiver then his potential becomes much higher and he may get taken a round earlier.