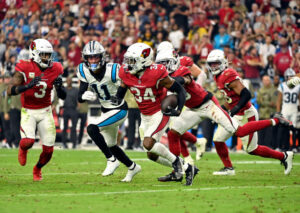 The Arizona Cardinals lost a bad one last week. Now, they have another seemingly tough matchup in the Seattle Seahawks. However, this isn’t the same Seattle side that has dominated for the last decade. The Legion of Boom is long gone, and with Russell Wilson almost out the door this past off-season, the 3-6 Seahawks look to be closing out what has been a successful era in their history. Getting shut out by the Green Bay Packers signaled as much. This week, the Cardinals can do the same if they stop Russell Wilson.

The Seahawks still have some good defensive players, like Bobby Wagner, but the unit is no longer good enough to control and win games for Seattle. Instead, the Seahawks offense and Wilson have to keep pace with the opposition to account for their defensive deficiencies. Against the Cardinals, who will hopefully have Kyler Murray back in the fold, Wilson will have a big task to keep pace, especially when Arizona’s defense is going to be schemed to suffocate him throughout. After ten years, he’s still Seattle’s best player; stop Russell Wilson, beat the Seahawks.

It Starts Up Front

Russell Wilson has been one of the best quarterbacks in the league for a long time. He has a wide-ranging arsenal of abilities that elevate his play and ostensibly cover for some of Seattle’s inadequacies. Namely, Wilson’s uncanny ability to maneuver the pocket, his escapability in tight spaces, has protected Seattle’s offensive line for far too long. Yes, the quarterback protecting his protection. Seattle’s offensive line is bad; they’re so bad, it was reportedly a key factor in Wilson’s desire to leave the team this off-season. In 2021, they’ve had five different linemen give up at least ten pressures, and bookend tackle Duane Brown is posting his lowest PFF grade since his rookie season. Wilson survives on his own ability which unfortunately is exceptional.

There has to be a patient and disciplined approach to rushing Wilson. Arizona can’t afford to let him out of the pocket, where his penchant for extending plays can hurt them; D.K. Metcalf and particularly Tyler Lockett are excellent in working back to Wilson in these situations. The Cardinals might learn a thing or two from what teams have done against them to counteract Kyler Murray’s improvisational skills. Playing contain on the outside is going to be key. Wilson’s protection will fail him. Arizona’s guys up front just have to make sure that he’s still there when they get home.

Now, Wilson is no Murray or Lamar Jackson but, for a long time, he was one of the best scrambling quarterbacks. Along with his lateral ability that extends plays downfield, Wilson is also capable of making vertical plays himself. He doesn’t do it a bunch, but when the Seahawks were struggling against the Packers, Wilson pulled it down and ran the ball himself. Seattle isn’t a top-20 rushing team; poor o-line play and underwhelming personnel at running back make sure of that. Wilson isn’t schemed to be a rushing threat, but when circumstances necessitate, he’s more than capable of contributing.

Wilson isn’t juking anyone out of their socks or torching anyone down the sideline, but he’s a shifty guy in the open field as well as in the pocket. Although Arizona’s scheme is largely predicated on man coverage, Vance Joseph may choose to employ some zone coverages. Firstly, zone coverages will inherently slow down Wilson’s reads; Joseph is excellent at disguising plays, and Wilson had trouble with Arizona’s disguised coverages in 2020. Slowing the ball will help Arizona’s rush to get home against this underperforming o-line. Above all though, zone coverages allow Arizona’s defense to get eyes on Wilson. He’s going to escape the rush, and Arizona has to be able to close quickly when he does. It wouldn’t be a surprise to see Isaiah Simmons or perhaps even Budda Baker play some spy against Wilson either.

For all of Wilson’s antics in the pocket, the most effective, and by far the prettiest weapon in his arsenal is that oh-so-beautiful moonball. It’s one of the most aesthetically pleasing throws in the league and last season, Patrick Peterson spent much of the game enjoying a front-row seat to the spectacle. Wilson’s relationship with Lockett has made Seattle’s downfield game lethal; Metcalf is usually the first read for much of the quicker stuff, but Lockett is Wilson’s guy downfield. He trusts him absolutely and is gonna throw that ball.

Wilson’s relationship with Lockett is equal parts venomous and risky; Wilson’s belief in his guy sometimes creates turnovers, as seen in the Packers game. Fortunately, Arizona’s deep field safety Jalen Thompson is well-equipped to be the backstop of his defense. A player in fine form, Thompson successfully quelled Matthew Stafford’s deep-ball ability and can absolutely do so against Wilson. In fact, given Wilson’s proclivity to toss that moonball, there may even be opportunities for Thompson to come down with the ball himself.

Beating the Seahawks starts with stopping Russell Wilson. Fortunately, after enduring a decade of abuse at his hands, Arizona’s defense is well-constructed to do so. By keeping their eyes on him and playing disciplined football, the Cardinals can stop Russell Wilson.