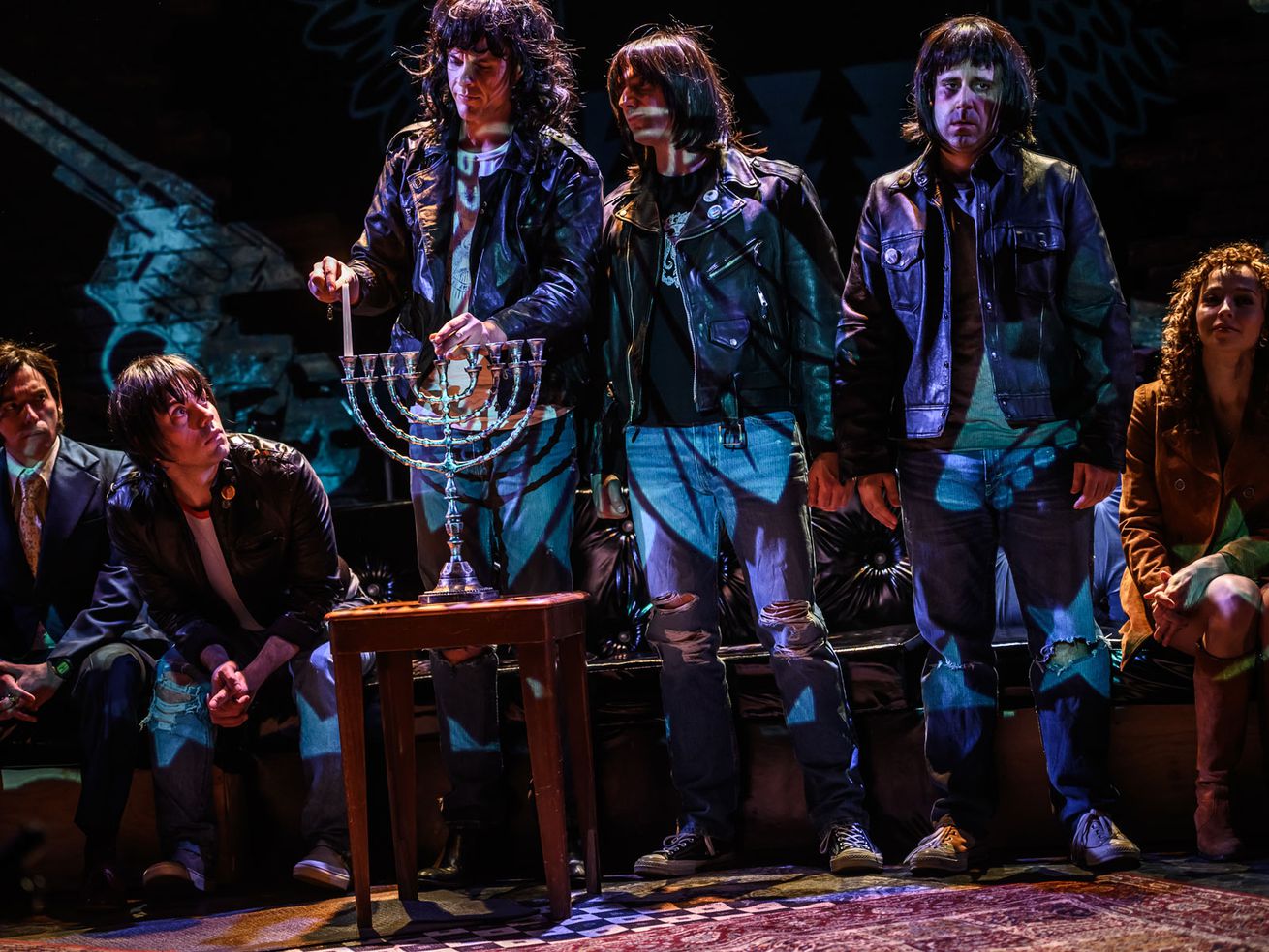 Shunting the band’s actual songs off to the postshow mini-concert feels inescapably odd, especially in a city as teeming with talented actor-musicians as Chicago.

Though it’s about the seminal punk band the Ramones, “Four Chords and a Gun” wants to make one thing very clear. The show is, as its marketing materials put it, “a play followed by a concert. Not a [expletive] musical.”

The unprintable extra emphasis there suggests that the ticket sellers behind this production, a transfer from Toronto stocked with Canadian actors, assume the Ramones-loving fans they’re hoping to attract would be repelled by the idea of a punk-rock musical. The success of Green Day’s “American Idiot” on Broadway notwithstanding, perhaps the producers are right. So I’ll allow the stipulation and offer my own confirmation: It’s not a bleeping musical.

That said, “Four Chords and a Gun” can’t escape some of the traps that tend to ensnare musical biographies of musicians, from “Buddy: The Buddy Holly Story” to “Beautiful — The Carole King Musical” to “The Cher Show.”

Chief among them is a tendency toward signposting — weaving info-dumps into the script as a way of keeping us, the audience, oriented in the story’s timeline, even if it makes for contrived dialogue among characters (“remember, you’ve already burned out one drummer!”). A corollary to this is what I like to call drive-by storytelling: the need to hit so many biographical beats that you wind up pointing at them like a tour guide while the vehicle keeps moving. (“The Cher Show” provided a stark example of this in its Chicago tryout last summer, essentially cramming its subject’s extensive, Oscar-winning acting career into a single second-act musical number.)

“Four Chords” curtails some of these issues by homing in on a particular episode in the Ramones’ career: the recording of their fifth studio album, 1980’s “End of the Century,” with the influential producer Phil Spector. “If there’s a song that got stuck in your head,” Joey Ramone (Justin Goodhand) tells his bandmates, “this guy made it happen.”

First-time playwright John Ross Bowie is best known as an actor — he played Minnie Driver’s husband on the excellent and, sadly, just-cancelled ABC comedy “Speechless” — but he also played in a pop-punk band in his 20s, and says he’s been a Ramones fan since he was 14.

Bowie’s deep fandom and actorly experience both likely influenced the smart decision to focus in on the making of this one record, rather than attempt to capture the band’s entire messy run.

Instead, we meet the band at a moment when it’s treading water. The Ramones have put out four albums in three years and they’ve been touring constantly, but they’re struggling to get radio play and club promoters are still giving them raw deals. They’re critical and cult favorites but still basically broke; both the band and their label are ready to cross over to mainstream success. Spector (Ron Pederson), whose “Wall of Sound” approach had defined hit recordings for the Ronettes, the Righteous Brothers, and Ike and Tina Turner, hasn’t had a hit in seven years and is well on his way to eccentric-recluse status.

A rumor has persisted that Spector pulled a gun on the Ramones at one point in the “End of the Century” sessions. Though members of the band have denied or at least downplayed the incident over the years, imagining the details provides Bowie with his play’s central set piece and title (as well as foreshadowing Spector’s eventual murder conviction in a separate incident three decades later).

But the lack of rock ’n’ roll proves to be a problem. “Four Chords” shuts us out of the studio entirely — and, inadvertently, out of the band’s creative process. Bowie conveys plenty of data about the Ramones and their interpersonal clashes, but we don’t get much sense of how, or why, they make the music that they do. And all we get to hear of it are recorded snippets during scene changes. Pederson’s Spector, in fact, is the only character to pick up one of several onstage guitars in the course of the play.

There’s some fine acting on hand; Goodhand and Santalucia bring complexity and vulnerability to their respective Ramones, and Smythe makes an admirably strong impression as the underwritten Linda.

But shunting the actual songs off to the postshow mini-concert (where they’re performed by a quartet of local musicians, not the cast) feels inescapably odd, especially in a city as teeming with talented actor-musicians as Chicago. Maybe it should have been a bleeping musical after all.