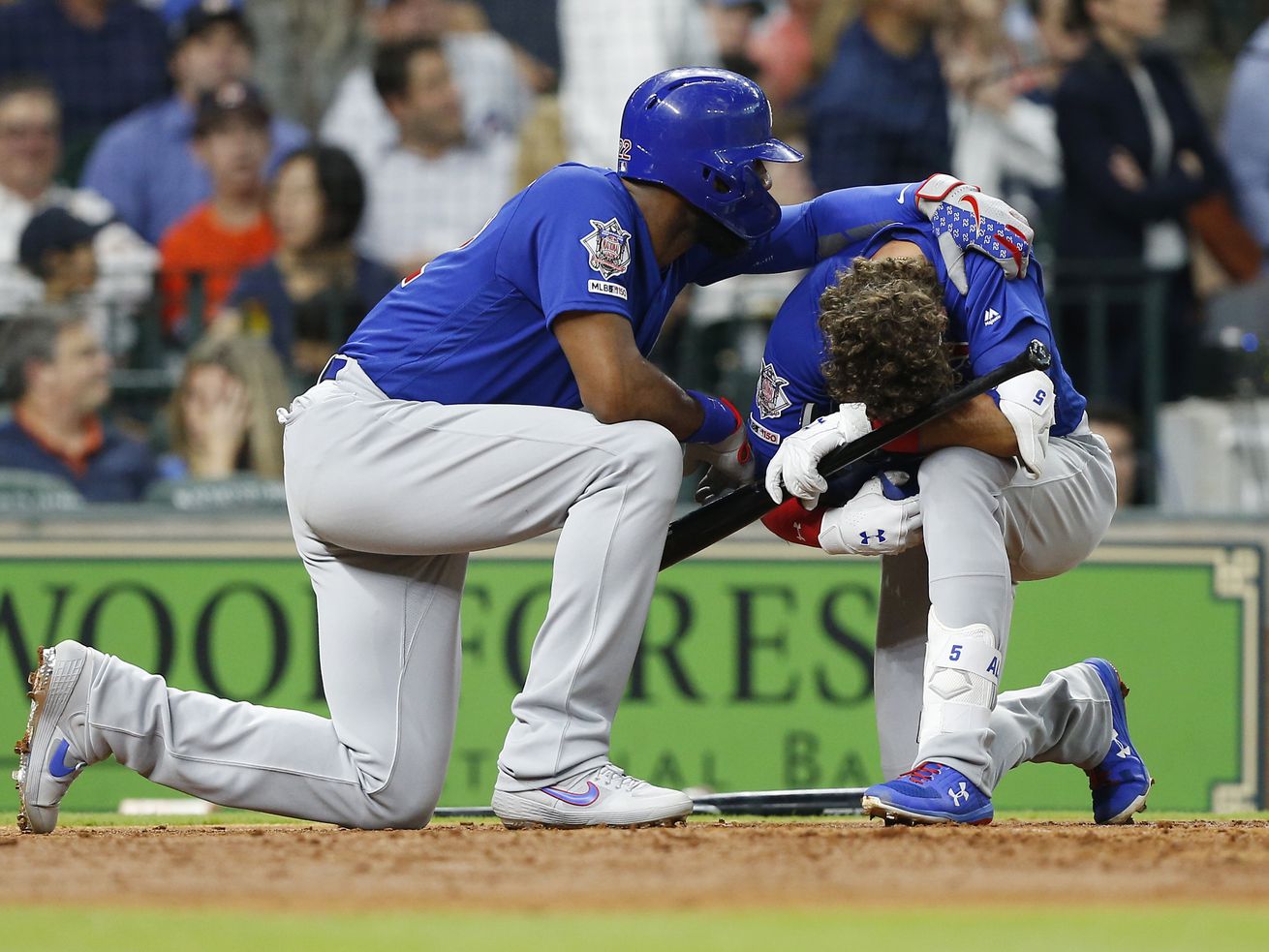 “God willing, I’ll be able to have a relationship with this little girl for the rest of my life,” Albert Almora said. “Just prayers right now. That’s all I really can control.”

HOUSTON – The game stopped in the flash of time it took a hard foul ball to reach the seats beyond third base.

Reaction was immediate in the seating area, where a small girl had been hit, fans waving for help from ballpark staff, seconds later a man rushing up the stairs with the crying child clutched to his chest, seeking medical attention.

Cubs center fielder Albert Almora Jr. watched the flight of his foul ball, took one step toward the scene, then sunk to one knee, distraught, his head in his hand.

“As soon as I hit it, the first person I locked eyes on was her,” said Almora, who was consoled by teammate Jason Heyward, the on-deck batter, who knelt to put an arm around Almora.

“I didn’t see it exactly. I heard it though,” said Heyward. “I know that sound. After that you just try to be there for him.”

Eventually manager Joe Maddon emerged from the dugout, and Almora needed another minute even after rising to his feet, before stepping into the box.

He struck out on the next pitch, calling the moment a “blur.”

The Cubs eventually won 2-1 after losing the first two games against the American League West-leading Astros.

But the fourth-inning incident cast a pall over much of the night and underscored baseball’s continuing battle with fan safety in an era of smart-phone distractions and balls being struck harder than ever before.

The young fan’s condition – some social media reports suggested she was 4 – was not immediately known. The Astros released a statement postgame that said only that she was at a nearby hospital.

But barely a year after major league baseball mandated protective netting be extended in all ballparks past the dugouts, Wednesday night’s terrifying incident and Almora’s emotional response on a national telecast is sure to raise new calls for even more protections for fans.

“Right now, obviously, I want to put a net around the whole stadium,” Almora said softly after the game, his voice starting to crack. “I’m sorry. …”

Almora and teammates were visibly impacted for the next few innings after the incident.

“Albert is an emotional young man, with children, so that made it even more real to him,” Maddon said.

“There’s different things you’re thinking about doing, but I know he’s going to be lost in that at-bat, and Jason was impacted by watching the whole thing, too,” Maddon said. “We all were. It’s a human moment. I’m really actually proud of the way he reacted.”

Maddon offered Almora a chance to come out of the game after the fourth inning, but after taking a few minutes in the clubhouse to compose himself, he told Maddon he wanted to stay in.

“I think it would have been worse for me mentally if I would have gone out of the game,” he said. “Unofficial reports, how she was doing, kept me going.”

Almora got those reports from fans in the seating area after the bottom of the fourth, and from a nearby security guard, who gave him a long hug after he responded with fresh emotions.

Details were scarce, but some social media accounts from the stadium and at least one news report suggested that the update Almora got from the guard was optimistic under the circumstances and that the emotion, including tears, was less breakdown than release.

After the hug, teammates Javy Baez and Heyward approached and walked Almora back to the dugout, Almora hiding his face in his glove.

“I know he didn’t mean to stop right there and hug. That’s Albert, man,” Heyward said. “It’s good he let it out. I’m glad he did. That’s hard to deal with.”

The Cubs didn’t score again in the game after that, and Cubs starter Kyle Hendricks – who was so locked in he said he was in the dugout and missed most of the drama – finished off a big May with a dazzling eight innings to make it stand.

But the victory was far down the list of thoughts in the clubhouse.

“Puts life into perspective,” Almora said quietly. “God willing, I’ll be able to have a relationship with this little girl for the rest of my life. Just prayers right now. That’s all I really can control.”