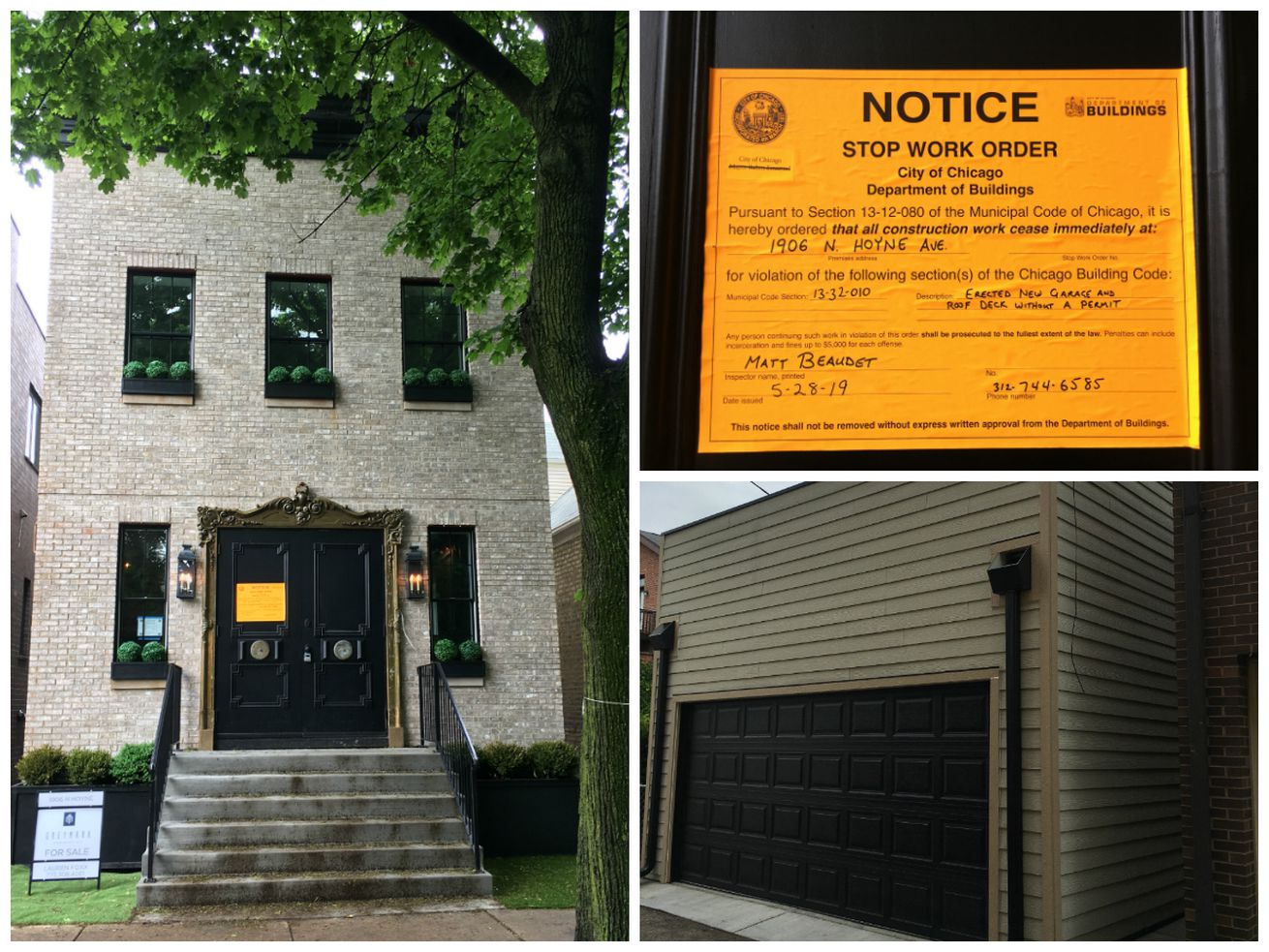 The notice comes just two months after the show’s developer was called to a meeting with city officials over neighbor complaints.

A Bucktown home featured on “Windy City Rehab” on HGTV has been hit with a stop-work order by the Chicago Department of Buildings for doing construction work without a permit.

The order halting construction on the property comes barely two months after “Windy City Rehab” co-star Donovan Eckhardt was summoned to a meeting with city officials after complaints from residents living near some of the reality show’s projects.

The order was issued Tuesday at 1906 N. Hoyne Ave. for a new garage and garage deck built without a permit. On Wednesday, a large, neon-orange sticker remained on the home’s front door barring any more work and warning of penalties including “incarceration and fines up to $5,000 for each offense.”

Buildings department spokesman Gregg Cunningham said in this case, the city has ordered a fine of $1,000 and will assess an additional $500 on top of the normal $500 permit application fee.

In an emailed statement, Cunningham said: “The Department of Buildings takes this issue very seriously. The permitting process ensures that buildings are constructed in compliance with all applicable building and zoning codes. Performing work without a permit or beyond the scope of a permit is a serious offense that could pose a threat to construction workers and public safety. It can also result in fines and costly repairs or remediation work by the owner in order to bring the project into compliance.”

He added that the city will “closely monitor” Eckhardt’s company, Greymark Development Group, and “we will not hesitate to take further enforcement action against the developer if necessary.”

An HGTV spokeswoman provided this statement: “We are aware of a stop work order at N. Hoyne Ave. in Chicago. The appropriate parties are in communication with local building officials and working to resolve any outstanding issues.”

Chicago officials met with Eckhardt on March 22 following two earlier stop-work orders at another Bucktown project and numerous complaints from neighbors about noise, trash and unsecured work sites at the show’s properties.

A deputy commissioner and a supervising inspector from the buildings department had called for the March meeting to discuss permit and inspection issues and neighborhood concerns.

After that meeting, the city said Eckhardt had agreed to address the issues and “be a good neighbor for any current and future construction work.”

The show’s first season featured 11 properties, all on Chicago’s North Side. Viewers followed the ups, downs and drama as designer Alison Victoria —whose full name is Alison Victoria Gramenos — and Eckhardt purchased, rehabbed and flipped properties in hip neighborhoods on the North Side.

But while the show has legions of fans, some neighbors haven’t been as thrilled.

Some nearby residents have complained about trash, noise and messy mishaps including a burst water line that flooded a neighbor’s basement at one project and exterior walls that accidentally caved in at another project.

After the cave-in, at 1803 W. Wabansia Ave. in Bucktown, the developers got hit with two stop-work orders there for doing work outside the scope of permits.

In another case, the city discovered that one unit of a building Eckhardt had rehabbed was already sold and occupied — despite not ever having had its required final inspection. That project was not featured on television.

The Hoyne Avenue home where the latest stop-work order was issued is still for sale for $1.43 million, a $20,000 price drop from earlier listings. On the show’s first season, Victoria turned down a would-be buyer who wanted to change elements of her design.

Among the flourishes Victoria installed at the home: an antique French giltwood doorframe from southern France installed around the front door, along with doorknobs she said cost $2,000 but which were later removed after their value was revealed on the show. The doorknobs have still not been reinstalled.

Neighbor Denise Belland said Wednesday she was surprised crews built the garage and garage deck without a permit.

“Especially in this neighborhood — if you do anything without a permit, you’re screwed,” Belland said.

Belland, a longtime Bucktown resident whose home has been in her husband’s family for 67 years, said the TV show’s construction workers mangled their back fence gate but replaced it after Belland and her husband complained.

“I have no beef against these people, but I hope somebody nice buys it. That’s all I care about,” Belland said.

Numerous efforts to reach Eckhardt or Victoria were unsuccessful Wednesday.

In March, Eckhardt had defended the show in a phone interview with ABC7 Chicago, saying, “We’re trying our absolute best to be the best neighbors we can. I understand it’s frustrating to live next to construction. But at the end of the day I think we’re doing really good work. I’m a neighbor. I live in Bucktown, and I’m proud to drive by every single home we’ve done.”

HGTV has said “Windy City Rehab” is one of its most popular new series, claiming 9.3 million viewers in its first month and a half on the air.

In a promotional video, Victoria said her aim was “bringing sexy back to the city.”

“A hundred years from now, people will be saying my name. I absolutely think I’m changing Chicago one house at a time,” Victoria said in the video.

The show has generated lots of passionate comments online. Fans love the suspense and drama of rehabbing old homes. But critics say the show runs roughshod over historical architecture and contributes to unwanted gentrification.