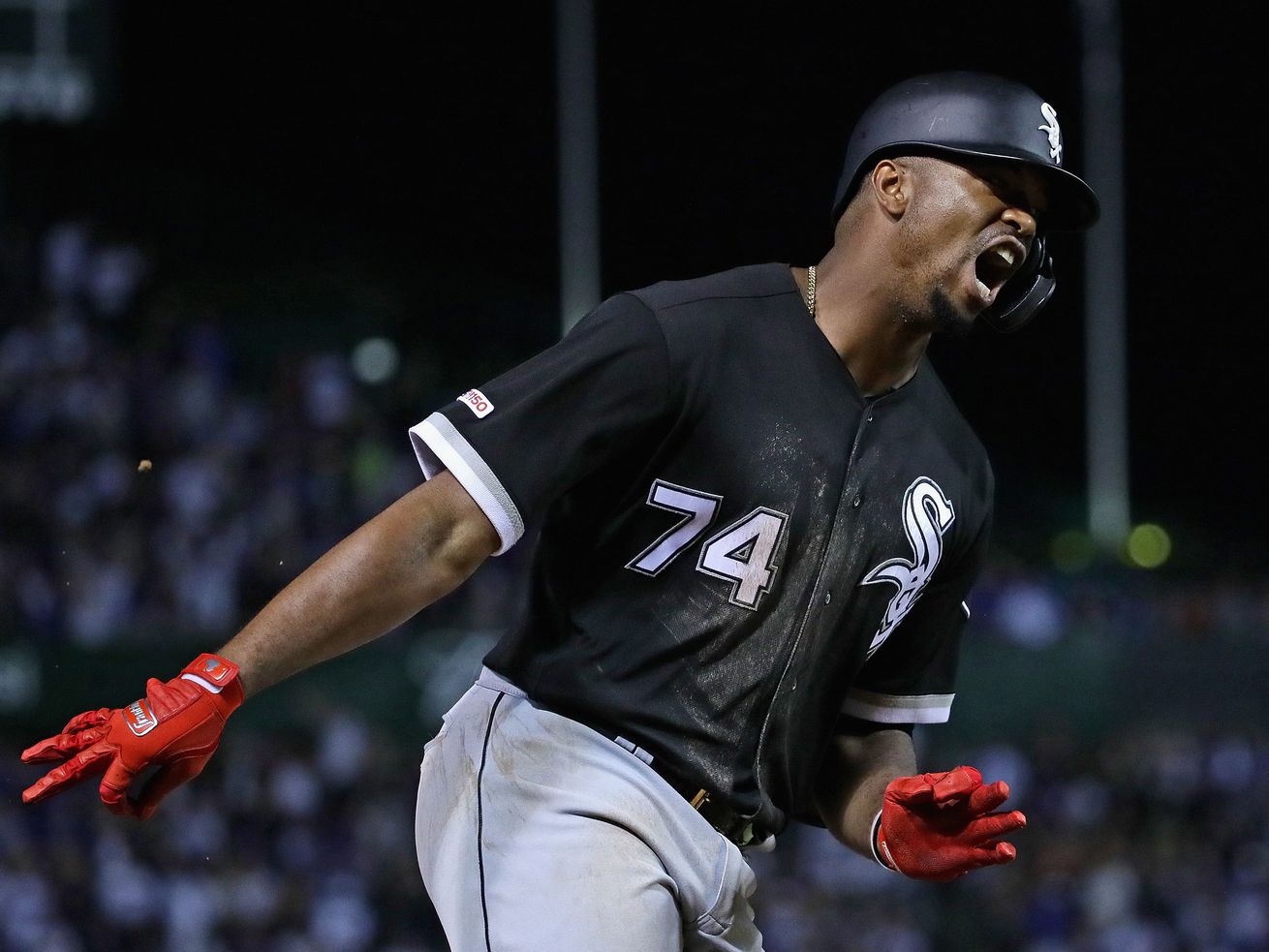 Eloy Jimenez, shown here after a homer against the Cubs, appears close to making his White Sox return. | Photo by Jonathan Daniel/Getty Images

Tuesday, anyone? The opener of the upcoming series against the Mets would be a fine time for Jimenez to rejoin the lineup. If not that night, then a day or two later?

White Sox rookie Eloy Jimenez hit it and held it — the final note of ‘‘The Star-Spangled Banner,’’ that is.

While the actual anthem singer Friday warmed up for her assignment hours before the Sox hosted the Twins at Guaranteed Rate Field, Jimenez poked his head into the dugout just as reporters were beginning to interview manager Rick Renteria.

‘‘Braaaaave!’’ Jimenez sang, a smile as wide as left field on his face.

It was a good day for Jimenez, who seemed to move a significant step forward as he works his way back from a bruised ulnar nerve in his right elbow that has kept him out since July 16. He threw to bases from the outfield. He hit in the cage. He took multiple rounds of batting practice on the field, mixing in some long home runs.

Tuesday, anyone? The opener of the upcoming series against the Mets would be a fine time for Jimenez to rejoin the lineup. If not that night, then a day or two later?

‘‘We’ll see how he’s feeling at the end of the day,’’ Renteria said. ‘‘Usually, you don’t feel anything in the moment. You feel it later.’’

A day off is in order for shortstop Tim Anderson as he continues on a rehab assignment with Class AAA Charlotte. The plan is for Anderson — missing from the Sox’ lineup since June 25 with high sprain of his right ankle — to sit Saturday after three consecutive games in the lineup for the Knights. As in the case of Jimenez, there’s a strong chance Anderson will be back before the end of the Sox’ homestand.

Understatement alert: The offense has gone off a cliff without them.

‘‘Everybody knows how important those guys are,’’ Renteria said.

With a three-run homer in the second inning Friday, Max Kepler gave the Twins 200 long balls this season. They reached 200 in 19 fewer games than the next-fastest team — the 2005 Rangers — and are on pace to obliterate the 2018 Yankees’ record of 267 in a season.

The Sox’ annual fan convention will have a new home next year.

SoxFest 2020 will be held at McCormick Place on Jan. 24 and Jan. 25, a Friday- and Saturday-only event, a change from the customary three-day weekend gathering. It will feature more opportunities for autographs, photos, fan engagements and unique experiences, the team said.

The Hilton Chicago has played host to SoxFest in recent years.

SoxFest 2020 passes will be available for purchase starting Thursday. For more information, go to whitesox.com/soxfest.