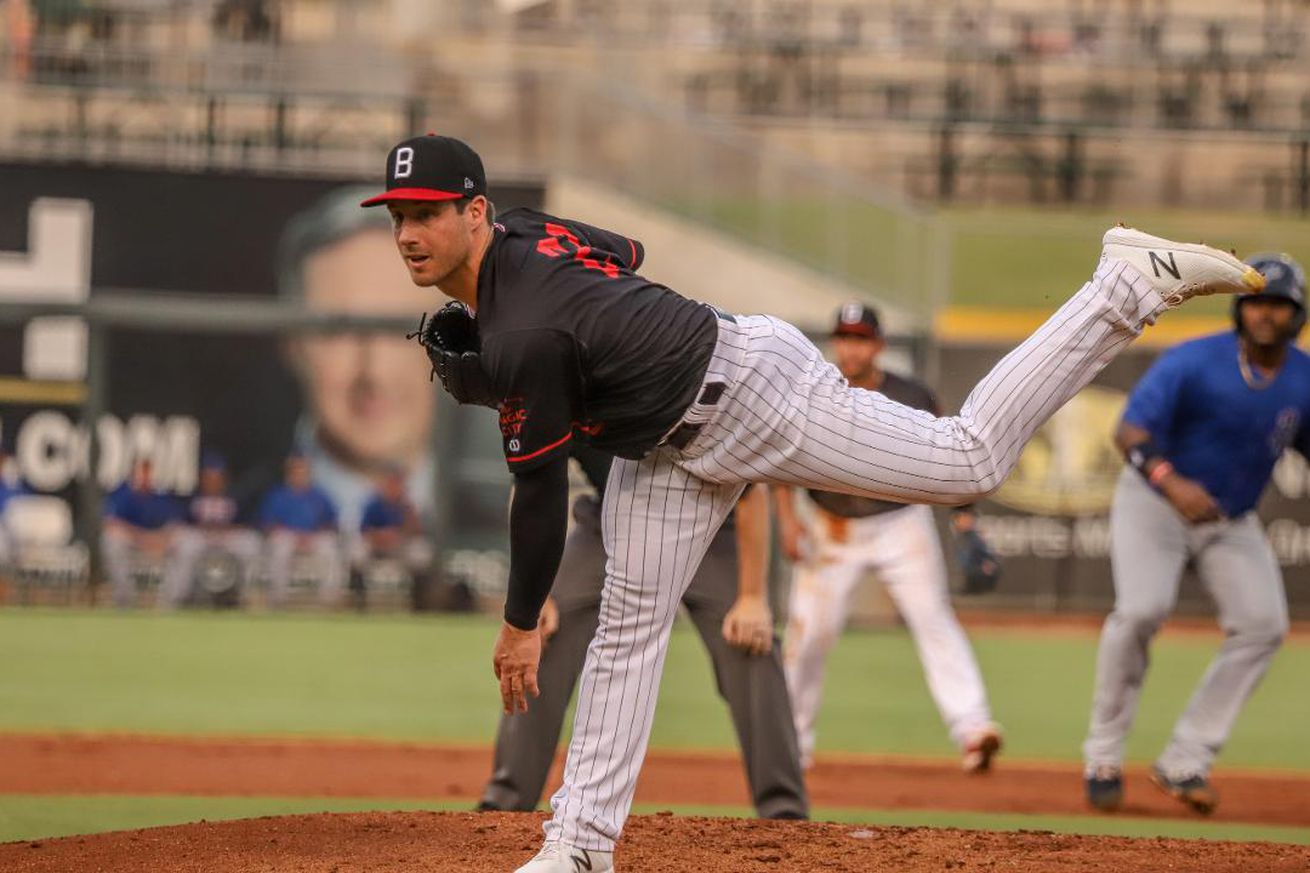 Tough luck: Matt Tomshaw pitched admirably but picked up the loss for the Barons. | Hannah Stone/@BhamBarons

Starter Justin Nicolino had a rough outing for the Knights. In the first inning, he issued a walk with the bases loaded to force in the first run of the game for either team. Nicolino then allowed a sacrifice fly, as Pawtucket took an early 2-0 lead. In the second inning, Nicolino ran into trouble again. In that inning, the first three Red Sox got hits, and they got two more before the inning was over. As a result, Pawtucket scored three more times, and they led 5-0 after two.

The Knights responded in the bottom of the second, as Seby Zavala and Danny Mendick both hit solo home runs that inning. Zavala’s home run was his 16th of the season, and Mendick’s blast was his 13th. Their home runs pulled the Knights within three, as the score was 5-2 after two.

The Red Sox got those insurance runs back and then a couple more in the fourth and fifth innings. Nicolino’s bad outing continued, as he went on to allow four more runs. After the top of the fifth, the Knights trailed 9-2, and this one appeared to be over. However, the Knights responded in a big way, and they took advantage of that juiced Triple-A baseball.

In the bottom of the fifth, the Knights scored five runs, all via the long ball. Charlie Tilson, Daniel Palka, and Alcides Escobar all went deep that inning to make the score 9-7 and pull within striking distance.

Zack Collins and Alcides Escobar both hit RBI singles in the sixth, and Escobar’s single tied the game at nine. With the score tied at 10 in the eighth, Yermin Mercedes hit the decisive blast, a three-run shot to left center to put the Knights ahead for good, 13-10. His home run was the Knights’ sixth of the day and his 14th across the minors this season.

DRIVEN BY MERCEDES! @ymercedes73 with a 405-foot three-run homer to give the Knights their first lead of the game at 13-10 going to the 9th! pic.twitter.com/g9rdW1dY6d

The Knights had a bit of a scare when Luis Robert was hit on the hand by a pitch, but he was able to stay in the game. It was his fourth hit by pitch in Triple-A and his 13th across all minor league levels this season. The Knights improved to 55-51, and the Red Sox fell to 46-59. The Knights will travel to Norfolk for a two-game series against the Tides. The first of those games will start tomorrow at 6:05 CST.

In this matchup, there was very little offense to be found. Not even Nick Madrigal, who has been an OBP machine with the Barons, managed to reach base safely today. If it is any consolation, he did not strike out (what a surprise). The Barons only got three hits, and nobody on the Barons had a multi-hit game. In addition, all of those hits were singles, and none of them reached scoring position.

On the other side, starter Matt Tomshaw pitched very well. He lasted seven innings and only allowed two runs on five hits. Tomshaw also missed a lot of bats, as he finished with eight strikeouts. With his performance, Tomshaw also reached 1,000 innings pitched as a professional. Meanwhile, the only reliever to appear in this game for the Barons was Vince Arobio, who pitched a scoreless eighth, but it simply was not enough.

The Barons fell to 47-56, while the Biscuits improved to a mighty 70-37. The Barons will face the Biscuits again tomorrow, and that game will start tomorrow at 6:35 CST.

This game got out of hand early, as Dash starter Konnor Pilkington had an afternoon to forget. The Hillcats attacked him early and often, scoring two runs on three hits (two doubles) in the first inning. The second inning was no better, as Lynchburg scored used a walk a hit by pitch, three hits, and a sacrifice fly to score three more times. By the end of the second inning, the Hillcats led 5-0, and Pilkington’s outing was over.

The bats needed a big day, and they did not have one. The Dash only managed only two hits through the first six innings, and they failed to score in those innings. The finally got on the board in the seventh, when Tate Blackman drove in a run with a single. The Dash scored again in the seventh on a passed ball that allowed Jameson Fisher to race home. However, that rally was not nearly enough to get the victory.

The Dash fell to 55-46, while the Hillcats improved to 49-54. The Dash have the day off tomorrow, but they return to play on Tuesday at 6:00 CST. That will be the beginning of a three-game series at home against Lynchburg.

Both starting pitchers got off to a fast start, as the score was 0-0 after three innings. But, in the top of the fourth, the Intimidators put together a big rally. Alex Destino and Corey Zangari hit back-to-back singles to open the inning, and Romy González drew a walk to load the bases. With two outs and the bases still loaded, Ramon Beltré hit a single to drive in the first run of the game. Ian Dawkins followed with the biggest hit of the inning, a bases-clearing double to put the Intimidators up by four.

Meanwhile, Intimidators starter Taylor Varnell remained effective. He surrendered a solo home run in the sixth. However, that was Varnell’s only significant mistake of the day, as he only allowed that one run in six innings. The bullpen also had a good game, as the relievers combined for three scoreless innings. Meanwhile, Alex Destino and Romy González added to the Intimidators’ lead with hits in the seventh and ninth innings, respectively.

The victory brought the Intimidators to 46-59, while the Grasshoppers dropped to 63-42. The Intimidators will face Greensboro again tomorrow, and that game will start at 6:00 CST.

This one got off to a rough start, as Idaho Falls designated hitter Michael Emody hit an RBI double in the top of the first to put the Voyagers in an early hole. However, though Voyagers starter Chase Solesky only pitched four innings, his line ended up being solid, as that was the only run he allowed.

Then, in the bottom of the third, while still trailing 1-0, the Voyagers put up a big, crooked number on the board. The Voyagers took advantage of a hit by pitch and an error by getting four hits and a sacrifice fly to score five times. The biggest hit of the inning was a two-run double by shortstop Lency Delgado, who ended up with three RBIs.

The bullpen’s performance was marginal, as three relievers combined to allow four runs in five innings, but it was enough to get the victory. Hits by Luis Curbelo (RBI triple) and Lency Delgado (RBI single) in the seventh were enough to ensure that the lead was safe. The Voyagers improved to 18-22, while the Chukars fell to 21-19. The Voyagers will open a three-game series against Billings tomorrow at 8:00 CST.

Starter Luis Rodriguez had a rough outing, as he dug the AZL White Sox an early hole they could not escape. In the first inning, Rodriguez allowed a triple followed by an RBI groundout. That inning was dwarfed by the following inning, when the AZL Cleveland Blue broke it open, as Rodriguez surrendered four more runs. Those runs crossed the plate on a two-run homer, a solo homer, and an RBI triple. By the time the second inning ended, the AZL White Sox trailed 5-0, and Rodriguez was done for the night.

On the bright side, the AZL White Sox’s bullpen had a great performance. Yoelvin Silven, Caleb Freeman, Hansen Butler, and Garvin Alston combined to pitch six scoreless innings to prevent the game from getting out of hand. However, it was not enough, as the offense was quiet all game long. Scoring opportunities were hard to come by. They only managed four hits (all singles), and they finished 0-for-6 with runners in scoring position. Their only run came in the ninth, when the AZL Cleveland Blue made two errors. In addition, the AZL White Sox struck out 16 times. On to the next one.

The Dominican Summer League does not play on Sundays, so the DSL White Sox had the day off. They will return to play tomorrow morning against the DSL D-Backs 1, and that game will start at 9:30 CST.