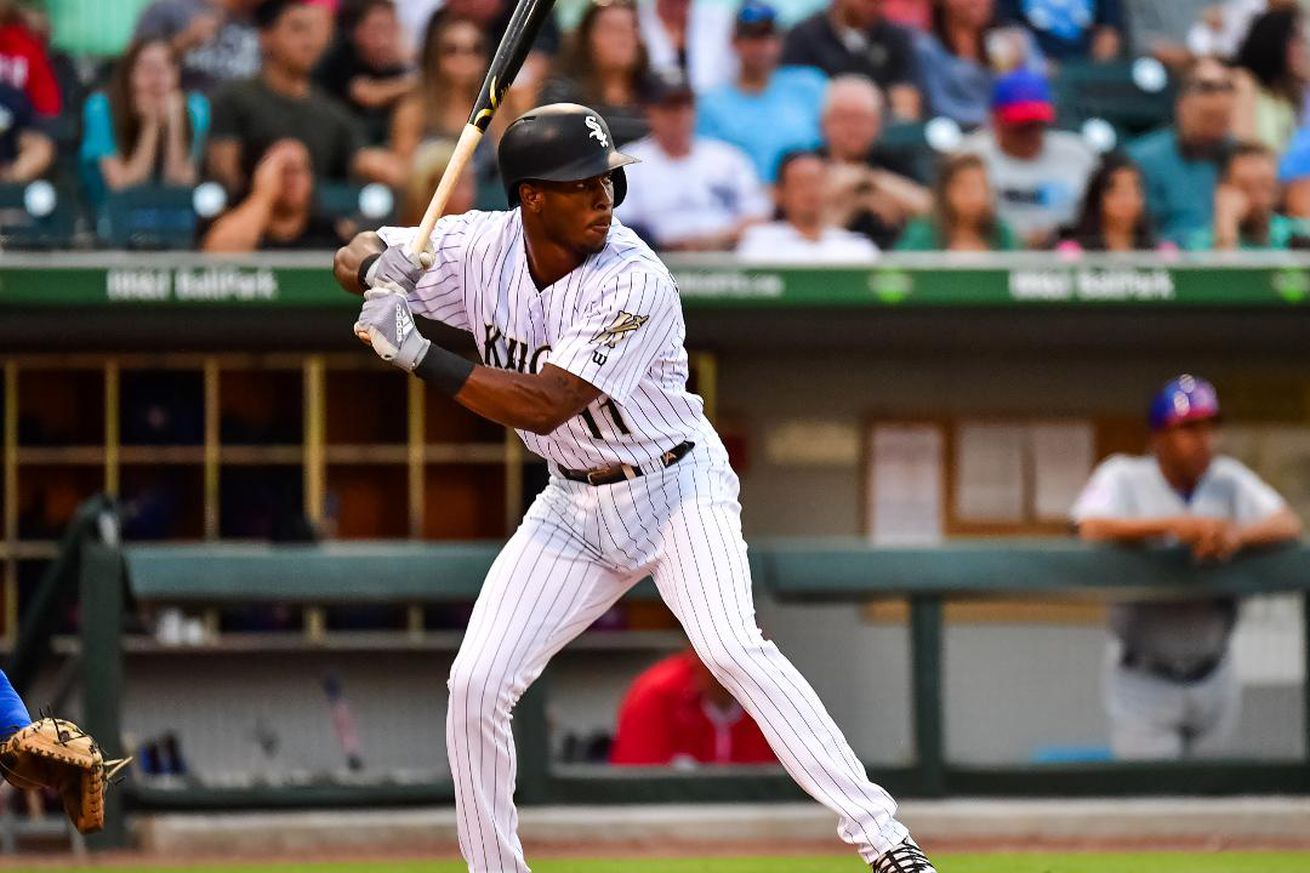 Losing five of six of one; almost getting swept in half a dozen of another

Gotta say, Pawtucket has been the bane of SSS’s existence this month, but unfortunately though we’ve gotten them off their soiled and Spicered home turf, victory did not follow. Another sold-out crowd at gorgeous BB&T Ballpark was left a smidge wanting tonight, as the Knights got diced by a late PawSox run.

Char starter Donn Roach didn’t record an out in the game, and it wasn’t because of him surrendering three straight singles to start things; it’s that that last single was a pinballer that grounded off of him. Roach kick-saved the ball and dumped it off to the right (3B Trey MIchalczewski), but left the game with a leg injury.

In news outside of Roach’s goalie work, Tim Anderson had a pretty fab game for Charlotte, making a return in time for the New York Mets series on Tuesday within bounds. TA went 2-for-5 with a home run, his first for Charlotte in three years. In four game, Anderson is hitting .389.

Our peerless leaders chose to celebrate the big blow with a curiously unintentionally ribald tweet, and at least one astute reader caught it:

Luis Robert, rehabilitating only his exuberance for a major-league callup in 2019, went 2-for-5 with a stolen base.

It was reliever Matt Foster who was pressed into duty with Roach knocked out, and he responded with wannabe starter stuff, for goodness sake: three hitless, scoreless innings, five Ks.

Pawtucket led, 5-2, heading into the bottom of the eighth when the Knights smelling salted their way into trying to win one for the Roacher. Three runs to tie came on nothing more than one Paulo Orlando RBI double, plus doses of Wild Pitch Offense and Sac Fly Offense. Game tied, 5-5, Thyago Vieira allowed a one-out single to Josh Ockimey, wild pitched him to second, then, ohboy you can smell this one a mile away, Cole Sturgeon singled in Ockimey with what would prove to be the winning run.

His acrobatic catch wraps up the first three innings with the Barons on top 3⃣-2⃣ #BuiltInBham | #WhiteSox pic.twitter.com/A5iIhLvJDM

After the Barons put up three runs in the top of the first with Lincoln Henzman starting, you had to like the chances of a win. But Birmingham evaded such a bounty against the tough Mo Biscuits, eventually falling in extras, 8-7.

The big blow in the first was a two-run single by Damek Tomscha. Montgomery came right back with two in the first, and tied it 3-3 in the fourth. The Biscuits would run off six unanswered runs in all, before Birmingham bellied up for a comeback of its own.

It was Ti’Quan Forbes and Tomscha who plated runs in the sixth to trim the Doughboys lead to 6-5, and one inning later Basabe went back to work, with a sac fly knotting the game.

The righty has retired all eight batters he has faced in relief and keeps this game tied 6⃣-6⃣ heading to the eighth!#BuiltInBham | #WhiteSox pic.twitter.com/vW4hFEZeVg

Elsewhere, Nick Madrigal extended his hitting streak to 10 games and 26-of-27.

Luis Basabe breaks the tie in the 10th

His third hit of the night is a leadoff double to bring in Joel Booker and take a 7-6 lead into the B10!#BuiltInBham | #WhiteSox pic.twitter.com/7mhHPWFjm0

But a sac fly and infield single won the game — seven straight and counting — for Montgomery. The Barons fell to 47-55 overall, and 3 1⁄2 back of the Biscuits in the second half standings.

Lynchburg scored three runs in the first, but @Craig_Deeds
gets us right back in it with a two-run shot in the sixth!

We trail 3-2 going into the bottom of the frame. pic.twitter.com/pVC4XQjDyT

Lynchburg (what a name) got all it needed in the first inning, plating three off a double and single. From there, Kade McClure was butter, choking the Hillcats and holding them scoreless.

The Dash broke through for two in the sixth, with Craig Dedelow hitting his team-best 14th for a two-run shot, trimming the Hillcats lead to 3-2. Dedelow leads the Carolina League in slugging (.467).

Down 4-2 in the ninth, W-S made a valiant run at a tie, as Jameson Fisher and Carlos Perez singled, but with runners on the corners and nobody out, Tate Blackman whiffed and Yeyson Yrizzari hit into a game-ending double play.

It was a heartbreaker for the I’s on Saturday, as the Grasshoppers (now, there’s a name) rallied for two runs in the eighth, seizing victory from defeat late.

A two-out, single-steal-single plated a run in the first for the GG’s, and the scoring stood silent from there over the next five-plus, until Kannapolis exploded for two in the seventh, off an Ian Dawkins ground-rule double, plating two.

It seemed like the sneaky-suffocating start from Davis Martin would hold up — until the eighth, when the wheels fell off for Lane Ramsey. The game was tied up in absolutely comedic fashion: leadoff HBP, passed ball (oh my, that’s 22 now for Gunnar Troutwine), sac bunt-turned single, wild pitch.

The Bisonfish hang on! GF gives up six runs in the top of the 9th but take the victory 11-10 over IDF. The @gfvoyagers win the series with their third straight. Game 5 and series finale tomorrow afternoon at 4 p.m. #SwimTheHerd #HerdTogether

Do not adjust your TV set — a White Sox affiliate did in fact win a game on Saturday. And they won it playing as the “Bisonfish.”

It was a battle of six-spots tonight, with Great Falls pushing home six in the fifth to go up, 8-4, and the Chukars throwing a scare into our Montana heroes by turning an 11-4 runaway in the ninth into an 11-10 nail-biter.

Obviously, there was a lot of offense in Montana today, which you can see detailed above. But this one came down to an emergency save by Rigo Fernandez. In the top of the ninth, Nick Johnson came on to finish off a laffer, and he failed at doing so almost as badly as you can imagine:

Fernandez relieved Johnson and didn’t do him too many favors, yielding a double and a walk that put three more earned runs on his tab. But ultimately, with the bases loaded and two outs, 11-10 game, Fernandez whiffed Tyler James on four pitches, and by the slimmest of margins, a White Sox affiliate cracked the left-hand column.

This one was over in the third inning, when the Orioles assaulted Homer Cruz for six runs, knocking him from the box with a run of homer, safe at first on third strike, walk, walk, wild pitch, single, single, single, walk. Judging solely by the ERA, this had to be Cruz’s worst start of the season.

Now, if he had just had Benyamin Bailey power behind him all game, things might have been different. Alas, Bailey got just a pinch-hitting chance this morning — and natch, he singled. The DSL club did secure nine hits, but only one for extra bases. The fellas remain a tidy six games better than .500 heading into tomorrow’s off-day, however.