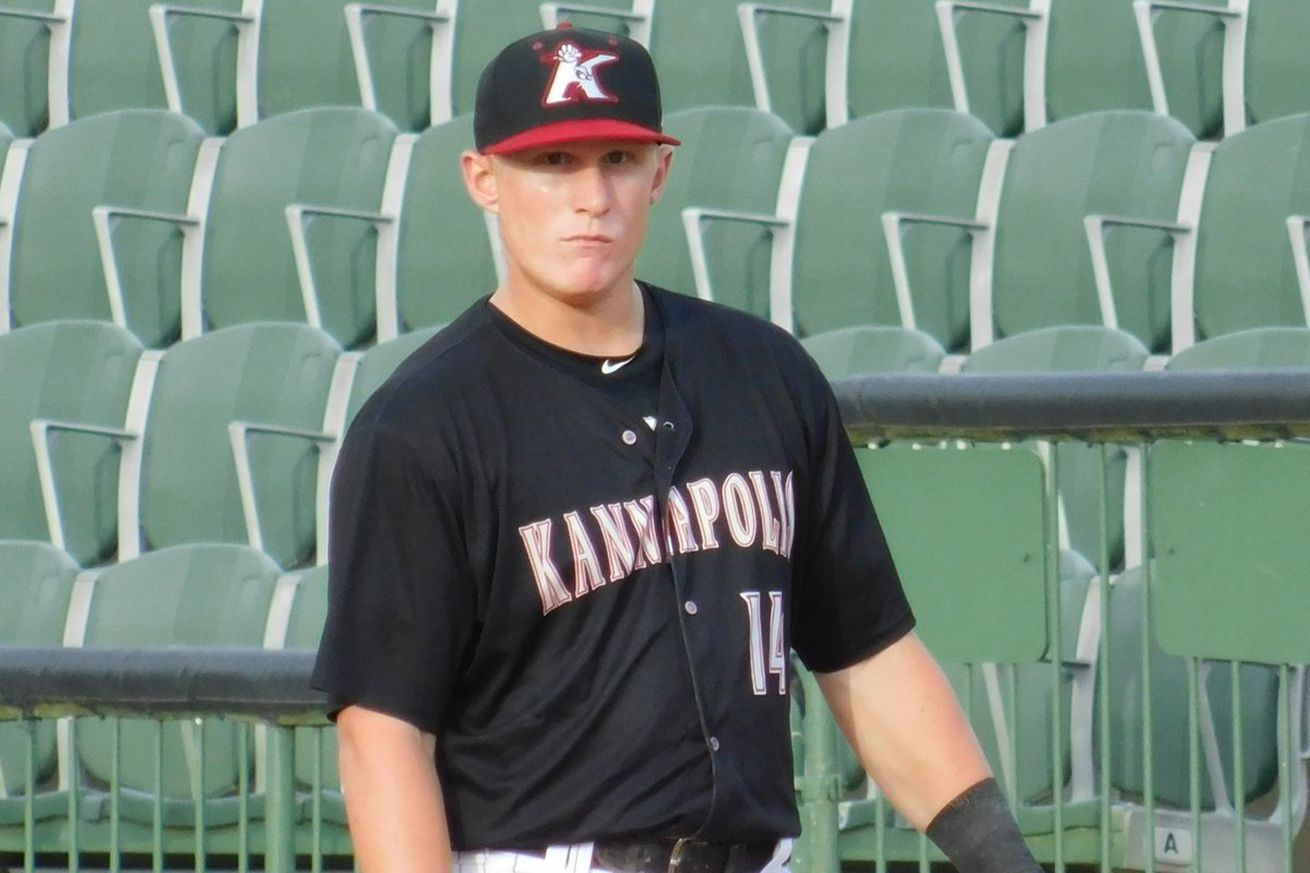 Professional hitter: Andrew Vaughn crushed another home run today, as he continues to wow in his debut. | Tiffany Wintz/South Side Sox

It all seemed to sail so smoothly for the Knights in tonight’s game. They had a 4-0 lead by the end of the fourth inning. The first run came via a double play, so no RBI there, but Zack Collins made sure he was tabbed for some runs. He drove in the second and third runs with a double into the gap, his 12th double of the year in Charlotte and one of his two hits on the night. The fourth and what would be the final run for the Knights came from the man on a rehab mission, Tim Anderson. He drove in Luis Robert on a single — that sounds like a 2020 White Sox sentence if you ask me. Anderson had three hits in his first minor league rehab assignment, all singles. He DH’ed tonight so he did not get time on the field.

After that, the pitching started to unravel and the offense could not help. Every single pitcher allowed a run, all four for Charlotte. Despaigne allowed the first two runs and was pulled in the sixth inning in favor of Matt Foster, who also allowed a run. Then Connor Walsh came in, and he allowed the tying run, and just like that, in three innings, the four-run lead was gone. But it got worse. Thyago Vieira entered the game in the ninth, hoping to keep the game tied so Charlotte could walk it off in the ninth, but he allowed four runs, three of which came off of a home run that capped off the scoring. After a 4-0 lead, Charlotte ended up losing, 8-4.

His RBI-double down the line puts the Barons on the board in the fifth!#BuiltInBham | #WhiteSox pic.twitter.com/HyMlB8nj6k

Bad offense was just not the name of the game for the Good Guys in the majors today. The Barons offense could only collect six hits, and did not capitalize with runners in scoring position (1-for-7). They also left seven runners on base and only had two extra-base hits. Of course, with how Nick Madrigal and Gavin Sheets have been hitting the ball recently, they were two of the batters to at least reach base. Madrigal drove in the lone run of the game, a double in the fifth inning that scored Laz Rivera.

The pitching was not much better. Like the Charlotte staff today, all three Barons pitchers allowed runs as well, this time though, they all allowed multiple. John Parke started the game and wasn’t able to get out of the fifth inning after allowing nine runners on base and three runs. Alec Hansen came in for relief, and did not do any better, in fact, it is probably past time to re-evaluate him as a prospect for the Sox. Vince Arobio came in as more or less as a mop-up guy and allowed the last three runs of the 9-1 loss. It was just that kind of night.

THE DASH TAKE THE LEAD!

We plate four runs in the ninth at Salem to go ahead 8-6!

For Zach Lewis and the Winston-Salem Dash, this afternoon’s game did not start so well. Though the Dash scored first, in the second inning, it was off of a double play so they should have put more runs on the board. At least early on, it looked like a big missed opportunity. Lewis, who has been struggling mightily this season with the Dash, ran into trouble in the second and third innings in allowing five runs. He allowed three extra-base hits over that two-inning span, including a two-run homer.

Jose Nin came in for relief of Lewis and beginning with him, the bullpen was able to quell Salem for the rest of the game. The bullpen combined for six shutout innings (one unearned run scored) while only allowing three hits. This stellar pitching from Nin, Kevin Escorcia, and Luis Ledo gave the offense the chance they needed to come back and win. In the last two innings, down 6-2, the Dash scored six runs to win the game, 8-2, and those runs came in a myriad of ways. Yeyson Yrizarri started the comeback in the eighth inning with a two-run single to cut the deficit in half. The ninth was the big one. First, JJ Muno tied the game with what reads as a two-run infield single. As the bases were loaded, Tyler Frost walked to take a 7-6 lead and just to add more insult to injury, on the next batter, the Salem pitcher balked home the eighth run of the game for Winston-Salem. Ledo would stay in the game to help see his win through, and retired all three batters he faced.

Attention, South Atlantic League: #WhiteSox first-rounder Andrew Vaughn has a tendency to do this. (This is his second Class A homer for @Intimidators.)

A good ole’ whupping by the I’s this afternoon against Lexington. Jason Bilous started the game and was great. The starter-to-reliever and now-starter again threw five more shutout innings to his total. As a starter, he now has a 3.74 ERA and a 1.27 WHIP in Kannapolis. Though Bilous did allow six runners on base, four hits and two walks, his seven strikeouts were able to steer any kind of damage away, and yes, a timely double play helped as well. Wilber Perez took over for Bilous from the sixth inning on, for a very rare, four-inning save. Perez was a starter last season in the DSL and skipped the Stateside rookie leagues to be a reliever with the I’s. He did not start out so well, but his ERA has fallen in every month since April; right now in July, he has a 1.08 ERA in 16 2⁄3 innings and his four no-hit innings helped with that. Perez did run into some walk trouble but because of the no-hits, the Legends could not do anything with those walks.

While these masterful pitching performances were going on, the offense was having some fun of their own.

The offense got off to a bang in the third inning, as it scored five runs. Corey Zangari, who keeps getting extra-base hits, doubled home Andrew Vaughn to open up the scoring. After an error led to the second run of the inning, Michael Hickman hit a three-run home run to right field to cap the inning with a 5-0 lead. Obviously, that big zero would continue throughout the game, but the I’s were still itching to add more runs. In the seventh inning, the new guys added three more runs. Camilo Quinteiro got his first hit of the afternoon and doubled home Hickman. Vaughn ended the scoring for the game in the next at-bat with a two-run homer to left; his second with the I’s and third this season.

The best all-around game for the White Sox organization of the night games was courtesy of Great Falls. Though the starter, Dan Metzdorf, did not have the most effective first three innings (two runs), the bullpen threw six shutout innings. But before that, the Voyagers already had a one-run lead. Caberea Weaver opened up the scoring for the Voyagers, as he hit a two-run home run to take an early 2-1 lead, however, as you know, Metzdorf would allow a run to lose that lead. Thankfully for him, the power continued for the offense. Lency Delgado hit his second home run of the year, which gave Great Falls a one-run lead, and it would be the game-winning run by the end. While that bullpen kept mowing down Mustangs, Harvin Mendoza, who has had a weird power surge, hit his fifth home run of the year, to right-center. To add a few more insurance runs, Bryan Connell drove in two on a single to settle the game at 6-2.

A game that was as slow as the White Sox’s tonight ended up in the same fashion, with a late game loss because of an inept offense. The Dodgers opened up the games’ scoring in the first inning, but that was the game’s lone run until the eighth, and the Dodgers’ lone run until the 10th.

Jeremiah Burke allowed that first run, but went four shutout innings to end his stint as starter tonight. He did not strike anyone out, so it seems like the swing-and-miss wasn’t there, but he got outs, and that is what matters. Yoelvin Silven was similarly effective when he relieved Burke, he threw two shutout innings, also no strikeouts. Hindsight is 20-20, but the Dodgers eventually scoring some runs in bunches seemed inevitable with this much contact in play. In the eighth inning, it was the Sox’s turn to score. DJ Gladney, with his third hit of the night, drove in Samil Polanco to tie the game, 1-1. It was all for naught in the end, as the Dodgers’ ability to make contact against the AZL Sox pitching finally caught up the them. In the 10th, the Dodgers scored three runs to take a 4-1 lead, and that was enough. The Sox did add a run in the ninth, but they could not match the three the Dodgers put up.

The DSL Sox win again! They were able to get out to a quick 3-0 lead in the early going. Luis Pineda opened up the scoring with a two-run homer, his first as a professional. The third run came off a throwing error by the catcher in the third inning. While the lead was being carved out, Oriel Castro was doing his thing on the mound, his thing being not allowing runs while still walking a lot of batters. He went four shutout innings, but also walked four batters. Thanks to some poor hitting, Castro only allowed one safety, as the DSL Padres could not drive anybody in. However, once the bullpen came in, that lead quickly disappeared. The Padres tied the game with a three-run fifth inning, and then took the lead in the seventh, at 4-3. However, Wilber Sanchez and the DSL Sox immediately tied the game in the next half inning. Sanchez singled home Pineda to tie the game at four. In the ninth, they took the lead for good. Johnabiell Laureano pushed the Sox ahead with an RBI double, and Pineda added an RBI triple for a much-needed insurance run. It was much-needed because the bullpen allowed a solo homer in the bottom of the ninth to put the game at 6-5. Thankfully, that is where it stayed.