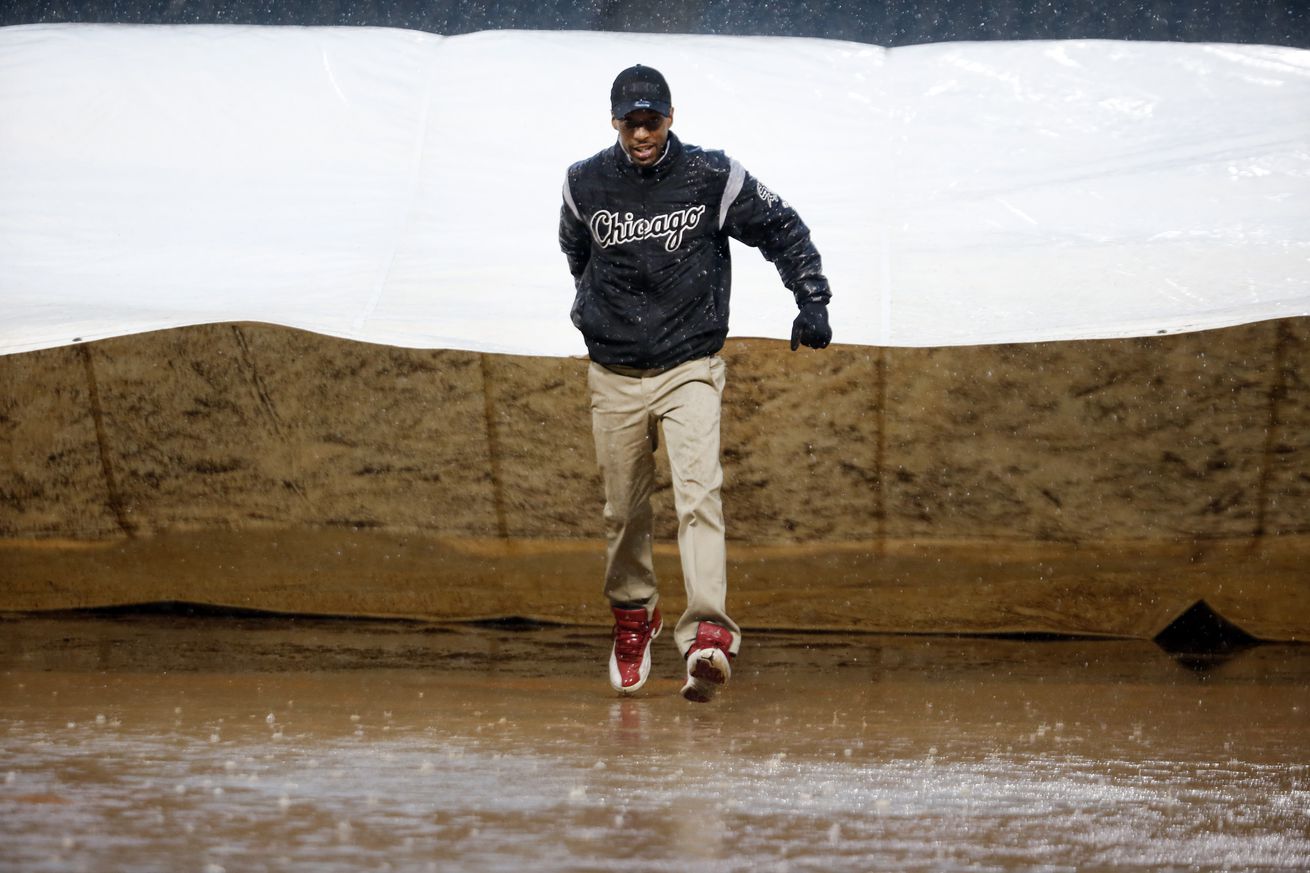 To borrow the old joke, “The Indians and White Sox played this afternoon, and baseball lost.”

So, too, did the Sox, 5-2, ending their five-game winning streak, falling back to third place, and dropping two games under .500 in a mistake-filled contest. And they can’t blame it on any Gamethread jinx.

Things didn’t start out un-basebally. Yoan Moncada made a terrific play on Francisco Lindor to start the game:

Then, in the second, Charlie Tillson robbed Jason Kipnis:

The two plays helped Ivan Nova maintain his side of a scoreless game, though both he and Indians started Jefry Rodriguez gave up numerous 100 mph plus shots.

It was the bottom of the third when the ditziness started. Tim Anderson singled, Yolmer Sanchez walked, Tillson ditto, bases loaded nobody out, A big inning set up, right?

Wrong. After Leury Garcia hit a sac fly to put the Sox up 1-0, this happened:

Just your typical 1-6-5-3 DP without a pitch. Is there a nifty acronym for a multiple TOOTBLAN? Guess we need one, as both Yolmer and Charlie screwed up big time.

The lead didn’t last long. In the top of the fourth, Moncada blew a routine throw on a grounder from Oscar Mercado, who then came around on a Carlos Santana single and Kipnis SF. (After a middling play by Moncada later on, Jason Benetti said Yoan had a geat day in the field. Doubt Moncada would agree.)

In the bottom half, Cleveland tried to hand over some runs, with two errors on what should have been a double play, putting runners on second and third with one out, but Eloy Jimenez popped up and Yonder Alonso K’ed.

Bottom five, Oliver Perez came in for Rodriguez, who apparently developed a tight right lat, which is one of the more rhythmic injuries available. He cruised through 1 2⁄3 before being replaced by Adam Cimber.

Nova, who had a low pitch count, in part because he got only five swinging strikes, came out for the seventh and gave up a double to Jake Bauers and a 403’, 105.9 mph shot to Leonys Martin to make it 4-1.

Sox had a chance to make inroads in the bottom half. James McCann walked, Jimenez doubled, but with runners on second and third and no outs all we could get was an Alonso sac fly.

It started to rain in the ninth, when the Tribe added an insurance run. Jace Fry, who’d had an easy eighth, walked Bauers, who went to second on a grounder, at which point Ricky Renteria decided for some bizarre reason to bring in Kelvin Herrera in a two-run game. Naturally, .164 hitter Kevin Plawecki delivered an RBI single, with an accompanying throwing error by Garcia.

They didn’t need the run. The Sox were mowed down by the Indians’ relievers, with Brad Hand needing just 11 pitches, including two strikeouts, to get through the ninth.

The Sox had a couple other good plays, including a nice Tillson-Sanchez-Anderson relay to cut down Lindor trying to stretch a single. They were willing to accept five walks, which is unusual, but they only had four hits, two by Eloy.

Still, the game had a feeling of sloppiness on both sides. The Sox blew several chances, going 0-for-4 and two SFs with runners in scoring position to go along with the double TOOTBLAN.

The Sox should have the pitching edge tomorrow afternoon, with red-hot Lucas Giolito facing Zach Plesac, making only his second major league start – though the first one was a nifty 5 1⁄3 inning, one run, no-decision against the Red Sox.