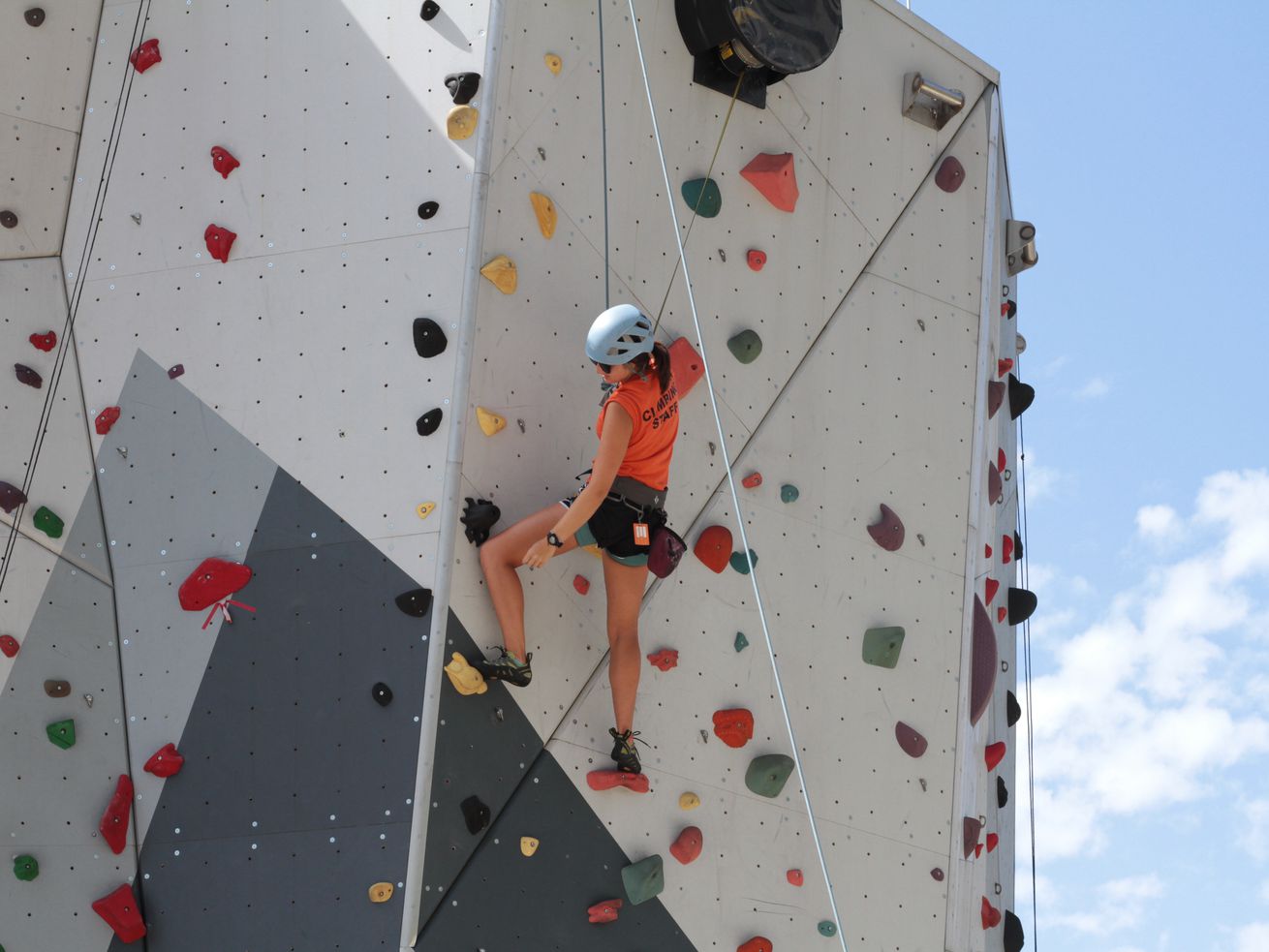 Whether you’re looking to take it easy or get your adrenaline flowing, there are tons of awesome ways to have fun in the area this summer.

Chicagoans love summer — truly, madly and deeply, in a way only people who’ve survived a polar vortex can.

The arrival of shorts-and-sandals weather signals a kind of citywide imperative to spend as much time outdoors as possible. But have you ever noticed how so much of that activity — all the jogging and biking and kayaking — looks and feels a lot like a workout at the gym?

Yeah, the lakefront path has a lot more going for it than the average treadmill, but still, where’s the fun?

The season is fleeting, so why not enjoy it? This summer, get out and play — grunting and sweating optional.

Get Into the Swing of Things

You know what sport doesn’t take itself too seriously? Miniature golf. It’s impossible to keep a straight face when putting at wacky obstacles.

Novelty Golf & Games in Lincolnwood (better known as the Bunny Hutch) is the perfect place to while away a summer afternoon. There are two kitschy mini-golf courses to choose from, both with goofy themes and deceptively challenging holes, plus batting cages and a small game room. The mini-complex also includes a diner-grill, serving up hot dogs, burgers and more.

City Mini Golf started as a pop-up but found a permanent home in Maggie Daley Park. The course has such great views of the Chicago skyline, it’ll be hard to keep your eye on the ball.

The Diversey Driving Range is well known among bonafide golfers, put the place has a sillier side — an 18-hole mini golf course nestled along Diversey Harbor.

Greens fees got you down? The Park District operates a free mini golf course at Douglas Park.

For the Thrill Seeker

Want to really get your blood pumping? Do something that’s a full leap outside your comfort zone.

Make good on that age-old dream of running away to the circus, and sign up for a real heart-in-your-throat experience at Trapeze School New York. Soar through the air along the lakefront at the school’s outdoor warm weather campus (the rest of the year, classes take place in Edgewater at Broadway Armory Park). Cirque de Soleil, here you come!

Chicago at The Garden

Put your riding skills to the test at the best dirt bike jump trails in Chicago at The Garden. Situated along the Chicago River at Richard Clark Park, in the footprint of the former Riverview Amusement Park, The Garden provides cheap thrills (it’s free!) for riders of all experience levels.

Or try your hand (and toeholds) at rock climbing. The 40-foot wall at Maggie Daley Park (in the center of the skating ribbon) accommodates bouldering, lead-harnessed and top rope climbers. Registration is on-site only, and the wall is managed on a first-come first-served basis. Visit the website for information regarding fees and requirements.

When Chicago’s ice rinks close, the city’s skate parks come alive. Bring your board and string together a skate park crawl along the lakefront. Practice your tricks on the bowls, ramps, rails and obstacles at Wilson Skate Park along the north lakefront, Grant Park (Ninth Street and Columbus) in the heart of downtown, and Burnham Skate Park to the south.

Whether you’re interested in volleyball, soccer or glow-in-the-dark kickball, the city’s sport and social clubs have a league for that. Most offer options to sign up as an individual or an entire team, and to compete at various levels.

Chicago Sport & Social Club is the granddaddy of the city’s clubs and has the most leagues, with the fast-growing Players Sport and Social Club nipping at its heels.

S3 Simply Social’s recreational leagues are staunchly co-ed — team members are split evenly between men and women. To foster camaraderie, players on all teams head to the same sponsor bar after every outing.

At LTS Chicago, teams don’t just play to win, they play for charity. At the end of the season, a pool of proceeds is divvied up among the winning teams’ chosen charities.

Ultimate Frisbee — a sort of cross between soccer and football, with a frisbee — is a universe unto itself. Ultimate Chicago is a great source for people interested in joining a league or finding a pickup game, typically in Lincoln Park, Grant Park and Evanston.

In the spirit of everything old is new again, we give you . . . bocce. The game — kind of like lawn bowling — is positively ancient, and is especially beloved by Italians and retirees, but has only recently really caught fire in Chicago.

Chicago Sport and Social is also organizing a league at Theater on the Lake.

Bocce is easy enough to play with a drink in hand, which explains why so many of the city’s bars have courts. Kaiser Tiger, Park & Field and Saint Lou’s Assembly are among the standouts.

The Chicago Park District has a handful of courts — but truly any patch of grass will do.

You know all those places you’ve zipped past in the car, thinking, “Hmm, that looks cool?” Now that the wind isn’t whipping frozen daggers at your face, take a stroll to get to know your city.

The Chicago History Museum has walking tours of neighborhoods from the Gold Coast to Bronzeville, Old Town to Pilsen, and also leads guided strolls through some of the city’s quietest areas — Graceland and Rosehill cemeteries. chicagohistory.org/events/

All this walking is bound to make a person hungry. The Chicago Architecture Center has the perfect solution: A tour of buildings that date back to 1893, the year the city hosted the now famous Columbian Exposition, coupled with a sampling of foods introduced at the World’s Fair. We’re talking about hot dogs, caramel corn and brownies.

Chicago for Chicagoans tours are just that — aimed at locals and led by neighborhood experts, who provide an insider’s view of their community. Upcoming tours include McKinley Park, Rogers Park, Chinatown and Albany Park, and the cost is pay-what-you-can. Tours typically end at a restaurant where folks are encouraged to enjoy a group meal and conversation.

Make a game of things by signing up for any one of a number of quests or scavenger hunts. Companies like Urban Adventure Quest, Strayboots and Watson Adventures Scavenger Hunt will get you started on your search for new and unusual experiences in the city.

For such a big city, Chicago has a surprising number of places to get close to nature.

At 58 acres, North Park Village Nature Center on the Northwest Side is big enough to create the illusion you’ve left the city altogether (provided you ignore the airplane traffic overhead). Trails wind through woodland, wetland, prairie and savanna. No visit is complete without a deer sighting.

The West Ridge Nature Preserve’s 20 acres of meandering paths were carved out of an unused section of Rosehill Cemetery, which isn’t as creepy as it sounds. The preserve features a fishing area, nature play space and native plants.

The Burnham Prairie Burnham Wildlife Corridor stretches along the lakefront from McCormick Place to 47th Street and the South Shore Nature Sanctuary has six acres of dunes, wetlands, woodlands and prairies in the shadow of the South Shore Cultural Center.

Bird watching is a popular activity at all of the city’s natural areas. The Montrose Point Bird Sanctuary (aka, the Magic Hedge) is a particularly excellent spot to keep an eye out for our feathered friends. Check out the Chicago Ornithological Society’s website for information on upcoming birding events and field trips around the city.

Practice your survival skills — hey, a zombie apocalypse could actually happen — at a Chicago Area Orienteering Club event, held in area forest preserves. Courses are designed for beginner, intermediate and advanced levels. Just pick up a map, head out in search of specific natural features, then find your way back to the start point.

Further afield, the Indiana Dunes is now a National Park, and that’s a pretty big deal, especially east of the Mississippi. Explore 50 miles of hiking, biking and horseback riding trails; tour some of the park’s historic buildings, including homesteads from the 1800s; or just loll on the beach.

Summer can be oddly stressful — there’s so much pressure to have the most fun all the time because winter is coming. Chill out with yoga. Outdoors, of course.

What better way to start the day than sun salutations under the actual sun. Beach Yoga offers a range of classes at Montrose and North Avenue beaches, including AcroYoga — that’s acrobatics combined with yoga, set to live reggae music.

Free summer workouts on Millennium Park’s Great Lawn are back in 2019. Swing by for yoga classes on Tuesday and Thursday mornings; on Saturday the slate of fitness options expands to include pilates, tai chi and zumba.

Other options for yoga in the parks include free weekly sessions in Wicker Park, Horner Park and the Garfield Park Conservatory. Horner Park’s class syncs up with its outdoor farmer’s market, too.

Call It a Night

We’re exhausted just reading about all the things to do this summer. Let’s wind things down just staring at the stars. Joe Guzman, resident astronomer with the Chicago Park District, hosts observation sessions, dubbed “star parties,” at parks around the city, including the 606 Trail. Follow on Facebook for postings about upcoming events.