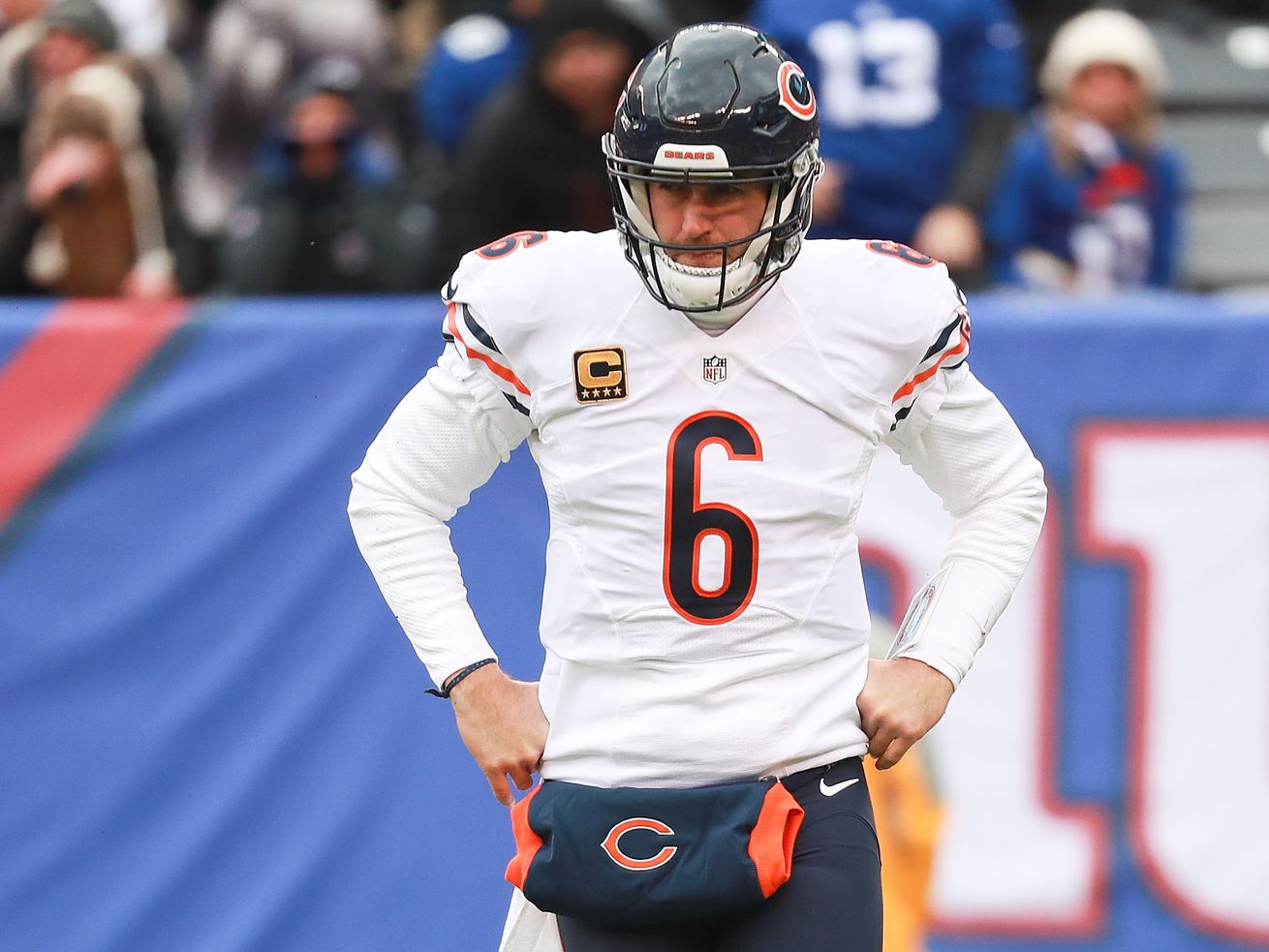 Rather than blame the people who rated Cutler so low or call out Cutler for his erratic career, let’s lay the condemnation at the wingtips of the people who couldn’t draft or acquire more than the handful of quarterbacks good enough to end up on a top-100 list: Bears ownership and management.

Jay Cutler is the gift that keeps on giving.

More than two years removed from his career in Chicago, he’s still a topic of hot debate. We spent the past year critiquing his appearances on his wife’s reality TV show. He was either a comedic genius or the mope we always thought he was. Now we’re back on familiar ground, discussing whether he was any good as a Bears quarterback.

An upcoming book tied to the franchise’s 100th anniversary from Pro Football Hall of Fame writers Don Pierson and Dan Pompei includes a ranking of the top 100 players in team history.

Given the tug-of-war that has been waged over his merits since the Bears traded for him in 2009, it’s no surprise this has set off the kind of heated exchanges normally reserved for boxing weigh-ins.

But rather than blame/praise the authors for their ignorance/acuity, and rather than call out Cutler for his erratic career, let’s lay the condemnation at the wingtips of the people who couldn’t draft or acquire more than the handful of quarterbacks good enough to end up on a top-100 list:

So far, the team has released the lower half of the top-100 list, but let’s assume Hall of Famer Sid Luckman will rank highest among the quarterbacks. One hundred years, and all that the city has to show for decades of passing and handing off are Luckman, Jim McMahon (ranked 53rd), Ed Brown (54th), Johnny Lujack (55th), Bill Wade (69th) and Cutler (85th)? That’s a lot of yellowed newspaper clippings.

It means that the Bears have had only two worthy quarterbacks since Wade helped lead the team to the 1963 NFL title – McMahon and Cutler. If we were talking about two quarterbacks hogging the position, like Brett Favre and Aaron Rodgers tag-teamed it so well in Green Bay, it wouldn’t be such a big deal.

I’m not a mathematician, possibly because I’m not good at math, but what are the odds of being given a large pool of quarterbacks to choose from over the span of 100 years and failing to find more than several good ones? A one-eyed beagle would have had better luck identifying serviceable quarterbacks than the Bears have.

One argument that has been made for Cutler being deserving of a higher ranking is that he owns many of the franchise’s passing records, including yards (23,443) and touchdowns (154). That sounds good until you realize that owning Bears passing records is like owning the best mullet.

Don’t make me list some of the men who have started at the position for the Bears. I’m finally to the point in my therapy where I don’t cry at the mention of Cade McNown.

You can understand why so much love has been slathered over Mitch Trubisky, whom the Bears took second overall in the 2017 draft. People in town are starved for a good quarterback. You can also understand why some of us are a bit reluctant to bestow Hall of Fame status on young Mitch just yet. Too much history when it comes to quarterbacks in Chicago. Too much scar tissue.

From the depths of their beings, the Bears hope that Trubisky will be near the top of a revised top-100 list 25 years from now. In the meantime, coach Matt Nagy will continue teaching him the Zen of quarterbacking and describing him as being on the cusp of greatness. Considering the slim pickings for QBs on the top-100 list, that notion is something to hold onto, like a life preserver.

It says something that after just 26 NFL starts, Trubisky is already 16th in Bears history in career passing yards and 13th in completions. That speaks of a franchise that has gone through quarterbacks like Kleenex.

The battle over Cutler’s legacy figures to go on for a long, long time. He was the kind of player who divided Bears fans. He was up and down and rarely in between. He could be grumpy and engaging. For all those team records he holds, he was 51-51 as a Bears starter. If there’s one stat that tells the story of Jay Cutler, in all his glory and disappointment, it that’s one.

The Bears began their organized team activities Tuesday at Halas Hall. They have high hopes for the 2019 season after making the playoffs last season. But it’s a bit humorous that after that success and with so much optimism as the players go through drills, we’re still talking about Cutler. He’s one of those people who can be 1,000 miles away and right on your front porch.

Oh, and that ranking by Pompei and Pierson? The one that has Cutler 85th?