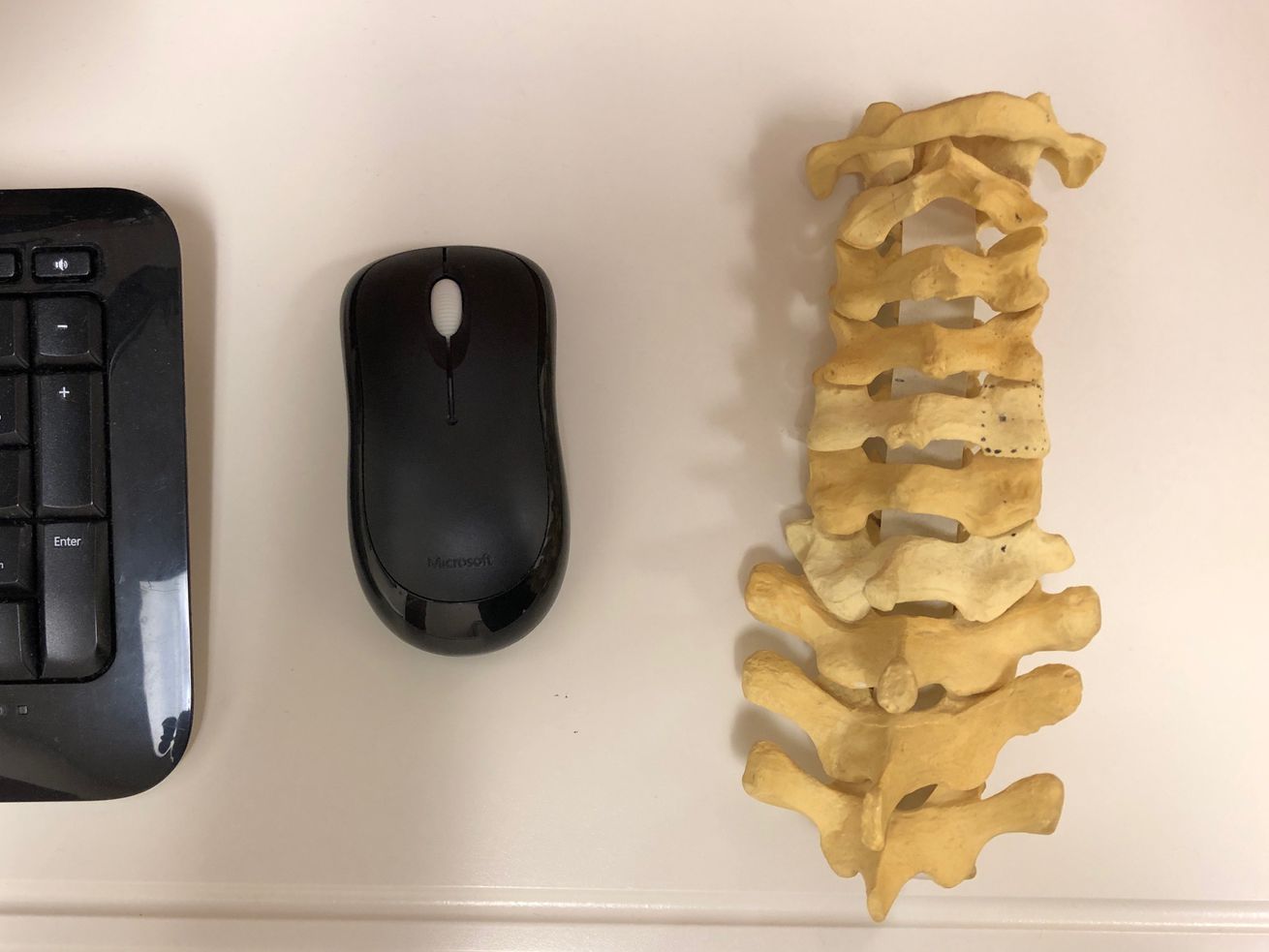 The surgeon at Northwestern brought in this helpful spine model in case I needed to be shown exactly what we were discussing. | Neil Steinberg/Chicago Sun-Times

The doctor breezed in, glanced at the MRI and said I needed a C4-6 anterior cervical discectomy and fusion and C5 corpectomy — in English, cutting into the front of my throat, sawing open three vertebrae and replacing a couple collapsed discs with wedges made of corpse bone.

How’s your summer going? Mine has been spent recovering from spine surgery. Not something that typically goes into the newspaper. But I found the process interesting, and hope you do, too. I’ll relate the story this week in three parts. If I’m wrong, well, there’s always next week.

It couldn’t be a normal ailment — no cancer, no heart disease. Oh no, no, not for me. Odd duck that I am, it had to have something obscure: stenosis, which sounds like zeneosis, the imaginary disease I cooked up to entertain my boys when they were small and we’d visit their zayde at Skokie Valley Hospital. I had fun imagining ever-more terrifying Hot Zone symptoms, and threatened to to march them up to the Zeneotic Ward to see for themselves if they didn’t behave.

Stenosis is real, however, a narrowing of the spinal vertebra. I learned I had it in 2015, getting a CT scan after I slipped walking the dog. The doc suggested I “keep an eye on it,” and, like any sane man, that meant I ignored it completely.

But six months ago my hands started to go numb. Not that numb; I still could type. So no big whoop, we’re all numb nowadays, more or less. I employed the same ignore-it-and-hope-it-goes-away strategy that worked so well when the interior light on the Honda Odyssey started flashing during hard right turns. Eventually, the problem fixed itself. Truly, a miracle.

But this didn’t go away. It got worse. My feet started getting numb too, then my calves. Unlike Republicans with climate change, I connected the dots and saw where this was heading. Plus my wife told me to go to the doctor, and I’ve learned to listen to her.

My physician ordered an MRI. (Practical tip: Pay an extra $10 and they’ll give you a DVD of the image you can tote to future consultations.) Later, his office called to say the stenosis was severe and compounded by a bone spur. He suggested I see a surgeon at Illinois Bone and Joint Institute.

Now, I want to stress that the Bone Joint seems a fine, if vast and sprawling, establishment, though something of a mill. Think Costco, if Costco replaced hips and knees. The doctor breezed in, glanced at the MRI, and said I needed a C4-6 anterior cervical discectomy and fusion and C5 corpectomy, or, in English, cutting into the front of my throat, sawing open three vertebrae, replacing a couple collapsed discs with wedges made of corpse bone, screwing in a titanium plate to keep everything in place and plucking out the bone spur.

What about physical therapy? I croaked.

“Don’t waste your time,” he said. We could operate in a couple weeks.

I don’t believe I actually made the “Time out!” gesture, bouncing the flat of one hand on the extended fingertips of the other. I did say, no offense, but I’d like a second opinion. I was hoping for a treatment involving an injection, or a fit young person teaching me to bounce on a big rubber ball.

Stenosis turns out to be common as dirt. My not being familiar with it did not ipso facto make it rare. Almost a million spinal surgeries are performed in the United States annually — about the same number as circumcisions. I find that hard to believe, but a fact nevertheless.

I googled “Best spine care in Chicago” and Northwestern Medicine popped up. They had 17 specialists, I read each bio, carefully, and settled on Dr. Alpesh A. Patel, because he specializes in cervical (aka neck) work.

I phoned his assistant, and she assured me surgery is the last option. Physical therapy, drugs, no rush to the knife here at Northwestern. That sounded great — I was still hoping for a treatment involving whale song, or maybe someone rubbing my neck with fragrant oil. No rush. She made an appointment toward the end of July. I casually mentioned there was no need for an MRI, because I had already taken one.

“Oh, you have an MRI?” she said. Could you send the results? Sure!

She phoned back an hour later, a changed woman.

“I’ve moved your appointment to Tuesday,” she said. “I’d have you see the surgeon tomorrow if I could.”

Coming Wednesday: Oh by the way, this operation could leave you completely paralyzed.