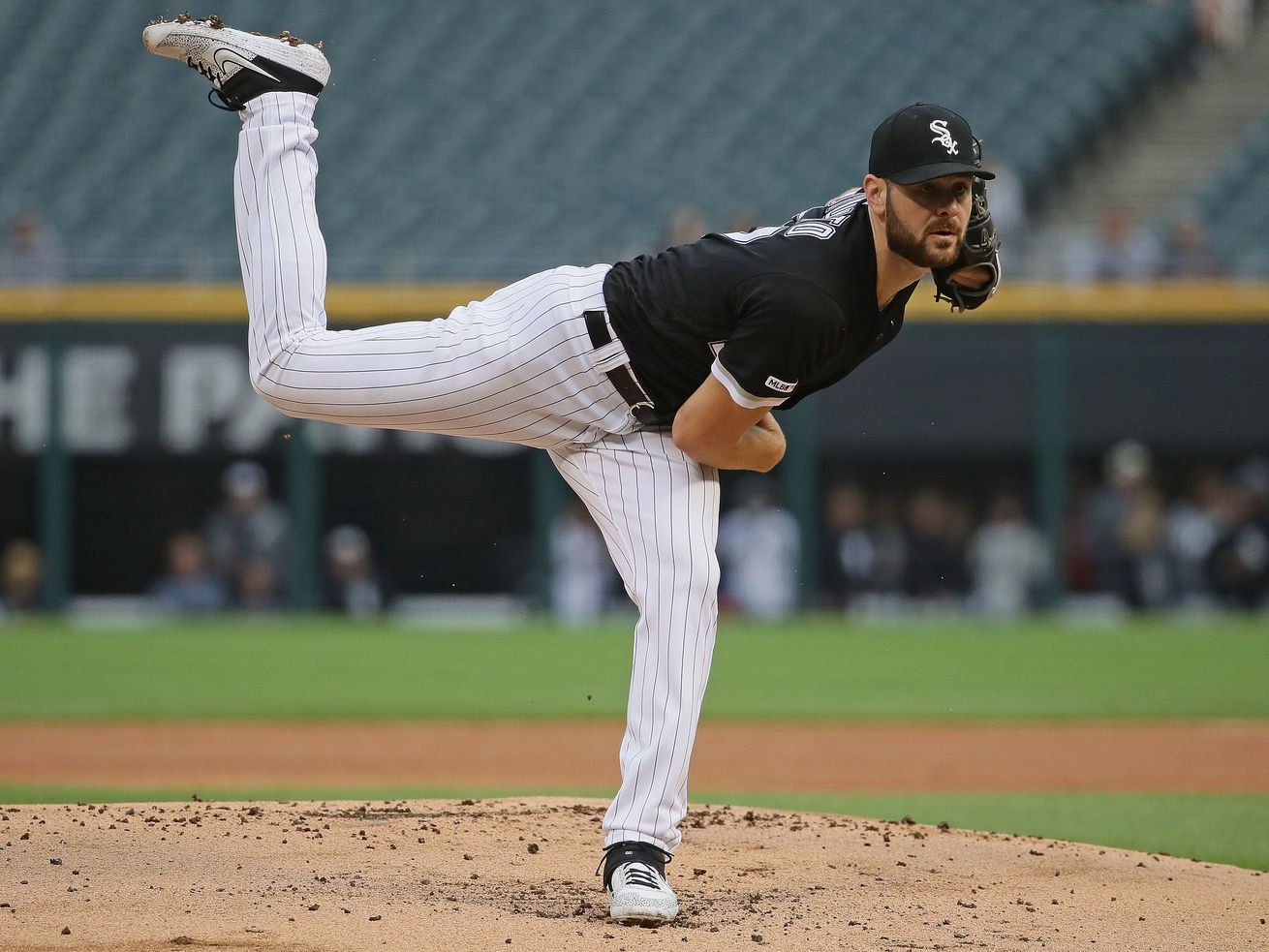 After Sanchez knocked in the game-winner in the suspended game, Giolito turned in his latest stellar start.

Yolmer Sanchez finished a game he said never should have started.

Lucas Giolito finished strong after a bad start, following Sanchez’s walk-off heroics with yet another stellar performance to give the White Sox a second victory against the Royals in one day.

With a walk-off single in the ninth inning, Sanchez gave the Sox a 2-1 victory Tuesday in a happy finish to the suspended slosh-fest he had tied the day before with an RBI single on a flooded field in the fifth.

Giolito then matched a career high with 10 strikeouts in eight innings of three-run ball in the 4-3 victory that followed.

‘‘It was awful, to be honest,’’ Sanchez said of the conditions Monday. ‘‘It was really awful. I’ve never seen a baseball game in those conditions.’’

Head groundskeeper Roger Bossard turned a field that Sanchez said was a health risk to the players who pitched, ran and hit on it into a normal, playable surface.

But before getting back on the field for a 4:40 p.m. resumption Tuesday, the cheerful and playful Sanchez had his say. The umpires, nudged by Major League Baseball to do what they could to avoid a rainout, went too far in trying to get five innings in for an official game.

‘‘I don’t like to talk a lot; I like to do my job,’’ Sanchez said. ‘‘But that was a really bad call yesterday. Somebody can get hurt batting, running, whatever. And they know it’s going to rain.’’

After scoring James McCann with the game-winning single, Sanchez dodged teammates who came out to mob him, zigzagging through the infield before they got him.

‘‘We just had 30 minutes before the second game, so I just tried to go inside and get ready,’’ Sanchez said. ‘‘But they got me.’’

Somebody forgot to tell Giolito how much time there was between games, though. Thinking the start was at 7:10 — it was at 6:40 — he was late going out to warm up. And perhaps that affected him when he allowed a three-run home run to Alex Gordon in the first.

‘‘He wasn’t able to do his normal routine,’’ catcher McCann said. ‘‘You could kind of see him rushing. Once he got through that first, he settled down.’’

‘‘That first inning was kind of a continuation of my warmup, you could say,’’ Giolito said.

Giolito (7-1, 2.85 ERA) quickly returned to the dominant form he had displayed in his last six starts with seven scoreless innings from the second through the eighth. He’s the first Sox pitcher since Chris Sale in 2016 to win six starts in a row.

After Gordon’s homer, Giolito — who allowed only three hits — retired 20 of the next 21 batters he faced through the seventh. He allowed a leadoff single to Cam Gallagher in the eighth, but pinch runner Terrance Gore was caught stealing. Giolito then retired Billy Hamilton on a ground ball and struck out Nicky Lopez for a third consecutive time to end his outing.

The Sox scored three times against right-hander Brad Keller in the third on an RBI single by Leury Garcia and sacrifice flies by Jose Abreu and Yonder Alonso. Charlie Tilson singled home McCann, who went 3-for-4 to raise his average to .350, with the tiebreaking run in the fourth.

Alex Colome, who pitched a perfect ninth to earn the victory in the suspended game, worked a perfect ninth for his 10th save in as many chances to preserve Giolito’s victory. He has retired the last 20 batters he has faced.