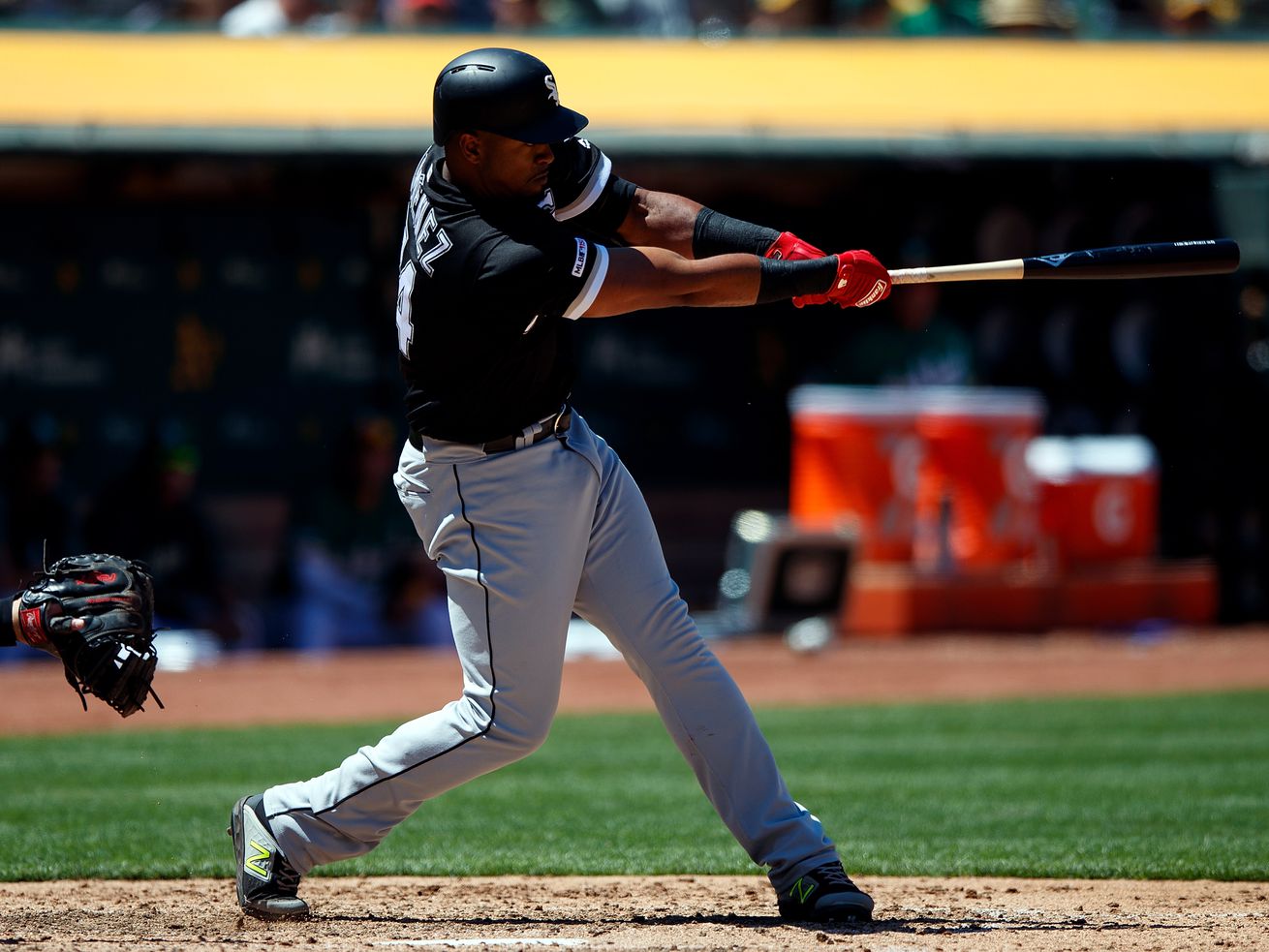 The Sox have missed rookie outfielder Eloy Jimenez’s power in the time he has been on the injured list. | Jason O. Watson/Getty Images

Jimenez expects to return soon from a bruised ulnar nerve in his right elbow that has kept him out since July 16.

Rookie outfielder Eloy Jimenez spoke Saturday as though he could have jumped out of his seat and returned to his spot in left field and to the middle of the White Sox’ lineup.

Jimenez said he feels good and has experienced no residual pain from the bruised ulnar nerve in his right elbow that has kept him off the field since July 16. He was eligible to come off the injured list Saturday and said the Sox will decide when he’s ready to play.

‘‘I feel really good,’’ he said. ‘‘Responded well. Everything feels pretty good, pretty normal. Now it’s just maybe a couple of more days, and [I’ll] be back on the field.’’

Jimenez suffered the injury when he collided with Charlie Tilson during a game in Kansas City. He immediately appeared to be in significant pain and said he initially thought he would be out for the season. He felt numbness in his fingers and couldn’t feel his hand.

‘‘After the MRI, they said 10 days, let’s work for that,’’ Jimenez said. ‘‘Now I feel really good. The pain was there for four days. After that, I didn’t feel it anymore.’’

Jimenez played catch with coach Daryl Boston before the Sox’ game against the Twins and continues to extend himself as he nears his return.

Manager Rick Renteria said Jimenez should be back soon and likely won’t need a rehab assignment.

‘‘He’s been able to manage everything here, and it hasn’t really been that long in terms of time,’’ Renteria said. ‘‘It would be nice to get him some at-bats, but he’s swinging and doing everything he can right now.’’

The Sox called an audible with rehabbing shortstop Tim Anderson.

They originally planned to give him a rest Saturday at Class AAA Charlotte, but he went 2-for-5 with a home run as the designated hitter and will play again Sunday before a team day off Monday. He is 7-for-18 (.389) with four RBI and three runs scored in four games with the Knights.

Anderson has been on the injured list since suffering a high sprain of his right ankle June 25.

Third baseman Yoan Moncada was back in his familiar spot, batting second against the Twins. He responded by going 3-for-4 with his 20th homer and two doubles in the Sox’ 5-1 victory.

Moncada went 4-for-20 with two homers and five RBI in the Sox’ last five games as their cleanup hitter.

Renteria said he wants to continue exposing Moncada to different spots in the lineup and indicated the Twins starting left-hander Martin Perez was a good opportunity for the switch-hitting Moncada to return to the 2-hole.

‘‘The fact that we’ll be facing a lefty allows me an opportunity to match up as many of the guys that I have in the lineup,’’ Renteria said before the game. ‘‘It puts me in a situation where I can put him in the 2-hole and allow the rest of the guys to put themselves where they’re at and try to see if we can generate some offense.’’