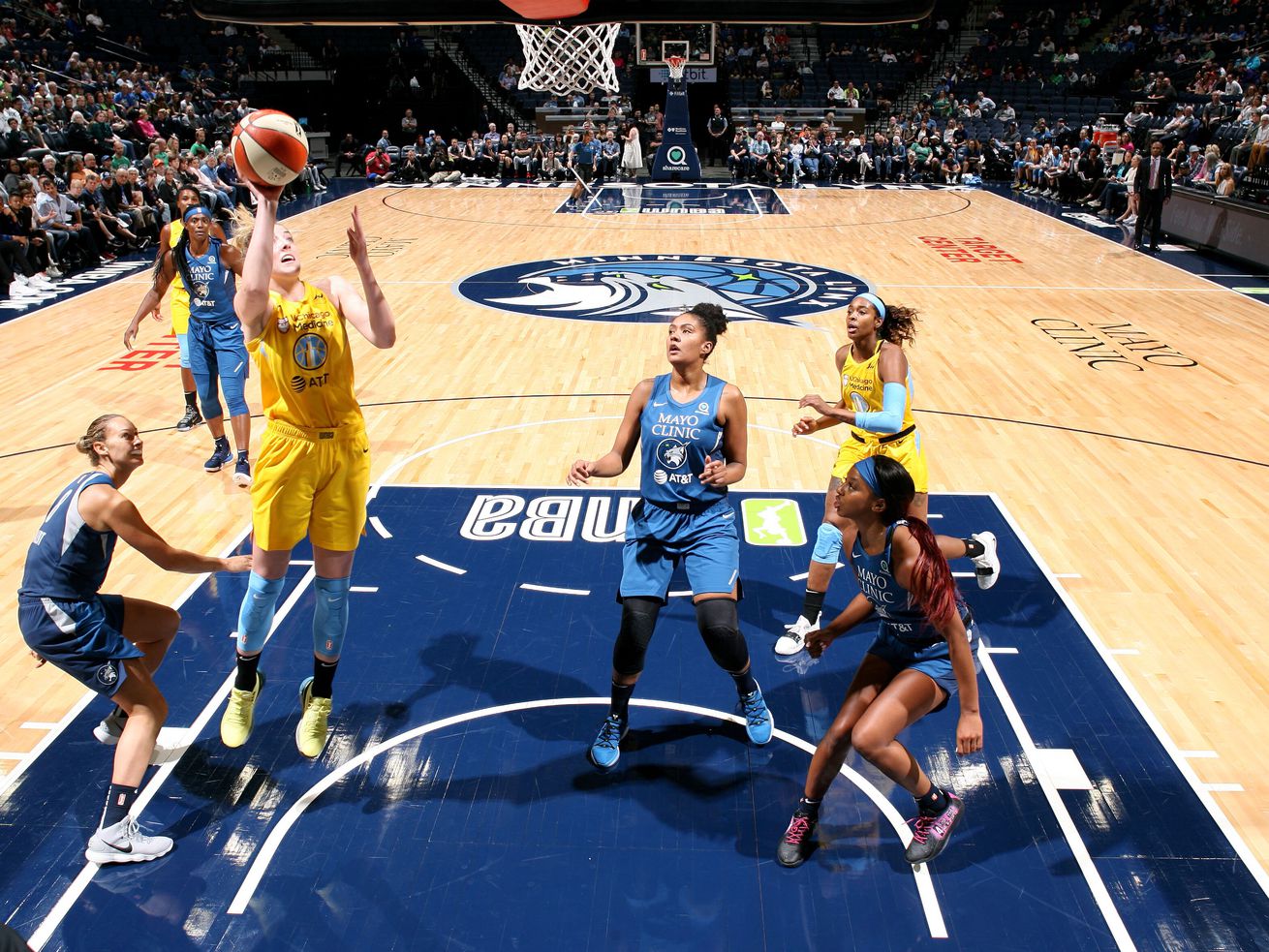 MINNEAPOLIS — Sky rookie Katie Lou Samuelson hustled back on defense, planted her heels just outside the charge circle and took 199 pounds of Lynx rookie Jessica Shepard right in the chest.

Samuelson, of UConn, and Shepard, of Notre Dame, were doing business like old times, but this was the first appearance in the first quarter of the first game in the WNBA career of each player. For Samuelson, the No. 4 overall draft pick in March, it meant a very first pro “stat” that didn’t even dent the scorebook.

Still, what better way to make an impression on a new team than by taking a charge?

“I want to contribute,” Samuelson said. “I want to get out there and make sure that my team knows that they can trust me throughout the rest of the season.”

It was an up-and-down — OK, mostly down — night for the Sky, who lost 89-71 in the season opener for both teams. The defensive end was problematic for a team that ranked last in the league in defense a season ago. Not enough stops meant very little of the transition offense coach James Wade wants to see. Rebounding? Turnovers? Too few of one, too many of the other.

It wasn’t such a hot night for Samuelson, either, turned out, especially in comparison to the work of a pair of Lynx rookies who were selected later in the draft.

But nobody said the Sky’s 14th season was going to be easy. At least, nobody said it within earshot of this sports writer, who has been around too long for Saturday night’s game to have been the first WNBA action he has ever witnessed in person.

“I don’t think there’s as much appreciation for us [in Chicago] as there should be,” said the Sky’s ninth-year point guard, Courtney Vandersloot.

With two second-year pros in the starting lineup, a pair of rookies coming off the bench and a first-time head coach in Wade, though, there probably isn’t a whole lot this team can hang its hat on yet.

It might be a third straight long season for the Sky, who finished fifth in the six-team Eastern Conference in 2017 and ticked up one spot to fourth in 2018. Then again, maybe this team can put things together. Who really knows?

Please forgive the not-so-trenchant analysis. Again, first-timer and all.

“I tried to impart with them that this could be a good loss depending on how we use it,” Wade said. “If we use it to motivate us and to learn from it, then we can come back from it well. But if we just throw it in the garbage and say, ‘OK, it’s good,’ it’s not going to be good. So we have to learn from it, and we need our veterans to step up. We also need our rookies to get better.”

Samuelson was modestly productive — four points, two assists, a rebound and a steal — in 17 minutes of playing time. It was a much different sort of night for her former UConn teammate, Napheesa Collier, whom the Lynx selected at No. 6 overall. Collier lit up the Sky for a game-high 27 points, the most points by any player in her WNBA debut since the Sparks’ Candace Parker dropped 34 in 2008.

Not only that, but Shepard, a second-round pick, led all rebounders with 13.

“We just weren’t where I thought we would be, and that’s always tough,” Wade said. “But it’s a good lesson for us. We can’t underestimate anybody, not even rookies. Players that make the WNBA, you have to have respect for them. And I don’t know if, as a unit, we gave what we could and had an expectation of them kicking our butts like that.”

But one game isn’t enough — especially for a first-timer — to have a read on this season’s Sky. As Vandersloot tells it, improvement is coming. Perhaps next weekend’s home opener against the Storm at Wintrust Arena will have a different look and feel.

“Come check us out,” she said. “If you let us grow, we’ll be up there eventually.”