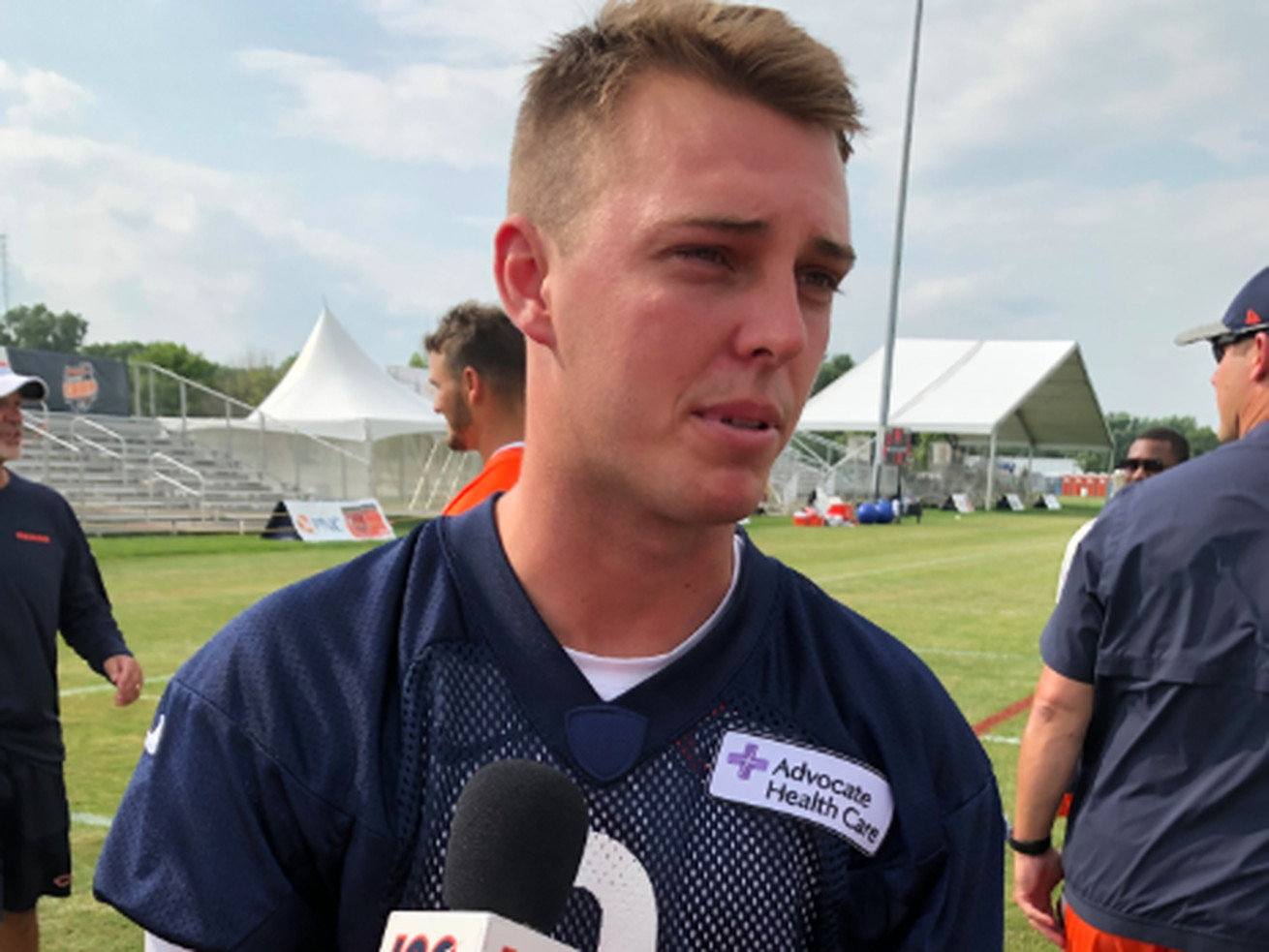 Elliott Fry is one of two players competing for the Bears’ kicker job. | Patrick Finley/Sun-Times media

Elliott Fry’s two-word tattoo looks as through it’s been pounded into his skin by a typewriter.

BOURBONNAIS — Elliott Fry’s two-word tattoo looks as through it’s been pounded into his skin by a typewriter. At the lower part of his forearm, two inches from the bend in his elbow, sits the mantra, as if emblazoned on him: “One shot.”

At first glance, the phrase makes perfect sense for a kicker: one attempt, one game at a time. One opportunity to make the Bears, to win a kicking competition that dominated the offseason.

The tattoo is more literal. It means pricking his finger to check his blood sugar, and then injecting insulin. Fry was diagnosed with Type 1 diabetes — a disease in which the body fails to produce insulin — at age 7.

His big shot started Friday, when he and Eddy Piñeiro began training camp. As camp continues, “Augusta Silence” will be replaced more and more by the roar of fans at Olivet Nazarene University.

“You can feel every kick,” Piñeiro said. “Even the warm-up kicks, every kick is meaningful.”

The Bears would like one of them to get a stranglehold on the job. Head coach Matt Nagy reiterated what general manager Ryan Pace said Sunday, though: that the Bears won’t hesitate to pivot — either via waivers or a trade — if they don’t get the job done.

“It’s like the quarterback position — there’s only one,” Nagy said. “And then, obviously when the microscope is on them — and us — because of what happened last year, they get it.

“We’ve had some great conversations amongst all of us. In the end we all have to trust one another. We understand that it is about production, and ultimately that’s what it’s going to be here this preseason, is producing. And so whatever chance that is in practice, in the preseason, what are you doing? Are you making them or are you missing them?”

Piñeiro has been in a similar situation before. In 2015, the Florida Gators were so frustrated with their kicker — who went 5-for-14 — that they held open on-campus tryouts in the middle of the season.

Piñeiro arrived the next year and made 21-of-25 field goals and all 32 extra points.

“I felt the exact same way I feel right now,” he said. “At Florida they had literally the worst guy. I came in and the fans and everybody, they were going crazy, and the attention was on the kickers.

“I feel like I performed well there, and I have to come back and do it here.”

Neither shies away from the competition.

“When you come into college, you have four guys to compete with and you’re trying to win a job,” Fry said. “In my time in the [Alliance of American Football this year], we had another kicker in minicamp, too.

“Nobody in this situation or in this league has gotten here without having to face competition.”

The kickers are pushed into closer quarters on campus. But the two, who met before either put on the wishbone C, remain friendly.

“We’re adults about it,” Fry said. “Obviously, we want to win, but we’re not weird to each other or another like that.”

Piñeiro, for whom the Bears gave the Raiders a conditional seventh-round pick in May, said — with a straight face — that he hopes Fry makes every kick. Asked if he feels pressure in the competition, Piñeiro said his faith helps him believe the result is already written.

“Chicago’s not going to go wrong with either me or Elliott,” he said. “We’re both going to play in the NFL for a long time, and we’re both good kickers.”