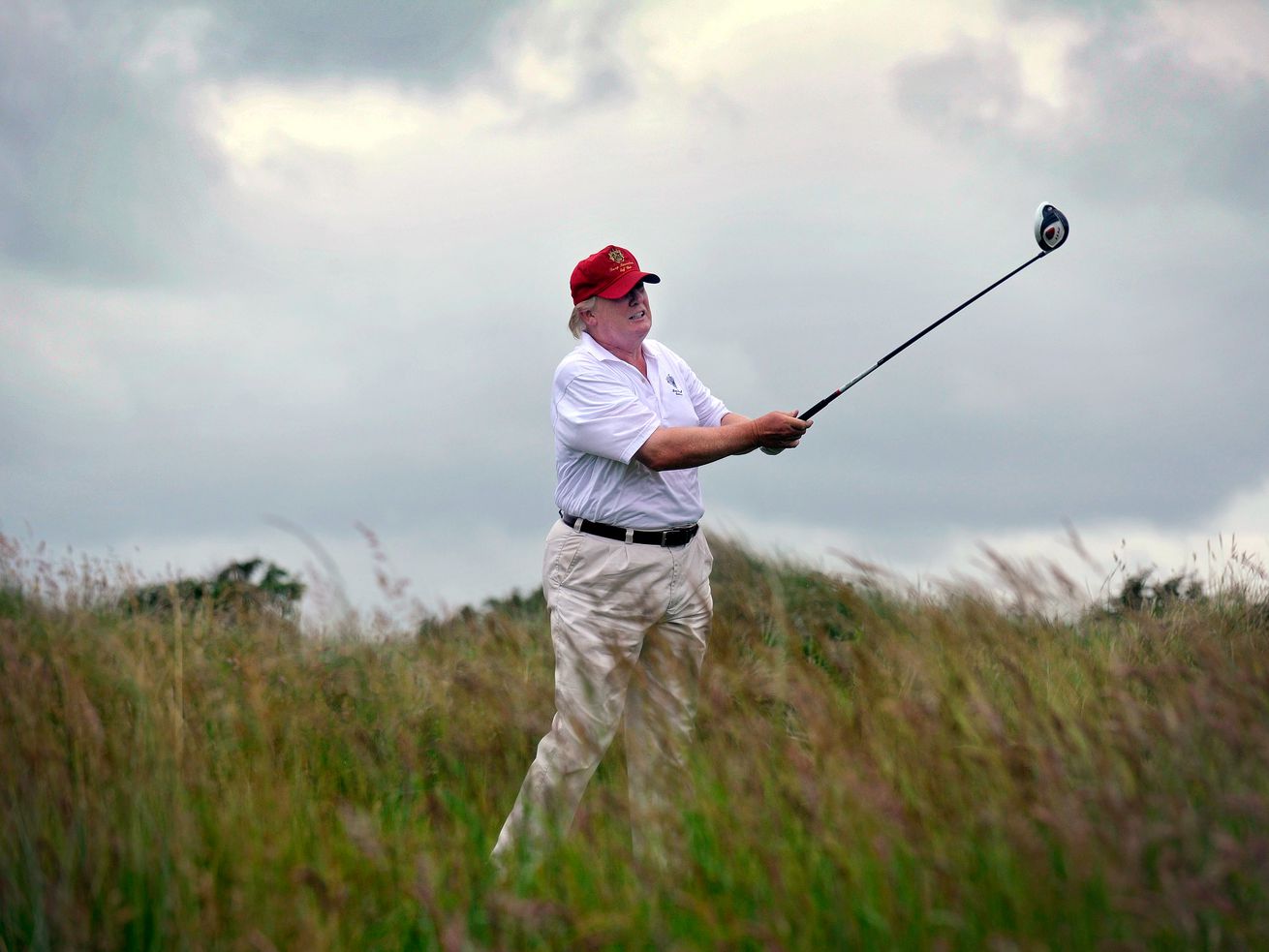 Trump claims his handicap is 2.8, which would make him a better golfer than 18-time major champion Jack Nicklaus.

A number of years ago, I was in Denver for some reason or other, and Rick Reilly and I were playing golf at a course in adjacent Littleton, where he lived.

‘‘Did I cheat?’’ I asked him out of curiosity when we spoke the other day.

That makes us different from Donald Trump, who is to cheating at golf as stink is to septic tanks.

Indeed, Reilly’s new book, ‘‘Commander in Cheat: How Golf Explains Trump,’’ shows how Trump isn’t like Reilly, me, you or just about anybody on this planet who is not a bloviating cheater with malignant narcissistic tendencies and a total lack of awareness regarding tradition, honor, dignity, fairness and even simple courtesies, such as not driving your golf cart on the fricking green!

Golf is the spine of this shocking, wildly humorous book, but humanity is its flesh and spirit.

A man who will drop a new ball when no one is looking, have his caddie kick his ball into the fairway from the rough, claim his shot never went into the water when others can see the splash and ensuing ripples, steal the crest of a famed Scottish family and claim it as his own — who actually will cheat while playing Tiger Woods! — that man should no more be the leader of the free world than Bernie Madoff or Pee-wee Herman.

An 11-time National Sportswriter of the Year, Reilly claims he wasn’t planning on writing this book. He was happy being out of the sportswriting grind after draining stints at Sports Illustrated and ESPN. He was at home in California and sometimes Italy — as he says, ‘‘relaxing, staying healthy, playing the piano (a recent passion), meditating.’’ And then the Trump/golf stories began flying on TV, stinging Reilly like a hornet in the rear.

‘‘I thought: ‘I can’t let this happen. I care about golf. I’ve played it my whole life. I don’t know for sure what he’s doing to this world, but he’s leaving his big orange blob on this game I love!’ ” Reilly said.

You see, most people don’t cheat at golf. According to the National Golf Foundation, 85 percent of even casual golfers don’t cheat. Reilly has played with a lot of celebrities and dignitaries — including Trump himself — and he says this: ‘‘The Bushes don’t cheat. You could have put Obama’s golf on a PGA poster — no cheating, no mulligans, no do-overs.’’

From the book: ‘‘To say ‘Donald Trump cheats’ is like saying ‘Michael Phelps swims.’ He cheats at the highest level. He cheats when people are watching, and he cheats when they aren’t. He cheats whether you like it or not.’’

And Reilly hates it.

‘‘You don’t cheat at golf because it’s too easy to cheat,’’ he said to me, starting to get riled up. ‘‘It’s a litmus test to the soul. It’s not like basketball, where you can call fouls.’’

In the book, Reilly says this: ‘‘One of the things I love most about golf is that you’re your own referee. Integrity is built into the fabric of the game. Honesty is more precious than the little white dimples.’’

‘‘You’d rather chew your arm off than be called a cheater!’’ he hollered.

His cheating and lying — about his handicap, his height (6-1, not 6-3), his course revenue, his biggest man-made lake in the world (not even in the top 10 in the United States), etc. — are but interwoven traits of the same con-man persona, a pitchman who will say anything if it suits his whim.

To base an analysis of grievously flawed character on the way Trump plays golf, builds his many courses, lies about his scores, his triumphs, his purported 18 club championships (Reilly’s research shows Trump might have won two, if any) isn’t a reach.

Reilly recounted a tale Arnold Palmer told him about how he never would do a business deal with a person until he had played golf with him: ‘‘In four hours of golf, you can’t hide who you are.’’

And don’t forget, this president of ours plays lots of golf. He ripped Obama for playing while in office, but Trump plays more than anyone ever.

‘‘I just want to stay in the White House and work my ass off, make great deals, right? Who’s gonna leave?’’ he told a crowd while campaigning in 2016.

Yet he’s always jetting off, Secret Service and military armaments in tow, to one of his properties to play. If he gets re-elected, he’s on pace to play 759 rounds in eight years.

It’s all hilarious in Reilly’s gifted hands, but there is a very dark side to the exposé. What about all those Trump property dealings (or deals that were stiffed) in Puerto Rico, Saudi Arabia, Indonesia, Cuba, even China? How much do they drive and affect policy from a man whose only instinct is for self-aggrandizement?

‘‘If you thought Trump wouldn’t dare use the office of the president to get what he wants for his golf courses, you don’t know Trump,’’ he writes.