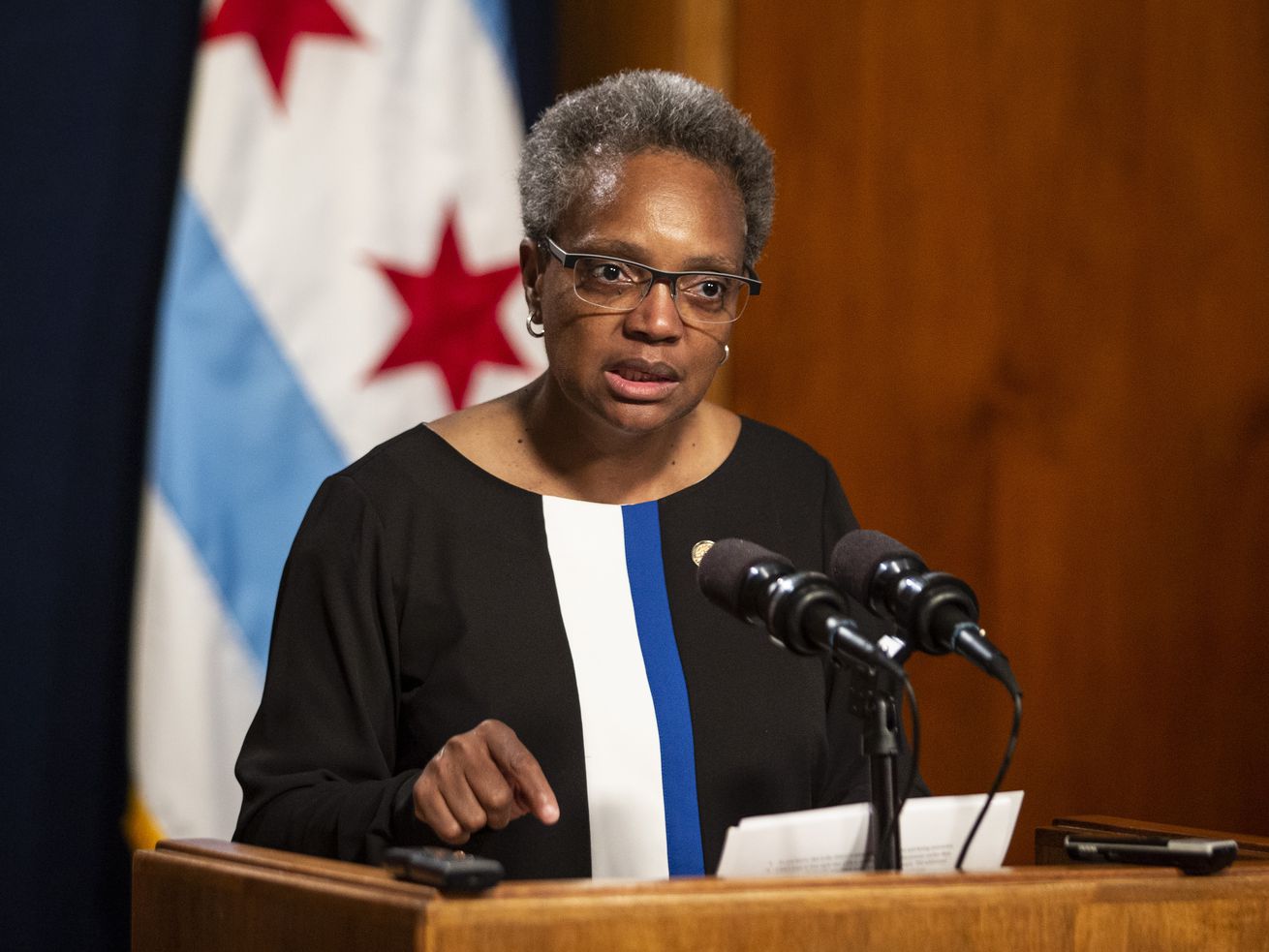 As a former federal prosecutor, Mayor Lori Lightfoot knows better than anyone that the law requires aldermen to forfeit their offices only upon conviction. But she claims Burke’s own words show he has forfeited his “moral authority” to serve residents of the 14th Ward.

Mayor Lori Lightfoot on Friday turned up the heat on Ald. Edward Burke (14th) to resign the City Council seat he won just three months ago after Chicago’s longest-serving alderman was charged under a racketeering law normally reserved for mobsters.

As a former federal prosecutor, Lightfoot knows better than anyone that the law requires aldermen to forfeit their offices only upon conviction.

Burke has not been convicted. In fact, his attorneys called the 14-count indictment “unfounded and not based on factual evidence.” They say they’re confident he “will be vindicated.”

But Lightfoot’s former colleagues in the U.S. Attorney’s office have dealt her a strong hand in her quest to triumph over her longtime political nemesis and end the unwritten rule that has given aldermen virtually unbridled control over zoning, permitting and licensing in their wards.

And Lightfoot is hell-bent on playing that winning hand to get the City Council reform that fed up Chicago voters gave her a 74 percent mandate to deliver.

“The indictment alleges [a] yearslong course of conduct in which he is repeatedly in different circumstances unconnected from each other trying to pressure third parties to hire his law firm in return for providing government access and services. It is wide-ranging. I’ve not seen anything like that with respect to Chicago aldermen.”

Lightfoot was part of a team of federal prosecutors that helped convict former Ald. Virgil Jones (15th). Jones was one of six aldermen who went to prison in the corruption probe known as “Operation Silver Shovel,” which starred bribe-paying FBI mole John Christopher.

“Looking back at the variety of those cases, there was nothing like what’s been alleged . . . in this superseding indictment. It is just a degree different and more serious and more wide-ranging and more problematic for us as a government. We have to reckon with this. This is what people voted for,” she said.

“People are appalled by the way in which Ald. Burke and others have conducted themselves. And we have got to set the standard. Which is why I believe it’s important for Ald. Burke to resign.”

“He won’t resign” no matter how many times Lightfoot demands it, Waguespack said Friday.

Still, Waguespack said it was “appropriate for the mayor to demand it.”

“This isn’t just about the 14th Ward. It’s about the whole city and how the whole system operates,” he said.

“If you have a substantive reason to hold something up, that’s good. But aldermanic prerogative where you just say nothing or no is stunting development and growth of our city. So, it is a citywide issue.”

On Jan. 3, Burke was charged with attempted extortion for allegedly shaking down a Burger King franchise owner for legal business and for a $10,000 campaign contribution to Toni Preckwinkle.

The charge catapulted Lightfoot into the mayor’s office.

Among them, allegations that Burke tried to extort legal business from developers of the Old Main Post Office in exchange for his help with a variety of matters, including an $18 million tax increment finance subsidy, a $100 million tax break and help resolving issues with Amtrak and the city’s Department of Water Management.

In those recordings, an irritated Burke was caught on tape asking Solis, “Did we land the, uh, tuna?” and complaining that the “cash register has not rung yet” and, until he scored the legal business, he was not “motivated” to help 601W Cos. with its issues at the Post Office. “As far as I’m concerned, they can go f—- themselves,” Burke said.

Lightfoot said Friday she has asked Corporation Counsel Mark Flessner to investigate current and former city employees whom Burke is accused of pressuring to get what he wanted for 601 W Cos.

In the meantime, Water Management Commissioner Randy Conner and Buildings Commissioner Judy Frydland will be allowed to remain in their jobs.

Shortly after taking office, Lightfoot issued an executive order stripping aldermen of their sweeping authority over zoning and permitting in their wards. She has promised to do the same with their control over zoning, but it can’t be done by executive order. She needs a City Council vote to do it.

Earlier this week, Lightfoot openly relished the chance to humiliate Burke in an early skirmish on the City Council floor.

On Friday, she wasn’t gloating at all when asked whether the unprecedented indictment against Burke would strengthen her hand against a recalcitrant City Council.

“This is a sad day. It really is. To have somebody who has served for as long as Ald. Burke has. The allegations in the . . . superseding indictment are great and serious. This isn’t a day when I’m thinking about how this has helped me politically. I’m thinking about what we need to do to restore trust to the public. That’s what’s on my mind,” she said.

Lightfoot noted that what she called the “Chicago Way” was a “deep cultural phenomenon” that will “not be easy” to change.

“I hope that by what we do and the way in which we conduct ourselves in government, we will be freeing up the business people. We will be freeing up our employees to recognize that they can do their jobs with integrity . . . without having to give more to get access to basic city services That’s the message that I hope will be taken from the work we’re trying to accomplish. . . . We’ve got to restore integrity and legitimacy,” she said.