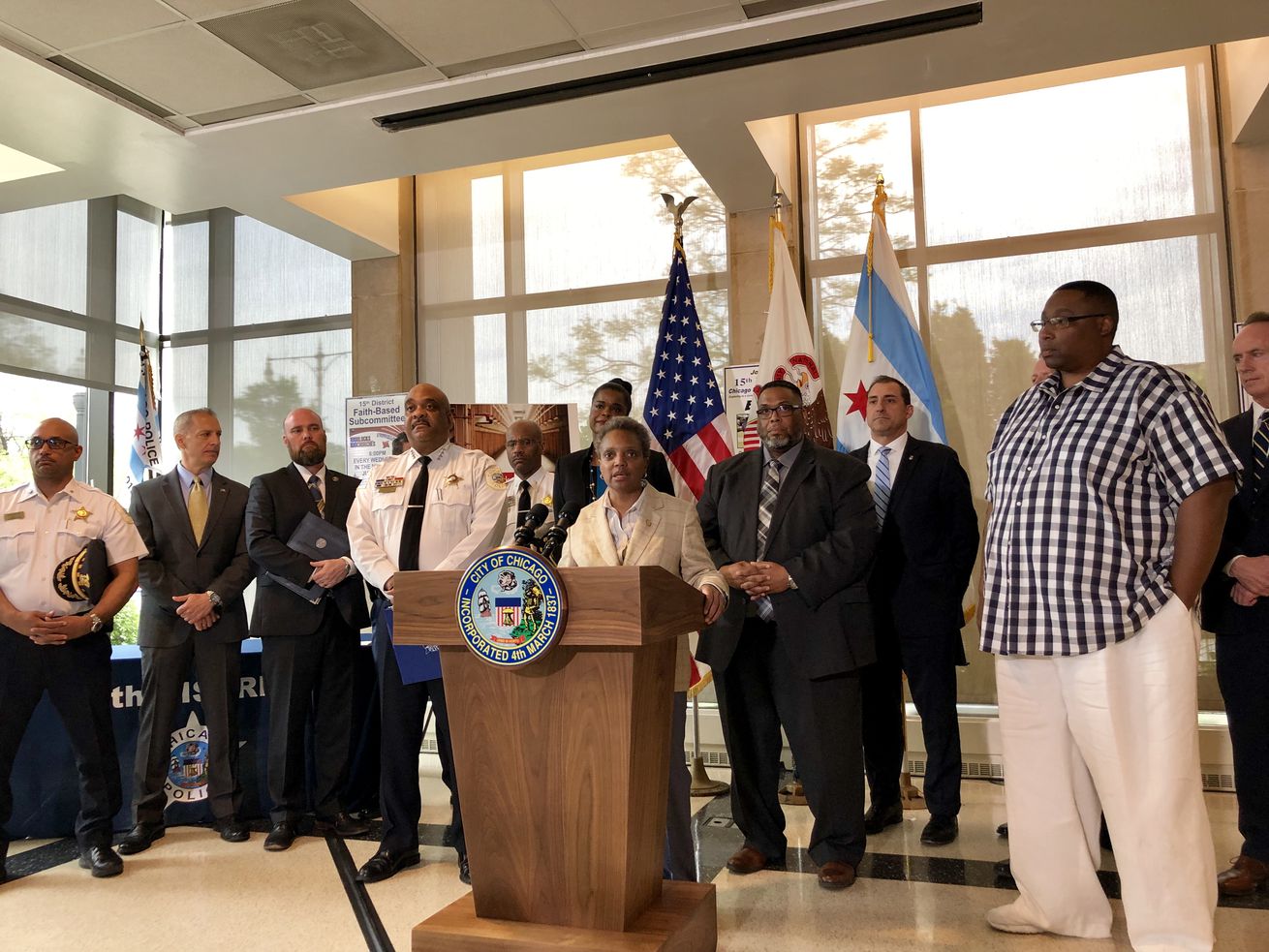 But even with an extra 1,200 Chicago police officers on the street this weekend, Mayor Lori Lightfoot said “This is not an issue that can solely lie on the shoulders of the Chicago Police Department.”

In what has become a bi-annual tradition, leaders from local, state and federal law enforcement and other government agencies gathered Friday afternoon to stress the cooperation and collaboration between their fiefdoms ahead of the historically violent Memorial Day weekend.

And though an extra 1,200 Chicago police officers — nearly 10% of the entire department’s payroll — will be dispatched to help maintain safety and stanch the bloodshed over the weekend, Mayor Lori Lightfoot said, “This is not an issue that can solely lie on the shoulders of the Chicago Police Department.”

“We as a community — each of us, every home, every block, every neighborhood — we have to also take ownership of our own safety,” Lightfoot continued. “We can not provide sanctuary to those who are picking up guns and terrorizing our communities. We can’t accept that as the norm.”

Canceling requested time off for a sizable portion of the CPD has become a common practice ahead of the Memorial Day and Fourth of July holiday weekends — two weekends that have come to symbolize the annual uptick in Chicago gun violence during the summer months.

“Memorial Day didn’t sneak up on us,” CPD Supt. Eddie Johnson said of the department’s plans.

Several Chicago police officers, though, told the Chicago Sun-Times that the department only informed them in recent days that their requested time off was canceled.

Much of the additional manpower will be deployed based on data collected from the CPD’s 20 Strategic Decision Support Centers, which use analytics to help department leaders determine where violence could occur next.

The CPD’s Organized Crime Division also executed a series of raids in recent days with the aim of getting those who drive violence off the street at least for the holiday weekend.

“We zeroed in on known street gangs and areas associated with narcotics sales this week leading up to Memorial Day,” said Salvador Avila, the CPD’s Chief of the Bureau of Organized Crime. “I’d like to think that Chicago is safer heading into the holiday weekend due to the efforts of our officers.”

Avila said that 67 people were arrested in the citywide raids and most were charged with delivery of a controlled substance. Officers recovered 697 grams of heroin, nearly 2,300 grams of cocaine, more than 4,300 grams of marijuana and nearly $10,000 in cash, along with several guns.

The holiday weekend could prove crucial for Johnson’s future, as Lightfoot has said she plans to keep Johnson on as superintendent at least through the summer, when gun violence peaks in the city. Johnson has said he’d like to remain in the job for at least another two years.

Thursday, Lightfoot announced a plan to expand youth programs for the weekend and employ faith leaders in an effort to maintain peace in the city’s most violent areas.

The weather forecast could work to the CPD’s benefit this weekend, as well. Historically, fewer shootings occur in inclement conditions, as fewer people are outside. Rain is expected for much of the holiday weekend.