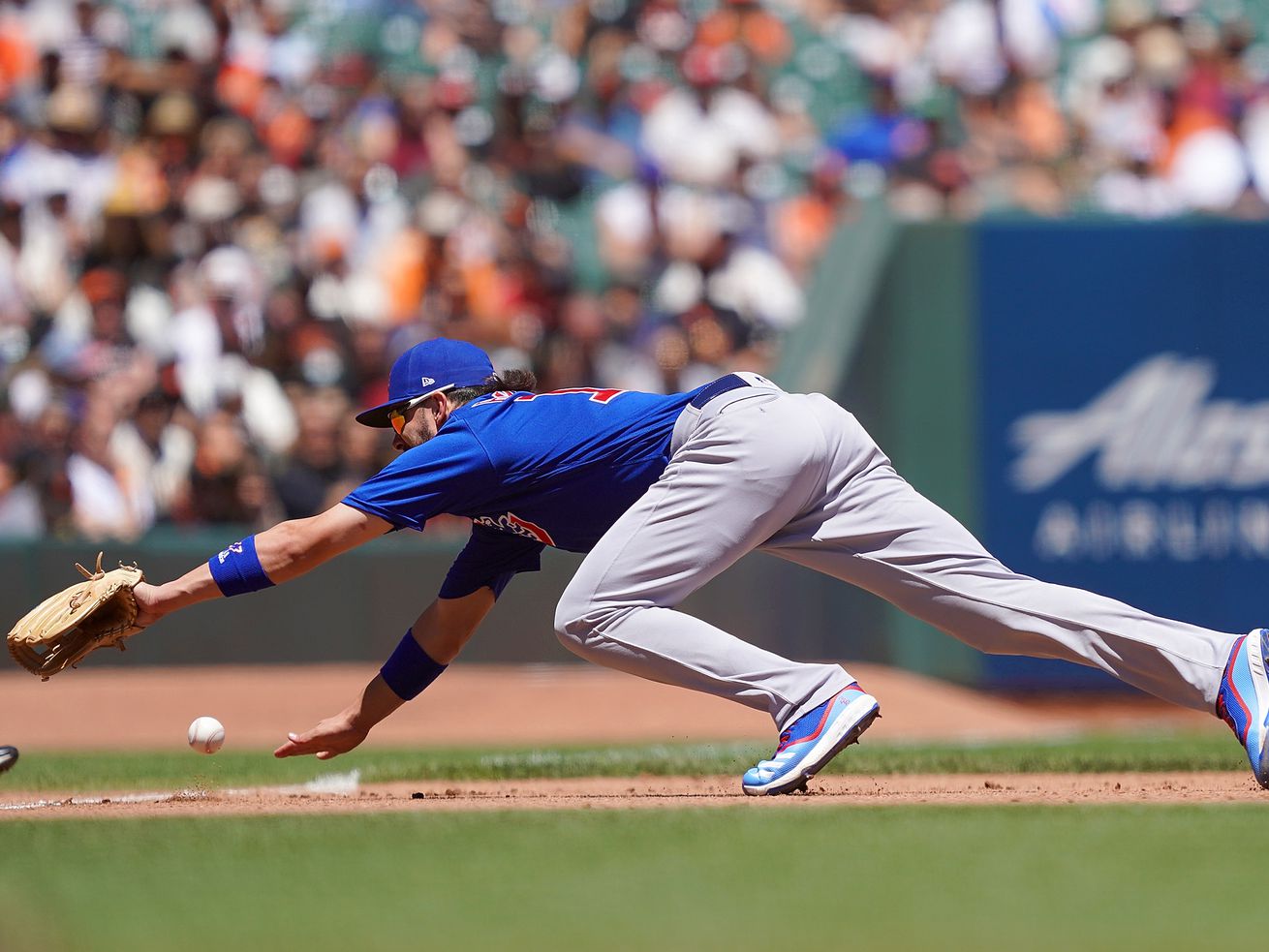 One strays from home and almost instantly loses its bearings, is betrayed by its basic instincts and is rendered a broken, bloodied heap of lifelessness. The other gets hit by a truck.

One strays from home and almost instantly loses its bearings, is betrayed by its basic instincts and is rendered a broken, bloodied heap of lifelessness. The other gets hit by a truck.

Sorry if that’s crass, but let’s be real, folks: The Cubs wasted no time out in San Francisco losing yet another road series, their first of the second half. First, they gagged away Monday’s opener to the Giants, blowing a two-run eighth-inning lead with reliever Pedro Strop on the mound. Next, on Tuesday, their bats predictably powered off over the last five frames of a 13-inning loss.

“I got nothing negative about my group,” manager Joe Maddon said Tuesday after Pablo Sandoval’s walk-off homer off Brad Brach. “We played well. We played hard.”

And where did that leave the Cubs? With — it almost seems too bad to be true — the worst road winning percentage (.383) in the National League.

This is a World Series contender?

I know what some of you dyed-in-the-wool fans are thinking: Even with their terrible road record of 18-29, the Cubs are in first place in the NL Central. Indeed, hope isn’t lost for this team. But three games in Milwaukee follow this series, with three games in St. Louis after that, and the Brewers and Cardinals each are within a whisper of first place.

Warning: Objects in rear-view mirror are closer than they appear. pic.twitter.com/00BKsB3x0N

Or as Sun-Times Cubs beat writer Gordon Wittenmyer so deftly put it Wednesday in his tweet of the division standings: “Objects in rearview mirror are closer than they appear.”

Every team in the Central has its warts. The Cubs have theirs, and the biggest, gnarliest one is this: They’re awful anywhere not named Wrigley Field. At home, they’re lions, sporting a record — 36-18 — that screams “elite.” But they pack their bags and instantly morph into deer in the headlights.

Blame the pitching if you want. The Cubs entered Wednesday’s series finale at Oracle Park with a road ERA of 4.94, more than a run and a half higher than their ERA at home.

Or blame the absence of clutch play. Ten of the team’s 29 road losses have come by a single stinking run.

“I don’t know how to explain it,” Kris Bryant said. “Sometimes, it goes your way. Sometimes, it doesn’t. It doesn’t seem to be going our way this year in terms of one-run games.”

But the Cubs’ 5-16 record over their last 21 road games is easy to explain. Two words, in fact, cover the whole fetid mess:

Well, that was interesting.

The Addison Russell experience, that is.

He was a trade steal.

He was an All-Star.

He was a World Series grand-slam hero.

He was a better shortstop than Javy Baez. OK, forget that part.

Russell is a minor-leaguer now, sent down by the Cubs to Class AAA Iowa. Chances are, he’ll never return to Wrigley in home pinstripes.

Show of hands: Who has a problem with that?

Guess that’s that, then.

• Question: If a last-place team has its victories vacated and no one is around to hear it, does it make a sound?

Here’s all you really need to know about the punishments of DePaul’s men’s basketball program that were handed down this week by the NCAA’s overly officious, absurdly wonky infractions committee:

One, they won’t adversely affect the “progress” of Dave Leitao’s program. Hey, the man insists there has been lots of it. I’m not here to quibble.

Two, although Leitao will serve a three-game NCAA suspension at the start of next season, the school made it a priority to distance its coach from responsibility for any recruiting violations that were committed. That means more of Leitao. That means more of athletic director Jean Lenti Ponsetto. Could fans (however many of them are left) of the Mom & Pop U. Blue Demons imagine it any other way?

• A note to all the media yuksters who shared hilarious insights last week at Big Ten media days about Illinois football coach Lovie Smith’s beard: Every conceivable joke, comment or observation about it was made when Smith grew the thing in 2018. It’s been done already. Also: It’s just a beard, which is about as remarkable as going 4-8. Stop it.

• The time has arrived for another Bears training camp. Am I the only one who hears “Bourbonnais” and instantly craves a stiff drink with a Miracle Whip chaser?

• The Cubs aren’t the only team that scoffs at projections about how many games they’ll win in 2019. White Sox manager Rick Renteria said this before the team returned from its most recent road trip:

“Every industry has a tendency to project where everybody’s going to be and how they’re going to end, and everyone wants to make sure that they hit their mark. We’re here to break the bank.”

Not quite a Knute Rockne moment, but I dig it.