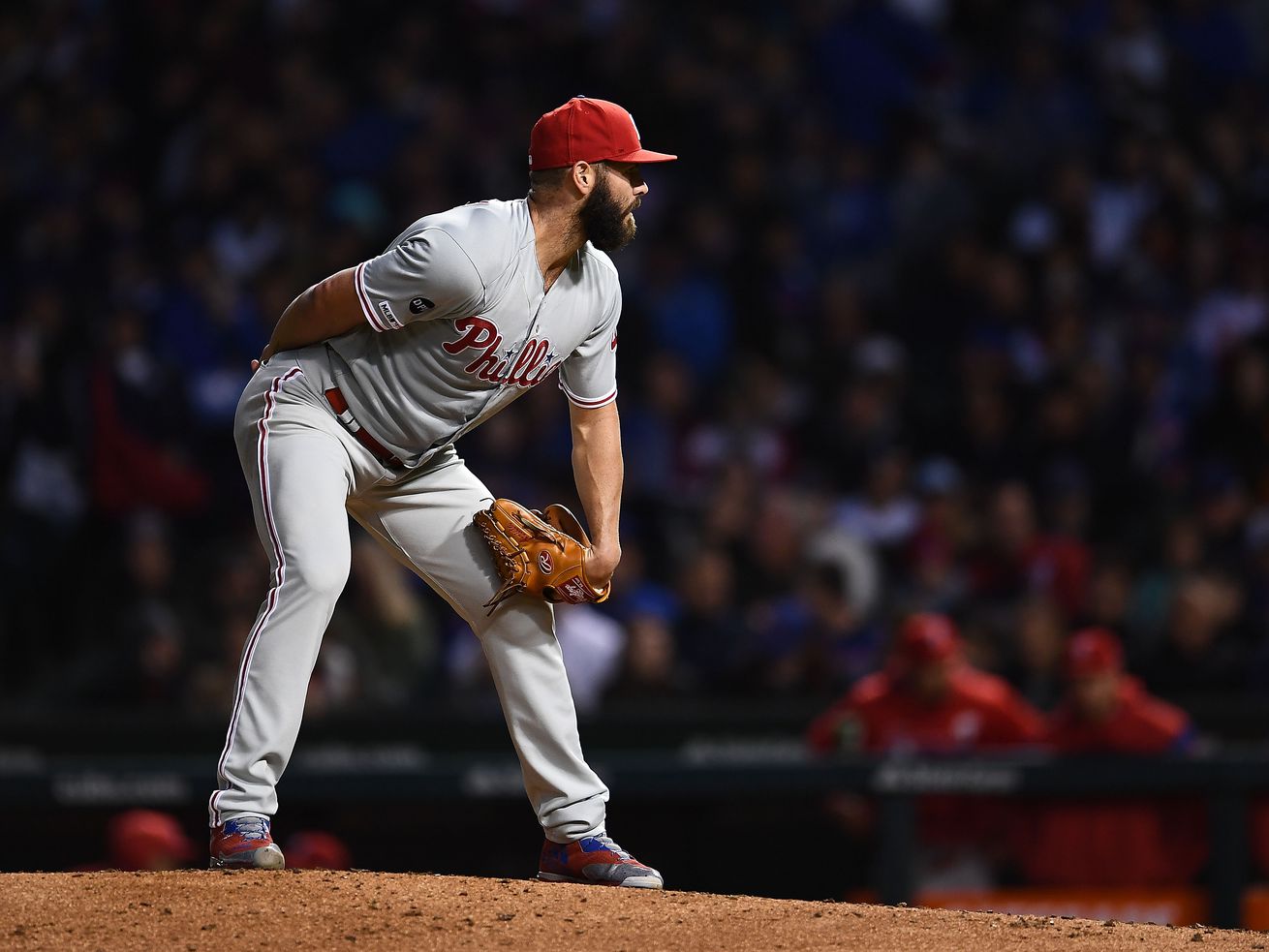 It wasn’t vintage Arrieta, but that old, familiar toughness was there. The only run he allowed in six innings came on an Anthony Rizzo base hit in the third.

Jake Arrieta was in no rush to enter the batter’s box Monday night, and who could blame him? He was having his long-awaited moment with the denizens of Wrigley Field. A final moment before “one of us” could become, more clearly and permanently, “one of them.”

Cubs fans rose to their feet and cheered loudly as the Phillies pitcher strode toward home plate in the third inning of a series opener between the division leaders. Stopping short of the box, Arrieta took a trip around Wrigley with his eyes, acknowledging fans in each part of the park, before doffing his red batting helmet with a flourish.

On the mound taking it in stood Yu Darvish, the big-ticket free agent who essentially replaced Arrieta after the 2017 season. Maybe someday, Darvish will be on the receiving end of such warmth from the folks at Wrigley. Maybe not.

There are those who wonder why Arrieta, 33, no longer pitches for the Cubs. Why the team decided a pitcher with a 30-14 record and a 2.31 ERA entering Monday’s start at Wrigley no longer fit their plans. Why a Cy Young winner, a World Series champion and the author of the Cubs’ last two no-hitters wasn’t worth believing in.

But there is no question whatsoever about what Arrieta meant to the Cubs as they rose to the mountaintop. He was their engine in 2015, driving them past the Pirates in a wild-card game and all the way to the NLCS. He was an All-Star and won both his World Series starts in 2016. He was good again in 2017 as the Cubs returned to the NLCS and — in his final outing with the team — beat the Dodgers to stave off elimination.

“He accomplished really incredible things here in Chicago — a World Series ring, a Cy Young award, the most dependable starter they had for the better part of two years — and I think this city adores him for that,” Phillies manager Gabe Kapler said. “And I think he wants to perform for the Philadelphia Phillies, but also to show everybody that he is still capable of greatness.”

Did Kapler believe Arrieta hoped to stick it to the Cubs, the 30th and final major-league team for him to face in his career?

“Anything is possible,” the manager said.

It wasn’t vintage Arrieta the Cubs would see, but that old, familiar toughness on the mound was there as he escaped bases-loaded jams with no damage in the second and fifth innings. The only run Arrieta allowed over six innings came on an Anthony Rizzo base hit in the third. Something about that — two respected veterans doing business together — seemed almost perfect.

If Arrieta — who signed a three-year, $75 million contract with the Phillies — pens a second World Series chapter in his career, he could be viewed in Philadelphia much as Jon Lester is viewed here. When the Cubs signed Lester after the 2014 season, it signaled the end of tanking with the arrival of an established star pitcher and world champion. Arrieta was that same sort of figure for the Phillies, whose own rebuilding period ended as soon as he signed on the dotted line.

Arrieta was a relatively modest 10-11 in his debut with the Phillies — not at all unlike Lester’s 11-12 maiden voyage with the Cubs in 2015.

And just as Lester never was considered a pure talent on a par with Arrieta while they were together in Chicago, it’s entering-his-prime Aaron Nola whose physical gifts are second to none in Philly.

Ask any Cubs pitcher who leads the staff, and he’ll say Lester. Ask the Phillies the same question, and they’ll say it’s the guy who called out superstar right fielder Bryce Harper early this season for getting himself ejected from a game.

But the cheers for Arrieta — the loud, emotional ones — will have to come in Philly from now on. He’s one of theirs, one of them.