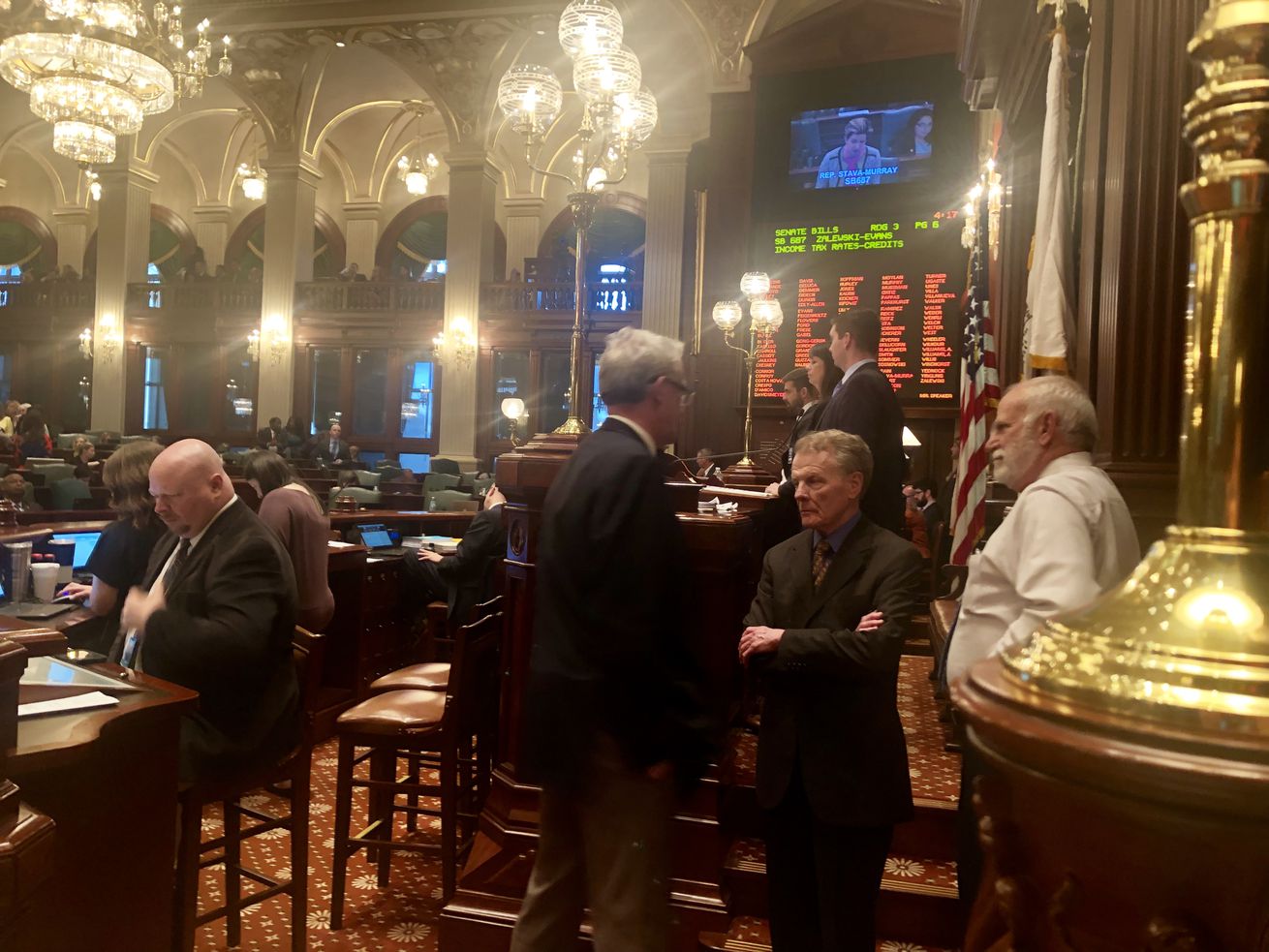 After just 10 minutes of debate, the Illinois House cleared the comprehensive budget plan 83-35. But before anyone could do any victory laps, Mayor Lori Lightfoot threatened to fold her hand on the already shaky gambling deal.

Legislators unveiled a whopping $40.6 billion spending plan on Friday — alongside the details of a capital proposal funded in part by expanded gambling.

But even as the House signed off on the budget late Friday, Mayor Lori Lightfoot threatened to fold her hand on the already shaky gambling deal — objecting to a provision to allow sports betting at sports venues such as Soldier Field.

The budget came in an avalanche of information — thousands of pages — and legislative leaders were closeted behind closed doors with Gov. J.B. Pritzker during several meetings on Friday to try to square away differences.

And after just 10 minutes of debate, the Illinois House cleared the comprehensive budget plan 83-35. That came after hours of negotiations and House Speaker Mike Madigan telling lawmakers they’d be in session “at least through Sunday.”

By about 9:45 p.m., Madigan called it a “bipartisan budget bill in coordination with [Ilinois House Republican] Leader [Jim] Durkin.”

“The work of this House is not done. We have adjourned for tonight and will return tomorrow to continue working in a bipartisan manner to finish the remaining work of the General Assembly,” the speaker said in a statement.

During the short debate, Durkin called the budget plan “a start of us closing up this year working on a budget that’s balanced that doesn’t do harm to Illinoisans and to our businesses and to to the taxpayers of Illinois.”

The Illinois Senate also hoped to take up some of the budget measures as well.

But things could get tricky if legislators have to vote on the budget and capital plan Saturday or Sunday: They’ll need a supermajority to clear the measures. That arithmetic is no problem for the Democrats, but the politics could be.

The House appropriations measure includes $375 million for elementary and secondary education through the evidence-based school formula, which House Majority Leader Greg Harris, D-Chicago, said is about $25 million more than was requested by the governor. The budget also includes $450 million for MAP grants.

About $1.4 billion of the spending plan would go to help pay for the state’s backlog of bills. Of that amount, $1.2 billion would paid through a bond issuance.

And during a House Executive Committee, lawmakers cleared a gambling proposal that would add six casinos in Chicago, Waukegan, the south suburbs, Williamson County in southern Illinois, Rockford in northern Illinois and Danville in the state’s east-central region.

But Lightfoot issued a statement saying that while she wants a Chicago casino, she doesn’t support sports wagering at place like Soldier Field.

”I strongly support a gaming bill that directs a new casino and dollars to the city of Chicago. However, I oppose the inclusion of a provision that would open up sports wagering in venues like Soldier Field,” Lightfoot said. “Such a proposal has the potential to undermine the viability of any Chicago-based casino through the diversion of customers and revenue from a casino. Because the impact of sports wagering in stadiums has not been fully vetted or analyzed, I cannot support the bill in its current form and urge the deletion of this stadium-betting provision.”

Video gambling machines would OKed for larger truck stops. The Illinois Gaming Board would have oversight of regulating the Chicago casino, which would be privately run with revenue evenly split between the operator, the city and the state.

The bill also includes a changed version of a “penalty box” for fantasy sports sites DraftKings and FanDuel. Casinos, sports venues and tracks would be able to offer sports betting as soon as they’re licensed. But for the first 18 months, they can offer online betting but deposits have to be made at the facilities.

After 18 months, three online licenses would be opened up and sports betting would be offered at licensed gaming facilities and online. The fantasy players can get in at the beginning but only in partnership with another licensee, such as a casino sports book sponsored by one of the fantasy sports sites.

The House budget bill also includes a provision sought by the developer of the proposed One Central project near Soldier Field. It would allow the state to enter a partnership with the developer to build a $3.8 billion transit hub to serve the commercial and residential project, which could see a cluster of high-rises built over Metra tracks.

The state eventually would pay the developer for part of the cost once the hub starts generating tax revenue. The legislation said the state will pay nothing before fiscal 2024 or before the hub is finished. It allows the partnership to seek a federal loan. One federal program could provide up to $1 billion in backing.

“It does not obligate us to do anything and it comes to us with no cost,” Harris said. “The full risk is on the developer.”