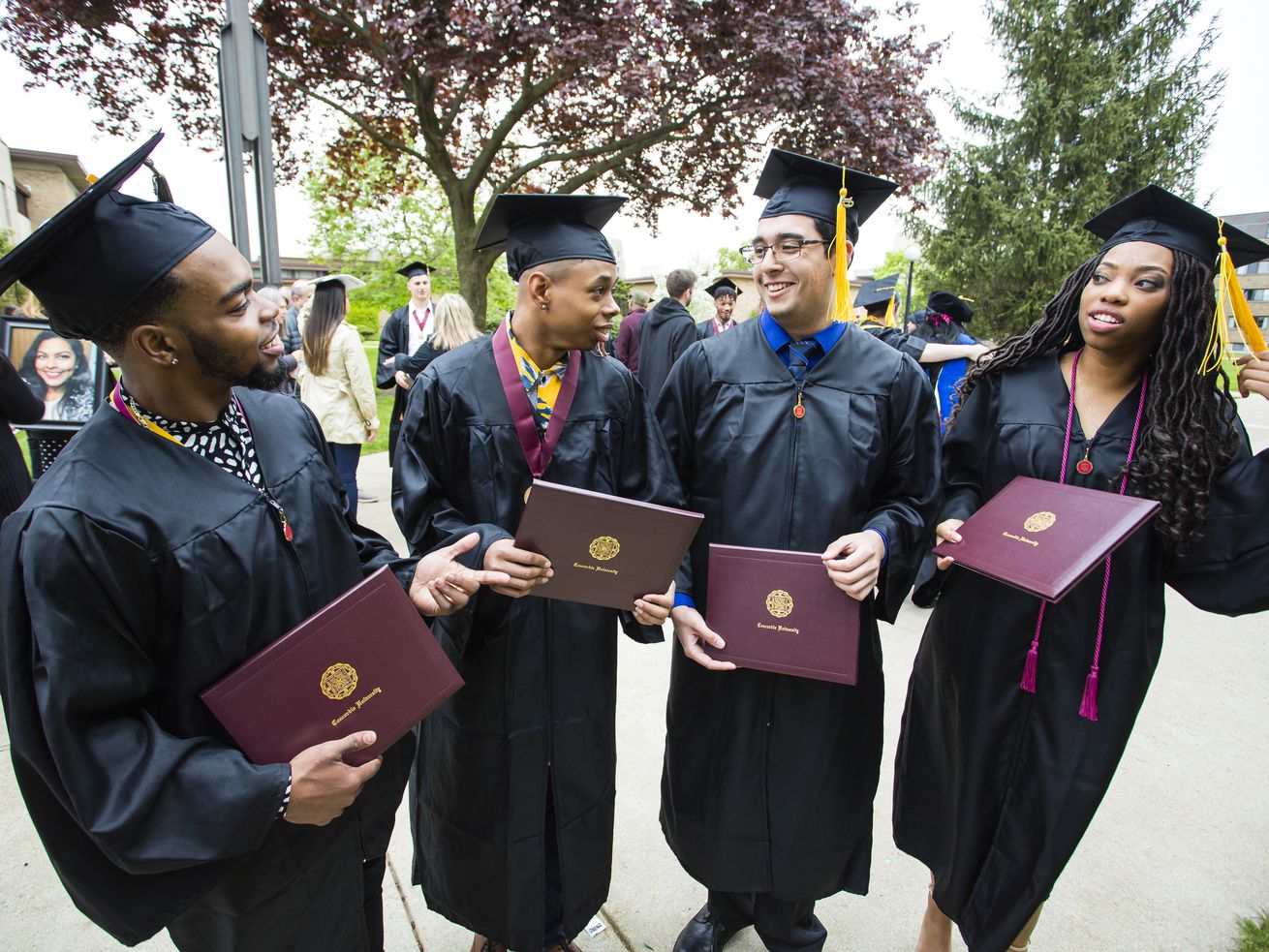 In 2008 Fifth Third Bank and Concordia University made a potentially life-changing pledge to a group of students at Roosevelt Middle School in Bellwood.

In the fall of 2008, a bank made a simple but significant promise to about two dozen middle-school students in west suburban Bellwood: Do well in school, stay out of trouble and receive a free ride to Concordia University.

The commitment by Fifth Third Bank — worth about $160,000 per student — was a potential windfall to the families of the 12-year-olds from a low-income community of color. Besides free tuition at Concordia, in River Forest, the “Tomorrow’s Promise” program paid for books, room and board, a laptop, tutoring and free summer-school courses. They also were provided with paid summer jobs in the years leading up to college.

Like the recent pledge by billionaire Robert Smith to pay off the student loans of Atlanta’s Morehouse College graduates, the Roosevelt Middle School students seemingly won the lottery in a system that otherwise can require participants to take on mountains of debt to get ahead.

A decade later, four of 22 students have completed the program: Thaddous Daniel, Janay Taylor, Javier Terrazas and Gideon Coble. Another three are on track to graduate soon, while at least one more got a degree from a different school.

“Fifth Third gave me an opportunity of a lifetime,” said Daniel, who was recently awarded a degree in exercise science and plans to study nursing.

But the results also show the challenges faced by students even when the cost of college no longer is a barrier.

About two-thirds of the students didn’t complete the program. Three dropped out in the very first year of the pledge. Several others graduated from high school and enrolled in college — but didn’t get a degree. One student died. The bank lost track of many of the students.

“When your end goal is college persistence and some students don’t achieve it, there is a bit of a loss, but it doesn’t mean they didn’t go on to do other things,” said Nicole Johnson-Scales, a Fifth Third vice president and head of community development who helped oversee the program. “In the end, kids have to make a choice that is best for them.”

Some of the students enrolled elsewhere in programs Concordia didn’t offer; others just dropped out for a variety of reasons.

“No one’s path to college is a linear shot to their degree. It certainly wasn’t for me, and those kinds of detours build character,” Johnson-Scales said.

When the program was announced in November 2008, Thomas Jandris, dean of Concordia’s College of Innovation and Professional Programs, told the Chicago Sun-Times the goal was to “create a lighthouse effect, where the interventions will ripple out across the district and hopefully the nation.”

At the time, Illinois’ overall high school dropout rate was 11.5%, the highest in the nation, according to the National Center for Education Statistics.

Evelyn Burdick, Concordia’s senior vice president for enrollment and marketing, said Roosevelt Middle School was chosen because the bank and university were committed to helping students from disadvantaged backgrounds. The middle school is 52.5% Hispanic and 45.8% African American; 99.2% of its students coming from low-income households, according to the Illinois State Board of Education.

“This was a pretty unique experience to have a financial institution, a private university and a public school district come together to provide access to higher education for these kids,” Burdick said. “Many of these students might not have otherwise had access to college and will be the first in their family to get a college degree.”

That was the case with many of the students present when the program was announced. The program required students to maintain a B-average and graduate from one of three high schools in Proviso Township.

“It’s like a very big offer that can happen once in a lifetime,’’ 13-year-old Joel Alvarado said at the time. “It’s very hard to get a scholarship. I want to use it up.’’

Terrazas recalls being a sixth-grader and not believing what he was hearing. “It was surreal,” he says now.

Daniel didn’t understand the significance — while he was already a high-performing student, college seemed like an eternity away.

“Sixth grade me was not thinking about college at all,” he says now.

The next year, test scores among students in the group had increased across the board, and some students became laser-focused on maintaining their grades to take advantage of the program.

Jocelynn Morales, then 13, said a poor grade in a social studies class triggered a deep conversation with her parents, who were concerned about her keeping up with the program’s goals.

“They want me to do better. We had a long, long talk,” Morales said at the time.

By the end of the first year, three of the 22 original students in the program were out — one student moved after a divorce; an illness in the family led another student to transfer; the third just didn’t keep his grades up.

School leadership was unstable, as well; Roosevelt’s principal and the program administrator were fired in that first year.

By the time kids got to high school, even more fell out.

Israel Hatchet said the program helped students bond and work toward a common goal in middle school. But he ended up attending Proviso West; while others went to Proviso Math and Science Academy or Proviso East, he got off track.

“When I went to high school I met all these new people and I kind of just forgot about the program,” Hatchet, now 22, told the Sun-Times. “All of us were a tight-knit group in middle school, which helped me stay focused. But then I went to a different high school than the others and kind of fell out.”

Hatchet now works at O’Hare International Airport and his main focus is supporting his 1-year-old daughter. He still hopes to get a college degree in the future.

‘It’s been a challenge’

Daniel said seeing the others not keep up added stress, as did the regular stresses of life, such as the death of his grandmother in his senior year of high school.

“It’s been a challenge, you know?” Daniel said. “Some people have been through different things, went to different schools … just seeing my friends not complete the program was tough, but everything I endured was just more motivation for me to push through.”

The burden of also knowing this program was his only real shot at college weighed heavily because he knew his family likely couldn’t have sent him otherwise.

“Without this program we would’ve still tried to put our son through college, but it would’ve been so much harder,” Daniel’s mother, Nicole, says now. “My husband and I would’ve probably had to get second jobs, and Thaddous also would’ve been forced to work instead of just focusing on school.”

Twelve of the original students enrolled at Concordia in 2015 after graduating from high school.

Four ended up taking part in Concordia’s graduation ceremony earlier this month; the “Tomorrow’s Promise” students received special recognition by the school — and cheers from the audience.

In addition to Daniel, those honored included Taylor, who majored in biology with plans to attend medical school, and Coble, who earned a business degree and has dreams of opening a chain of barbershops throughout the western suburbs.

Terrazas hopes his degree in mathematics can secure him a job this summer.

“I feel like they are my own children because of how much time we’ve spent together,” Johnson-Scales said. “It’s a gift for us to invest in these students, and to see it all culminate … was amazing.” The bank ended up investing about $1.57 million in the program.

Brianna Earskine decided to attend the University of Illinois at Chicago, where she also recently graduated with a degree in biochemistry. But passing on Concordia didn’t mean a huge financial hit; she got a full-ride scholarship to UIC.

She also overcame odds — both her father and grandmother died in the past two years and she was diagnosed with thyroid cancer — and credits the program with helping her get as far as she has even though she opted not to attend Concordia.

“I knew I had to do whatever needed to be done to stay in the program, and it helped me stay focused on my work,” she said.

Whether the program increased students’ chances of making it through college is harder to measure.

Like most districts, Bellwood School District 88 doesn’t keep data on how many of its middle school students go on to earn a bachelor’s degree.

Nationally, there also isn’t a lot of data on how many ninth graders end up with degrees, but a report from the University of Chicago released in October found only 19% of Chicago Public School ninth graders earned a bachelor’s degree within six years of graduating high school.

How many of Proviso’s graduating students go on to receive a college degree in four years isn’t tracked, but in 2018, 64.3% of the school’s 12th graders went on to enroll in a post-secondary institute within 12 months of graduating, according to the Illinois State Board of Education.

Aerika Brittian Loyd, a professor of education psychology at the University of Illinois at Chicago, said the financial incentives offered by “Tomorrow’s Promise” undoubtedly helped some students, but programs like it just can’t reach everyone.

Brittian Loyd’s research, which centers on the mental health and development of African American and Hispanic youth, said there are many factors why some disadvantaged students struggle to obtain a degree four years after graduating high school. Family concerns are high among them.

“A lot of low-income students of color also have other responsibilities like family obligations,” Brittian Loyd said. “No matter how smart someone is, the need to contribute to their family often outweighs the desire to go to college right away.”

In addition to a lack of resources, low-income African American and Hispanic students can lack a sense of belonging and might not be properly prepared for college. Those issues need to be addressed on a much wider scale, she said.

“This particular program doesn’t address the systemic issues that affect young people that I think needs to be tackled at the state and city level,” Brittian Loyd said. “It’s a great opportunity for our new mayor and governor to think about investing in communities. It can’t just be this one banking institution making this small commitment to this community.”

And then there are other forces that can’t be predicted.

After working through her struggles during the first years of the program, Morales got her diploma and enrolled at Concordia. She was a psychology major on track to be the first in her family to graduate college.

But in December 2017, she was killed when a vehicle she was in was struck by a Union Pacific freight train in Melrose Park. She was 21.

At this month’s commencement ceremony, Concordia presented her parents, Veronica and Luis Morales, with an honorary degree.

Her parents teared up as they stood on stage holding a large frame with a photo of Jocelynn smiling and showing off her trademark dimples.

“She always said she wanted to make me and her dad proud,” Veronica Morales said. “She worked so hard, all her life, and she deserved this, she deserved to be here. … She’s made us proud.”

Manny Ramos is a corps member in Report for America, a not-for-profit journalism program that aims to bolster Sun-Times coverage of Chicago’s South and West sides.