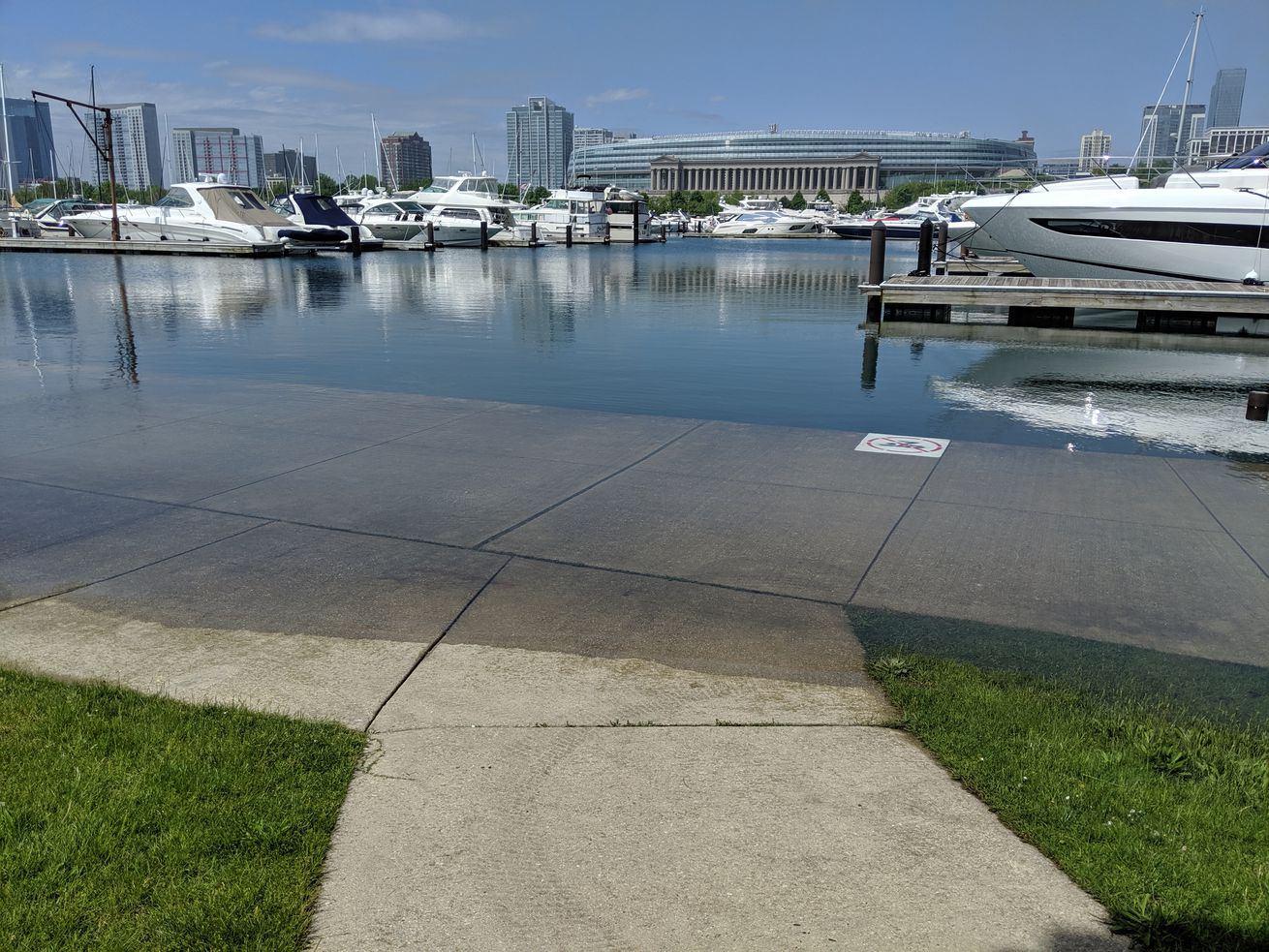 I had thrown high rubber boots in my trunk. I should have worn them.

On Wednesday, I hopped the lakefront to glance at what the extremely high water on Lake Michigan is doing.

There is something just awe-inspiring when water does what water wants.

He said the fishing piers showed some effects at Burnham and Montrose but less at 31st, where the entrance for the pier starts high on the wall. They already had started moving some boats from Diversey Harbor, where clearance under the Lake Shore Drive bridge was down to 10 feet. At 59th Street Harbor and inner Jackson Harbor, it was around 11.

As I walked around Burnham Harbor and Northerly Island, the water ebbed and flowed. When I arrived, the kids with the Chicago Park District’s Fish’N Kids were on a high spot on the sidewalk on the east side of the harbor. A few feet away, the water had risen to flood a section of sidewalk.

Lake Michigan levels reached record lows in 2013, causing navigation issues. Levels have been rising for a couple of years, but they have been spurred this year by the wet spring. Some Great Lakes are expected to reach record levels. Lake Michigan will be very high.

On Tuesday, Chicago Harbors posted: ‘‘Lake Michigan water levels are higher than they have been in decades and are proving to be very challenging for all of us this year. The current water levels are about 8 inches higher than last year and are expected to go even higher in June and July. We recognize that this is going to create some issues, particularly for those harbors with bridges.’’

Those boaters who can’t fit under the bridge at Diversey are asked to fill out transfers. Chicago Harbors will attempt to accommodate those who can’t get into 59th Street or inner Jackson harbor.

Chicago Harbors also asked Belmont A Dock Users, because of ‘‘significant seiching over the past week,’’ to leave some slack in mooring lines so boats don’t hang up during fluctuations. If the rise continues, those boats may be transferred to 31st Street. Temporary walkways will be constructed for the east-side docks at Burnham because of the flooding of promenades at gate entrances.

One lakefront regular asked me if I ever had seen the water this high. I remember the extreme high waters in the 1980s, but they did not seem this high. I also remember a famous — or infamous — Sun-Times cover about the future potential of rising waters on the Loop.

But there is something about the strength of the ebb and flow that forces you to watch.

When I walked past the offices for the Judd Goldman Adaptive Sailing Program, the high-water mark was about 8 feet from their doors, but the water had receded down below the sidewalk. In the few minutes it took me to walk up to check the fishing platforms (seemed to all be high and dry) at the north wall of Burnham, the water again was rising up by Judd Goldman. I stayed to watch it completely cover the sidewalk in three minutes.

Back near the nature center at Northerly Island, the waters had risen again and geese had come down to stand in the water on the sidewalk. I swear it seemed they did so with a defiant attitude.

Harbors, even in ordinary times, have minor seiches throughout the day from wind and current. I think the most interesting place on the Chicago lakefront to watch the ebb and flow of currents and water levels is at the mouth of 59th Street, where, in the space of minutes, the direction of the current can switch from in to out or out to in.

I trekked up to Montrose Harbor, where Stacey Greene at Park Bait told me stories of what the high water is doing.

Down at the flooded portion of the dinghy dock at Montrose, a pair of ducks seemed to adjust to change in structure and stood on the flooded edge.

At the mouth of the harbor, I sat, waited and watched the jetties. I was rewarded when the water began piling up. As I photographed water flooding the jetty, the water suddenly surged up and chased me back.

Final word goes to the Chicago Harbors post Tuesday: ‘‘As you boat along the lakefront this summer, please be mindful of navigation hazards that are present due to the high water levels.’’