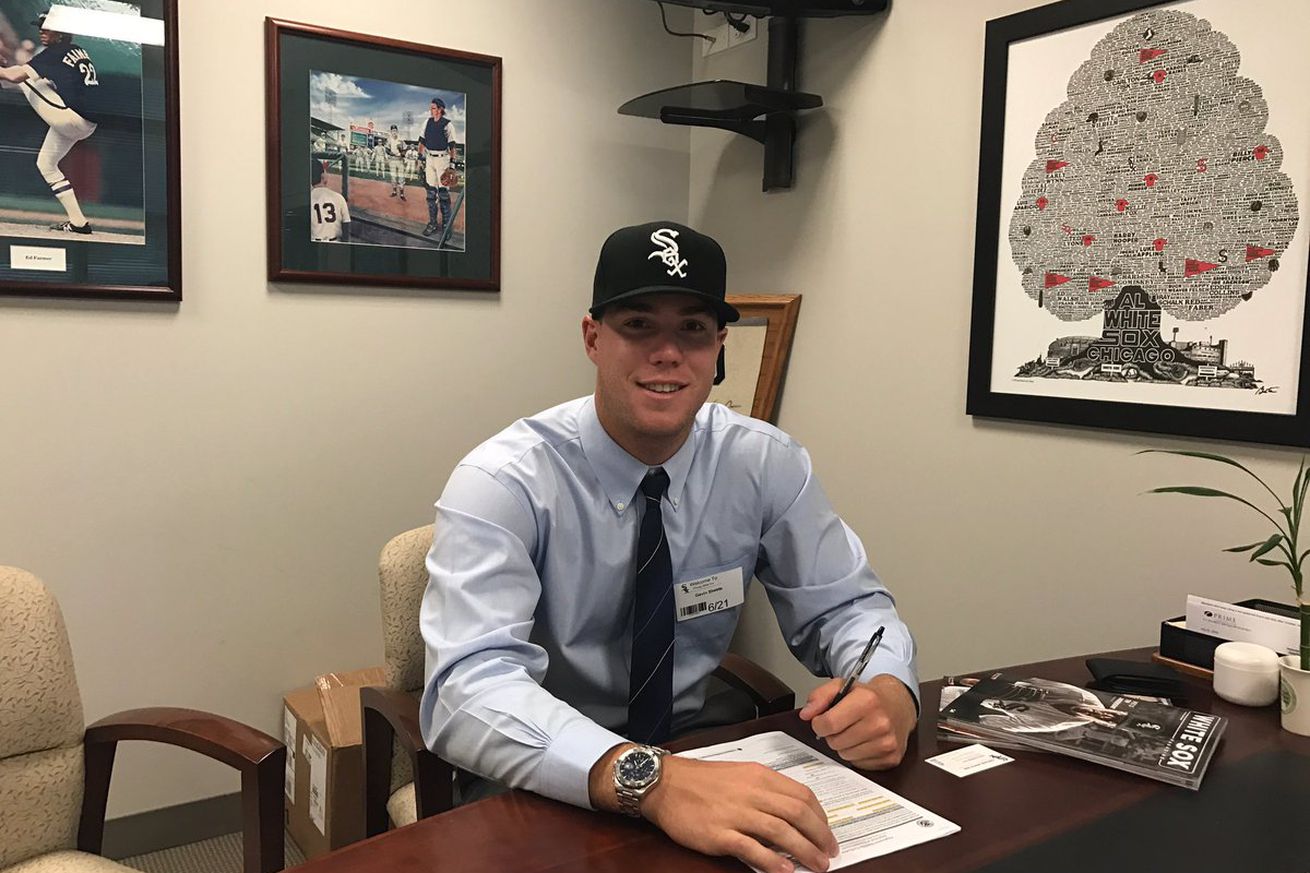 South Side Sox’s No. 11 White Sox prospect sits down with us for a wide-ranging chat — beginning with his amateur playing days, and initial impressions of pro ball

Earlier this week, Birmingham Barons first baseman Gavin Sheets — South Side Sox’s No. 11 White Sox prospect for 2019 — sat for a long interview with us, which we’re running today in two parts.

We kick it off with a brief discussion of Sheets’s baseball lineage, his amateur career, and some initial impressions upon getting his feet wet in the Chicago organization. Later today comes a longer dive into Sheets’s game, and his determination to arrive on the South Side.

South Side Sox: Your dad, Larry, played professional baseball with the Baltimore Orioles, among other teams (totaling eight seasons, 94 career home runs). How was it having your father’s influence pretty early on in developing you as a hitter and a baseball player overall?

Gavin Sheets: Yeah, not many people have the opportunity to have their father play in pro ball and coach you growing up. It was huge for me, because it is a huge advantage to have someone that played pro ball, being able to talk you through the mental side of the game and work with you. Especially now, going into the minor league season: Being prepared for what the lifestyle is like, and stuff off the field, because that is just as important as your swing and how you do things on the field. Having someone that can kinda prepare me for the off-the-field stuff and the mental side of the game has had a huge impact.

Do you have an example of how your father helped you off the field, like how to handle the daily grind?

You know, coming out of college we [only] play 56 games, and you’re playing just three on the weekend and one during the week. Really, it was more how to handle a slump or playing every single night, and being able to mentally, if you’re struggling, get out of it. One thing, my father always told me was he took his at-bats in spurts of 10. So if he was swinging it really well, he would keep his at-bats in counts of 10, and if he was struggling, he would keep at-bats in 10. So, every 10 at-bats is a new streak going. That has been really beneficial. It just keeps you from getting too high or too low.

So you were drafted twice, the first time by the Atlanta Braves in the 37th round [2014 draft]. How did that process go, getting drafted right out of high school?

That was fun. I made it pretty clear that I was going to go to college. It was always a dream of mine to play in the ACC. To get the opportunity to play for my dad in high school, and then to get drafted, was a really cool experience. As a family, we enjoyed that together. But, at the end of the day, I wanted to go to college and have the opportunity to play at Wake Forest in the ACC, and hopefully get drafted again.

And you did get drafted again, by the White Sox, in 2017. How was that whole process, this time actually knowing that you’re probably going to come out of college and go play professional baseball?

It was pretty crazy at the time, because we [Wake Forest] were in the Super Regional playing against Florida, actually, when I got drafted. So, I found out as soon as the game ended; It was kind of mixed feelings, because we just got knocked out of the Super Regionals in Game 3. But, just knowing that I was going to have the opportunity to continue [playing] baseball, playing for the White Sox, it was a dream come true, and it was obviously a no-brainer to go and sign. It was a pretty incredible experience.

How big of a jump is it, really, from playing college baseball, to having a couple weeks off, to then going straight to professional baseball?

It was tough. It is a big jump, especially, after a long college season. You’re worn down a little bit, and [as a pro] you’re heading out to play every single night. More than anything it is the mental side that is the biggest difference. You know, you are still playing the game you love, but you’ve got to find a way to get your body ready to go every night at 7 p.m. If you have a bad game you have to bounce back the next day. Mentally, it’s a big adjustment. Physically, obviously, the talent is better and it’s more consistent, but the biggest thing is just mentally being able to get yourself ready to go every single night.

Kind of to go along with that mental side, you went to Wake Forest, were drafted by the White Sox, had a little cameo in Arizona, and came back to North Carolina again, in Kannapolis. In 2018 you were in North Carolina again, playing in Winston-Salem. This season, you’re in Alabama. How is being away from North Carolina, after playing there almost exclusively for four years, going for you so far?

Yeah, it’s definitely weird, you know, I was lucky enough to go back to Winston-Salem and play there; that was pretty incredible. I don’t think many people have the opportunity to go back and play in their college town [starting out as a pro], and to have the opportunity to do that was a blast. But being in Alabama is a new setting, and it’s kinda nice. It’s nice to get outside of what I’m used to and seeing a new area, meet new people, and play in a new ballpark. So, I’m having fun with it, Birmingham is a great city with a beautiful ballpark, so it’s fun.

You were a second-rounder and a top draft prospect, but how was that first experience of going against up against other top college talent and international prospects? How was it thinking, ‘oh, I’m not in college, now this is actually my job?’

It definitely takes some time getting used to, but the talent, especially in now in AA, you can feel the talent getting very strong. The closer you get to the big leagues, the better players get. You start to play older guys. I think this is the first year where I have played with guys who have big-league time. You start to pick their brains a little bit. It’s fun, because it’s super-competitive. To get to the big leagues, this is what you have to go through to show that you can compete with these guys and just have fun with it.