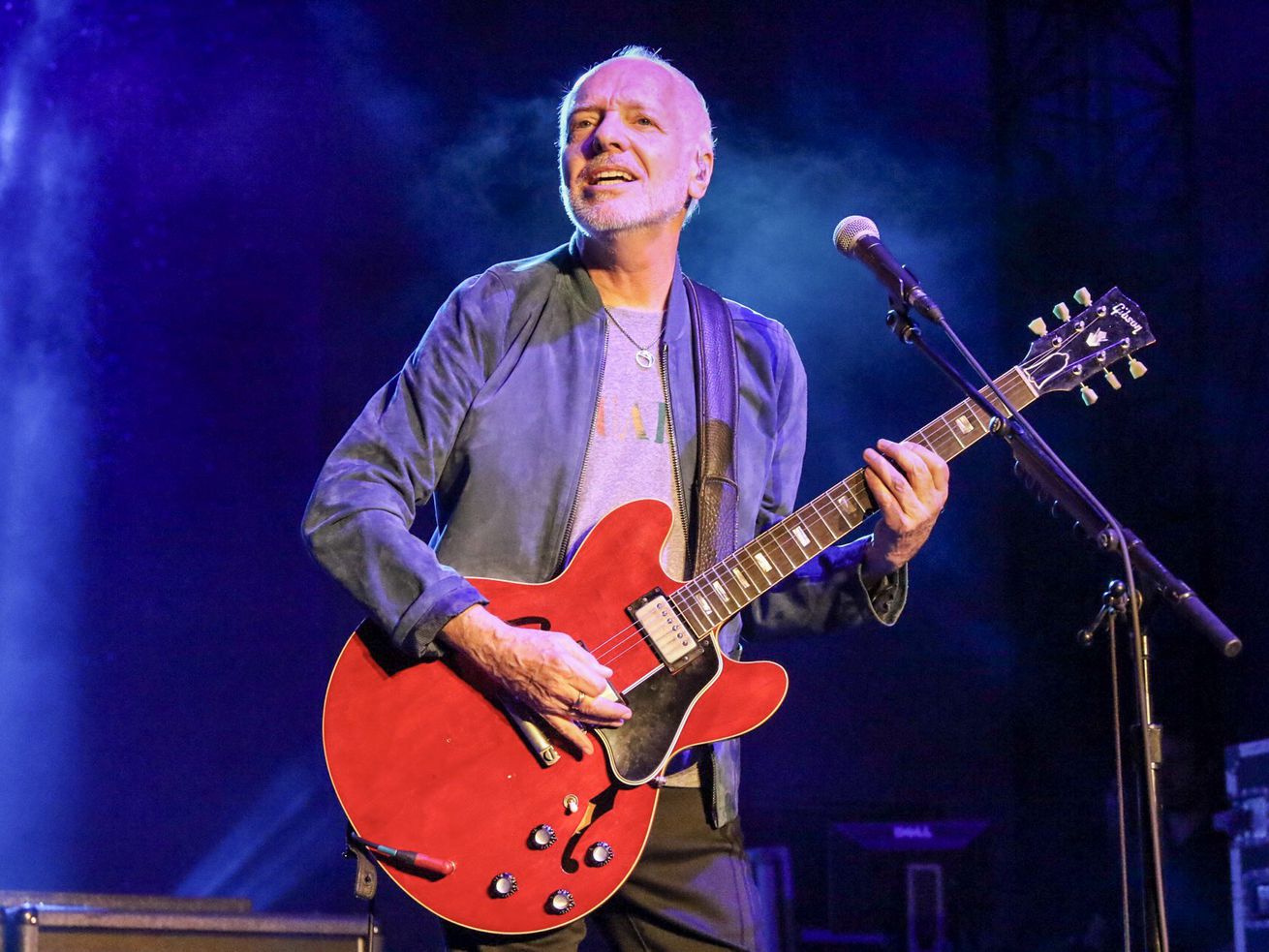 The legendary pop-rocker filled the evening with amiable stories that deepened listeners’ connections to the songs.

Peter Frampton’s musical legacy would be assured by the multi-platinum success of 1976’s “Frampton Comes Alive” alone, not to mention his key role as a teenaged guitarist with English hard-rockers Humble Pie. Although the innovative musician and songwriter was marketed as a pop idol during his mid-70s heyday, his consistent presence and quality of work have long since proven that he was no shallow flash in the pan. With suitcases full of favorite tunes and a hot band, fans have little remaining need for open-chested shirts or the flowing, curly blond locks of yore.

The thousand-watt smile Frampton flashed across the big screens at Huntington Bank Pavilion on Sunday night during the propulsive “Lying” didn’t hurt, though. The guitarist joked about his youthful image while removing his blue jacket afterward. “That’s as far as I go,” he said. “Unlike the old days. I’d rip me shirt off every chance I got!”

2019 marks 50 years since Frampton played the Auditorium Theatre with Humble Pie, and frequent stops as a solo act have made Chicago a stronghold of support. Sunday night’s performance, however, was likely his last in town.

Frampton’s current trek is billed as Finale: The Farewell Tour, a move that appears to be borne of necessity rather than desire to settle down. Frampton has announced retirement from regular touring at the end of 2019 due to Inclusion Body Myositis, an autoimmune disease that weakens and atrophies muscles in the legs, arms and hands. Finger flexor deterioration will eventually impede Frampton’s ability to play at his peak, and the admitted perfectionist has decided to stop roadwork while still in top form.

No compromise to Frampton’s deft touch was evident at Northerly Island. The perfect pop jangle of “Show Me the Way” had the crowd singing, and ‘80s riff-rocker “Breaking All the Rules” threw sparks. The talented Peter Frampton Band sounded positively elevated during songs from the chart-topping “All Blues,” including a euphoric “Georgia On My Mind” and Freddie King’s rowdy “Me and My Guitar.”

Frampton filled the evening with amiable stories that deepened listeners’ connections to the songs. He described writing “Show Me the Way” and “Baby I Love Your Way” on the same day in 1974 during a writing retreat to the Bahamas. “I’m trying to have a good day like that again,” he said.

Treats included 2017’s sweet acoustic single “I Saved a Bird Today.” Knowing casual fans’ resistance to newer fare, Frampton asked the faithful to cheer as if it was “Do You Feel Like We Do.” Before actually concluding the set with the latter and its trademark talking-guitar solo, Frampton introduced his distinctive black Gibson Les Paul.

“This is the guitar from the cover of ‘Frampton Comes Alive’ that went missing for 32 years in South Africa,” he said. “I’m so grateful to have it back. And guess what? It sounds just as good as it used to.”

Frampton made no mention of his health until the encore, when he acknowledged that some were probably aware of his condition. “All I feel from you is your incredible, warm love,” he said. “You’re gonna heal me!”

“How about some Humble Pie,” said Frampton, changing the subject. The encore concluded with Humble Pie’s blues-rock basher “I Don’t Need No Doctor,” as recorded on the 1971 live album “Performance Rockin’ the Fillmore.” It was a way to celebrate 50 years of musical history and promote the power of positive thinking simultaneously.

“Thank you for coming,” said Frampton afterward. “I can’t say goodbye.” Fans who have witnessed the arc of Frampton’s career in Chicago will have a hard time letting go, too.

“Lines on My Face”

“Show Me the Way”

“I Saved a Bird Today”

“Georgia On My Mind”

“Me and My Guitar”

“Breaking All the Rules”

“I Don’t Need No Doctor”