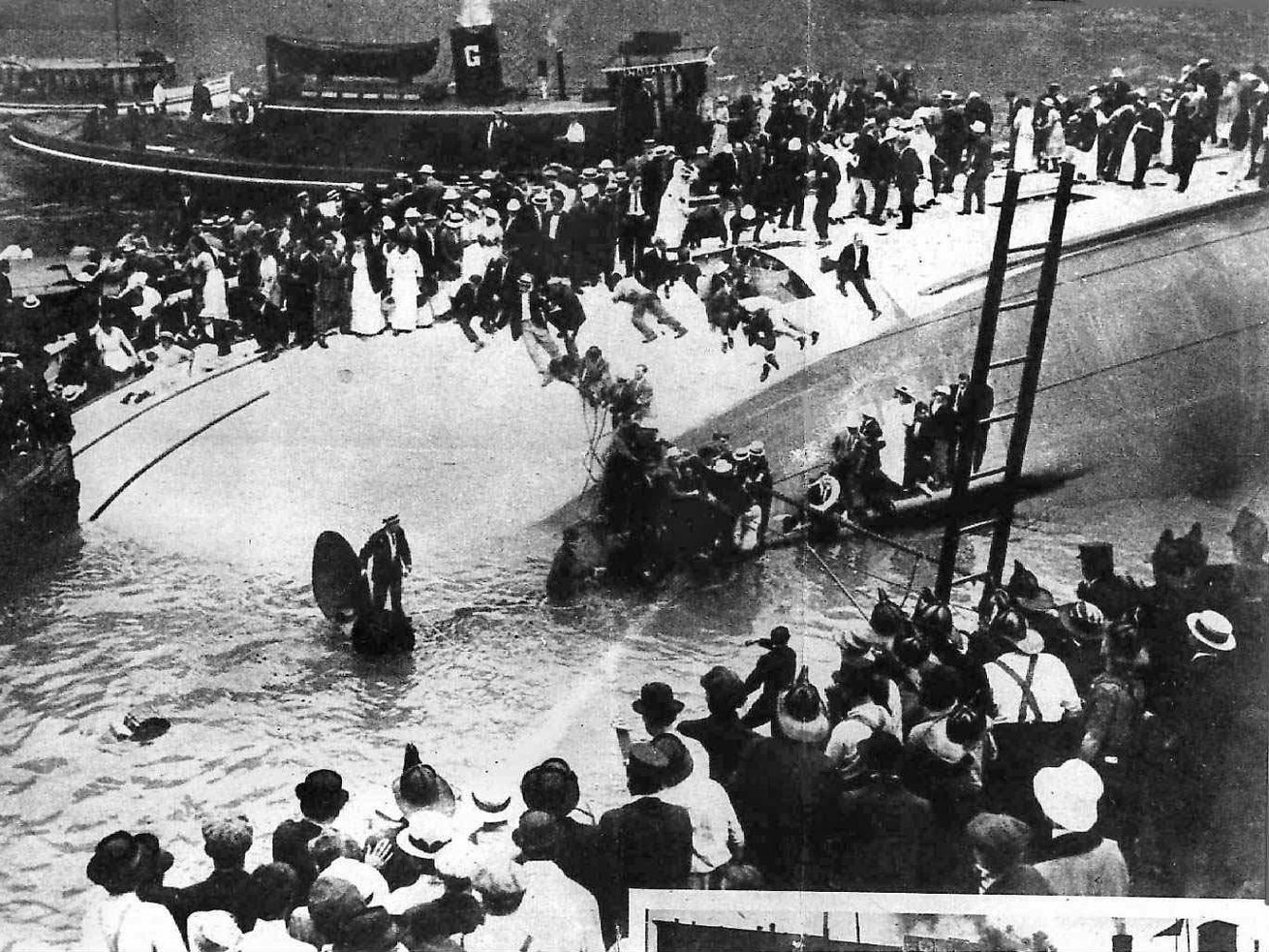 The steamer Eastland lies capsized in the Chicago River on July 24, 1915, as crews attempt to rescue passengers. | Sun-Times file

Even with the presence of a large plaque at LaSalle and Wacker commemorating the S.S. Eastland disaster of 1915, it’s likely many of the thousands of Chicagoans and tourists hustling across the bridge or enjoying the recently beautified Riverwalk know little or nothing about the horrific tragedy that claimed the lives of 844 men, women and children on July 24, 1915.

But it happened right there, on the banks of the Chicago River. An enormous steamship carrying some 2,500 passengers toppled over before even leaving the docks and turned into a death trap.

That changes with the new and fascinating documentary “Eastland: Chicago’s Deadliest Disaster,” premiering at 8 p.m. Thursday on WTTW-Channel 11.

On July 24, 1915, some 2,500 employees of the Western Electric Co. in Cicero, many accompanied by their spouses and children, boarded the Eastland for a picnic excursion to Michigan City, Ind.

They had no inkling of just how precarious and risky it was for that many people to even board the Eastland, a passenger ship that had been designed more like a cargo ship.

People are generally gathered on the top of a ship. Cargo is loaded on the bottom.

Almost immediately, the Eastland began to list. Efforts by the captain and crew to right the ship only served to make matters worse — and in a flash, the steamship tipped over and turned into a “torture chamber,” as one interviewee describes it.

“Eastland” is filled with insightful interviews with professors, authors, historians and the descendants of passengers. (We also hear from actual survivors in archival interviews.)

The visuals are stunningly effective and sometimes shockingly memorable. In addition to some well-staged re-creations filmed aboard the S.S. Keewatin, a steamship of the same design and from the same period that is now moored as a museum at a port in Ontario, Canada, “Eastland” features newspaper photographs and newsreel footage, including some long-unseen clips discovered in 2015 by Jeff Nichols, a researcher at the University of Illinois-Chicago.

That graphic, gut-wrenching footage was shown in movie theaters around the world in the summer of 1915 but was banned in Chicago by Mayor “Big Bill” Thompson.

Everyone knows about the Titanic disaster, which took place just three years before the Eastland, but as the documentary points out, there’s something inherently more dramatic about a ship filled with some of the wealthiest people in the world hitting an iceberg in the ocean and splitting in half, as compared to the story of a ship populated by working-class immigrants and their families toppling into a muddy river.

And yet “Eastland” tells the stories of a plethora of real-life characters worthy of a big-budget feature film or limited series, including:

• Nurse Helen M. Repa, who arrived on the scene and took charge — tending to injured passengers and commandeering the newly constructed Reid Murdoch Building across the river as a makeshift hospital.

• A 17-year-old daredevil named Charles Reggie Bowles, who jumped on a motorcycle, raced to the scene, punched a Chicago cop trying to keep him from breaking through security lines and repeatedly dove into the river to search for survivors. Bowles, who could hold his breath for some three and a half minutes, was dubbed by the newspapers as “The Human Frog.”

• Carl Sandburg — yes, THE Carl Sandburg — was working as a newspaper reporter at the time and described the Eastland as looking “like a dead jungle monster shot through the heart.”

• Jun Fujita, a Japanese-American photojournalist who captured indelible images, including an unforgettable picture of a horrified firefighter holding the lifeless body of a young child.

As for villains, there was one Walter Steele, the majority owner of the company that owned the steamship, who upon hearing of the disaster journeyed to the city — but had lunch with his father at the Chicago Athletic Association before bothering to arrive on the scene.

Then there were the thieves who stole items from bodies in the morgue, and broke into the homes of families attending funerals.

Like most tragedies, the Eastland brought out the best and the worst in humanity. This valuable documentary does a magnificent job of shining the spotlight on all sides of the story.