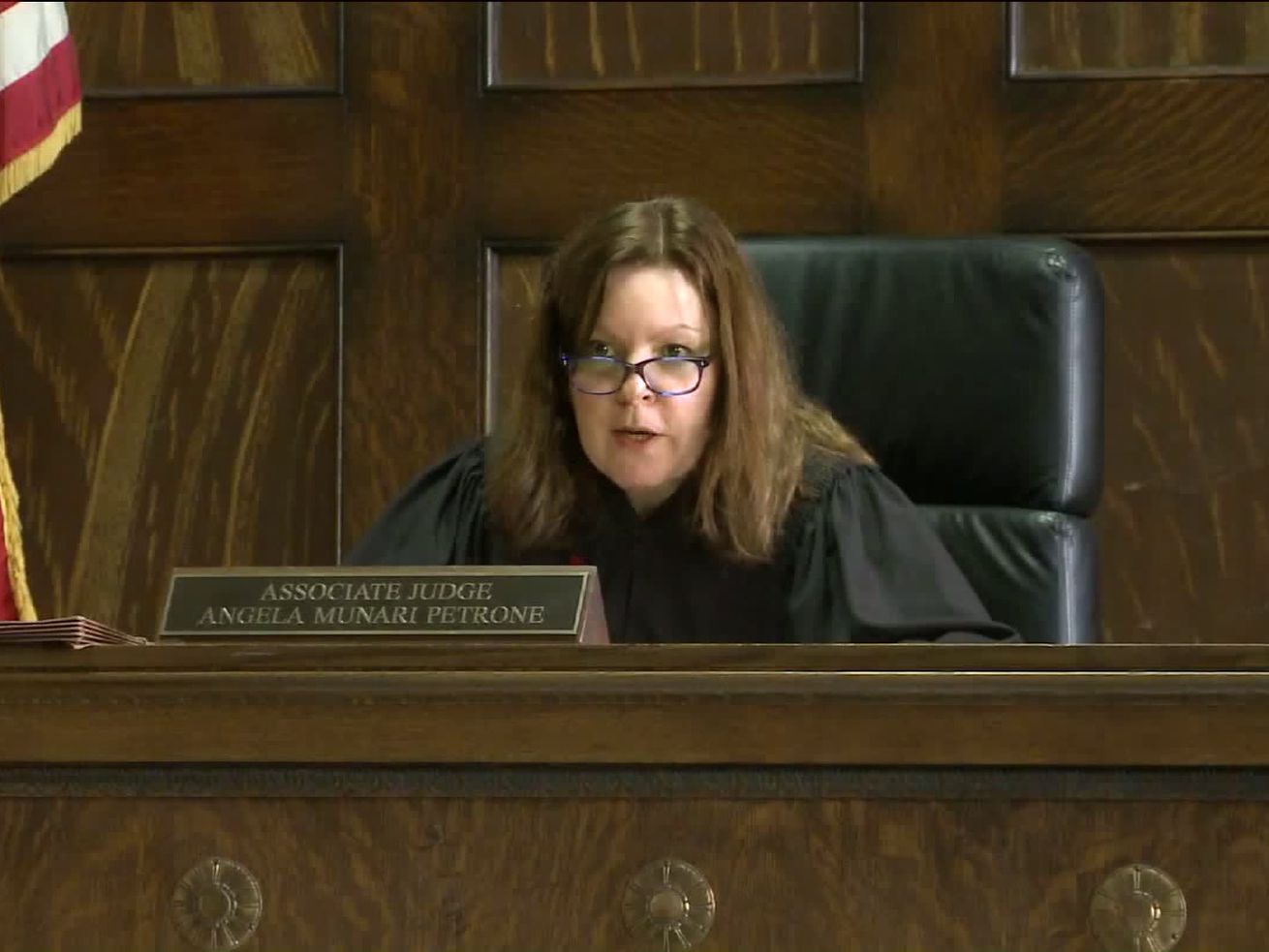 Found guilty of attempted murder in a drive-by shooting, Ricky Fountain and Dwayne Hill had good reason to think their convictions would be overturned when they came before Associate Cook County Judge Angela M. Petrone last June.

The victim, Demetrius Harris, had identified Fountain and Hill, recanted, then repeated his allegation. But evidence surfaced that Harris had been coerced to implicate them. And there were other problems, including evidence of an alibi Hill’s lawyer promised in his opening statement but never produced.

After a lengthy re-investigation, the Cook County state’s attorney’s office said it wouldn’t oppose the convicted men’s efforts to overturn the verdicts.

But Petrone decided to do her own review, and, last August, rejected their bids for a new trial despite the questions even prosecutors had about their guilt.

Fountain and Hill were freed the following month when the Illinois Appellate Court granted a joint prosecution-defense motion to overturn the verdict in “the interests of justice.” Charges against both men were dropped.

It’s unusual for a judge to reject a defense motion prosecutors don’t oppose. For Petrone, a former assistant state’s attorney who became a judge in 2007, it happened twice in two years.

She’s one of 138 associate Cook County judges trying to keep their seats this month in a selection process that’s solely up to the county’s circuit judges, voting in secret.

Nearly all of them got favorable recommendations by the Chicago Bar Association. But that doesn’t mean they all have unblemished records, according to an examination by Injustice Watch that looked at factors including sentencing records and reversals on appeal and also included extensive interviews.

Among them: Domenica Stephenson, who acquitted three Chicago cops charged with perjury, accused of lying to cover up convicted Officer Jason Van Dyke’s misconduct in shooting and killing Laquan McDonald in 2014.

Another: Neera Walsh, whose decisions have been criticized by the Illinois Appellate Court, in one case over her handling of a case in which a defendant said in post-conviction proceedings that he’d been forced to confess to a 1989 double murder after being tortured by a detective under the command of disgraced former Chicago police Cmdr. Jon Burge.

Though the detective took the Fifth Amendment rather than answer post-conviction questions about the interrogation, Walsh first denied the defendant’s claim, saying there was enough other evidence. After the appellate court reversed Walsh and sent the case back for her to reconsider, telling her she needed to look adversely at the detective’s refusal to testify, she again found the defendant’s claim not credible.

In March, the appellate court, noting Walsh “apparently felt free to reject our findings,” found the judge had committed a “serious error,” weighing the evidence with “a heavy thumb on the scale.”

The defendant, James Gibson, has since been freed, the charges dropped.

Then, there’s Petrone. Less than two years before the Hill and Fountain case, the judge rejected a joint prosecution-defense motion to overturn the conviction of Adam Gray, who was sentenced to life in prison for murder and aggravated arson, based on evidence he set a fire to an apartment building, killing two people. Among the evidence: a confession police got from Gray, who was 14 then, and evidence that a liquid accelerant started the fire.

Gray had retracted his confession, saying it was coerced. And the analysis of the forensic evidence had been debunked by scientific advances since his conviction.

Still, Petrone found “no showing” that Gray’s rights were violated and wrote that it was unlikely the new evidence would change the verdict.

The state’s attorney’s office and defense jointly appealed. In May 2017, the appellate court granted their motion. After being held 24 years, Gray was freed and last year was awarded a certificate of innocence.

On the bench for more than 30 years, Judge Stanley Sacks has faced a series of controversies.

After Sacks swore in court in 2004 at a cop on trial for reckless homicide, Chief Judge Timothy Evans said he found Sacks’ comments “an egregious lapse of decorum and dignity.”

Another time, Sacks called 911 to report he was being “unlawfully restrained” in the courthouse parking lot because, with heightened security, deputies asked for his identification.

In another case, the Illinois Appellate Court reversed a conviction on charges of attempted murder of Chicago police officers, citing Sacks’ “highly offensive” comments during sentencing. It said his “sarcastic and biased comments reflected neither dignity nor courtesy.”

That decision, in the case of Antonio Jones, was one of 21 since 2012 in which higher courts reversed convictions or rulings in cases presided over by Sacks. Jones’ was one of five cases in which appellate courts ordered a different judge be assigned for any further proceedings — a rare step taken when there’s reason to doubt a judge’s impartiality.

Jones got a new trial based on improper comments the prosecutor made in court. But in ordering the case go to a new judge, the court cited Sacks’ comments at sentencing, calling them “unwarranted and wholly inappropriate.”

After Jones apologized to his children, the judge said of Jones and his co-defendant: “I don’t believe they thought about their kids in the slightest on that day. No one. If someone said, ‘Hey, man, how are your kids doing?’ their response would be ‘What kids? I got kids somewhere?’ “

The unanimous 2016 appellate ruling said Sacks’ comments “leave little doubt that they were derisive and intended to malign an entire class of criminal defendants.”

In the case of Jose Lopez-Medina, an appellate panel said Sacks “appears to have prejudged a central issue” by dismissing Lopez-Medina’s claim that medical evidence should have been introduced that would prove him innocent of a sexual assault for which he was convicted. The panel ordered the case be given to another judge.

In 2004 Sacks had denied post-conviction petitions of Arturo Reyes and Gabriel Solache, both convicted of double murder and kidnapping. Solache was sentenced to death, Reyes to life in prison. Solache said they confessed only after being beaten by Reynaldo Guevara, a former detective linked to dozens of allegations of abuse.

The panel found Sacks prejudged the case and sent it back for a hearing with a different judge.

Solache and Reyes have since been exonerated.

Associate Judge Joseph Claps’ rulings has been reversed 15 times since 2011. More cases were sent back for resentencing.

Last year, Claps was arrested after he dropped what deputies said was a gun as he walked through the lobby of the Leighton Criminal Courts Building. An out-of-county judge who heard the case ruled there was no proof the object was a gun.

In 1998, Bernard Williams went on trial before Claps, accused of killing Gary Thomas and wounding three others outside a bar in West Garfield Park two years earlier. The prosecution said it was gang retribution, and the intended victim was a gang member named Eric Smith.

Williams said he never gave police a statement, asking for a lawyer. Kato and another detective, Patricia Sawczenko, testified Williams confessed, but neither had taken notes nor was the interview recorded. Williams refused to repeat his confession to prosecutors, Kato said.

Claps found Williams guilty of murder and aggravated battery. He gave him 80 years in prison, a sentence reduced by the appellate court to 60 years.

In 2011, Williams sought to overturn the verdict, with an affidavit from Smith that Williams wasn’t the shooter, and one from an investigator for the public defender’s office who said Nash, who was in prison, contended he falsely identified Williams in return for money and help from prosecutors in his own case.

Claps found the evidence insufficient to warrant a hearing.

A divided appellate panel ruled that Nash’s recantation, the statement from Smith and the fact that Williams never confessed to prosecutors was enough to merit a hearing.

The case went back to Claps. Smith testified Williams wasn’t the shooter. Nash recanted his trial testimony, saying, for his cooperation, prosecutors kept giving him small amounts of cash, which he used on drugs.

Claps didn’t Smith or Nash credible and denied the motion.

In February, the appellate court again reversed Claps, ordering a new trial: “The old and new eyewitness evidence does place the evidence at trial in a different light and undermines the court’s confidence in the factual correctness of the original guilty finding.”