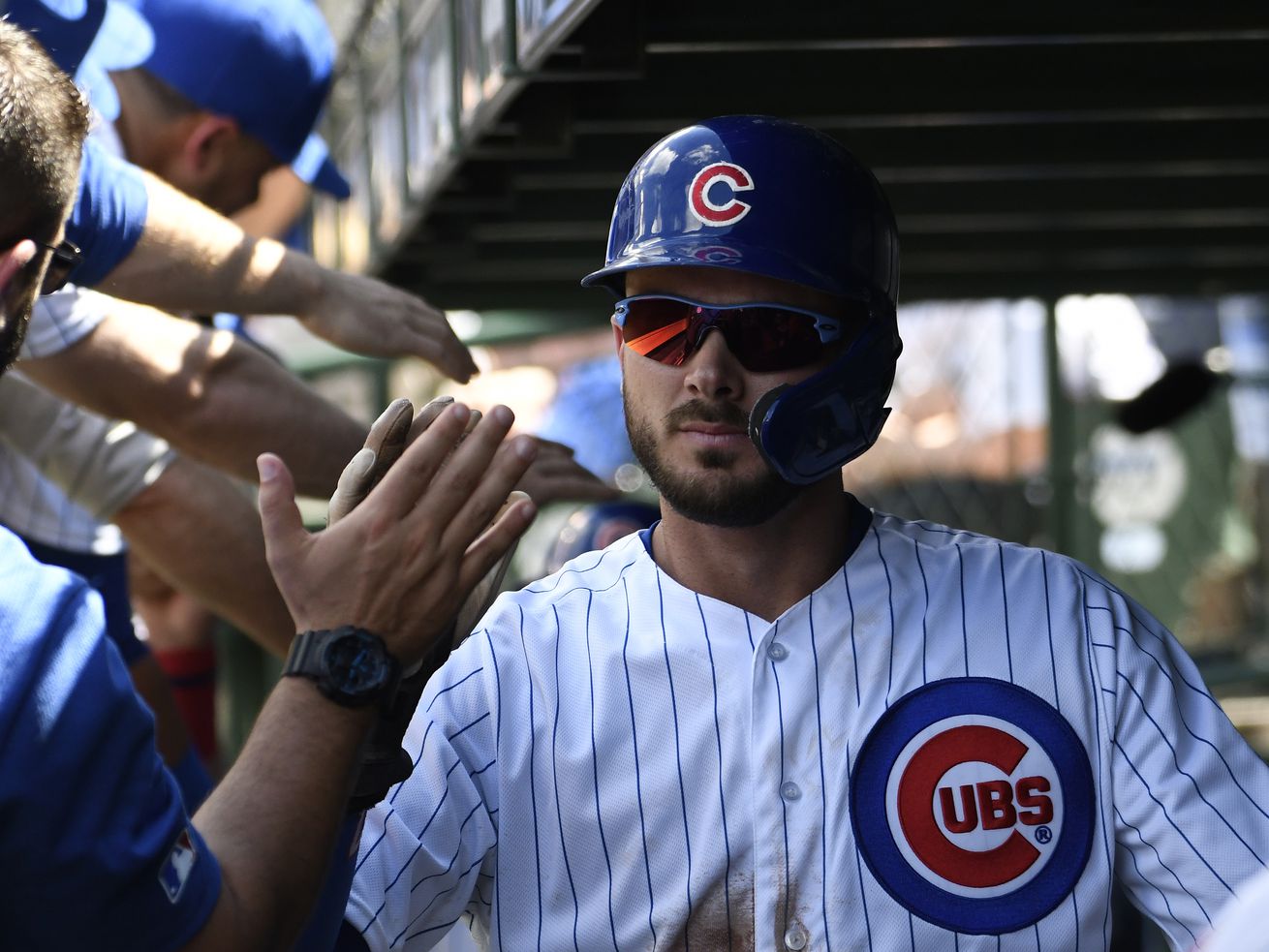 The Cubs dropped to 0-4 when Kris Bryant doesn’t start this season after losing 8-6 to the Astros on Tuesday night.

HOUSTON – Cubs third baseman Kris Bryant, who has been sidelined since colliding with teammate Jason Heyward in the outfield Sunday, might be ready to return to the lineup Wednesday for the final game of the Astros series, manager Joe Maddon said.

Bryant hit in the batting cage and took grounders at third before Tuesday night’s game, and seemed to fare well. He’s expected to be evaluated again early Wednesday before a decision is made on the lineup.

Bryant, who’s hitting .353 with nine homers and a 1.219 OPS in his last 23 games, left Sunday’s game in the sixth inning after injuring his head and neck area in the collision with Heyward.

Heyward, who did not hit his head in the crash, stayed in the game Sunday but was sore enough to miss Monday’s game. He returned to the lineup Tuesday and hit his eighth homer of the season (matching last year’s total) during the Cubs’ three-homer second inning.

Maddon said he will not consider giving Bryant an extra day off with the team scheduled to be off Thursday.

Shortstop Javy Baez, who bruised his right heel on a defensive play May 19, still is bothered enough by it that Maddon is using the designated hitter during this interleague series to lessen the load on his most dynamic player.

“It’s just bothering him a bit laterally,” Maddon said. “If this was a National League game he might be playing at shortstop.”

Maddon said he hasn’t determined whether Baez will bat as the DH again Wednesday.

“I left it open for him to let me know when he thinks he wants to get back out there,” Maddon said. “He knows how he feels. I trust him.”

If his response after striking out five times Monday was any indication, Baez might push to return to the field.

“I’ve got to be moving around,” Baez said. “I tried to hit in the cage [to stay active and ready between at-bats]. I’m not going to say it didn’t work, becauseI was seeing the ball good, just swinging at pitches out of the zone. … We’ll see what happens.”

He struck out three more times Tuesday in a 1-for-5 game.

Reliever Pedro Strop, who’s been on the IL the last three weeks because of a hamstring injury, made his first minor-league rehab appearance Tuesday night for Class AAA Iowa, needing just six pitches — all strikes — for a scoreless inning.

He gave up a leadoff single, followed by a double play and a fly ball.

Strop, the Cubs’ closer since Brandon Morrow was sidelined almost a year ago because of an elbow injury, also is scheduled to pitch an inning for Iowa on Thursday before likely being activated.

“Once we get him back, the bullpen will catch a second wind I think,” Maddon said.

Notes: Left-hander Mike Montgomery, who thinks the middle finger pain he experienced while warming up Monday was a popped blood vessel, said he felt better when throwing Tuesday and expected to be able to pitch if needed. … For the first time since May 31, 2008, Cole Hamels in a four-inning start on Monday didn’t strike out a batter in a start – ending a streak of 343 starts with at least one. It was the fifth-longest streak since at least 1908, behind Nolan Ryan (382), Randy Johnson (351), Javier Vazquez (349) and Dwight Gooden (349). …One day after Astros infielder Jack Mayfield doubled off Hamels for his first hit in his big-league debut, debuting Astros catcher Garrett Stubbs had two hits off Jon Lester on Tuesday night.