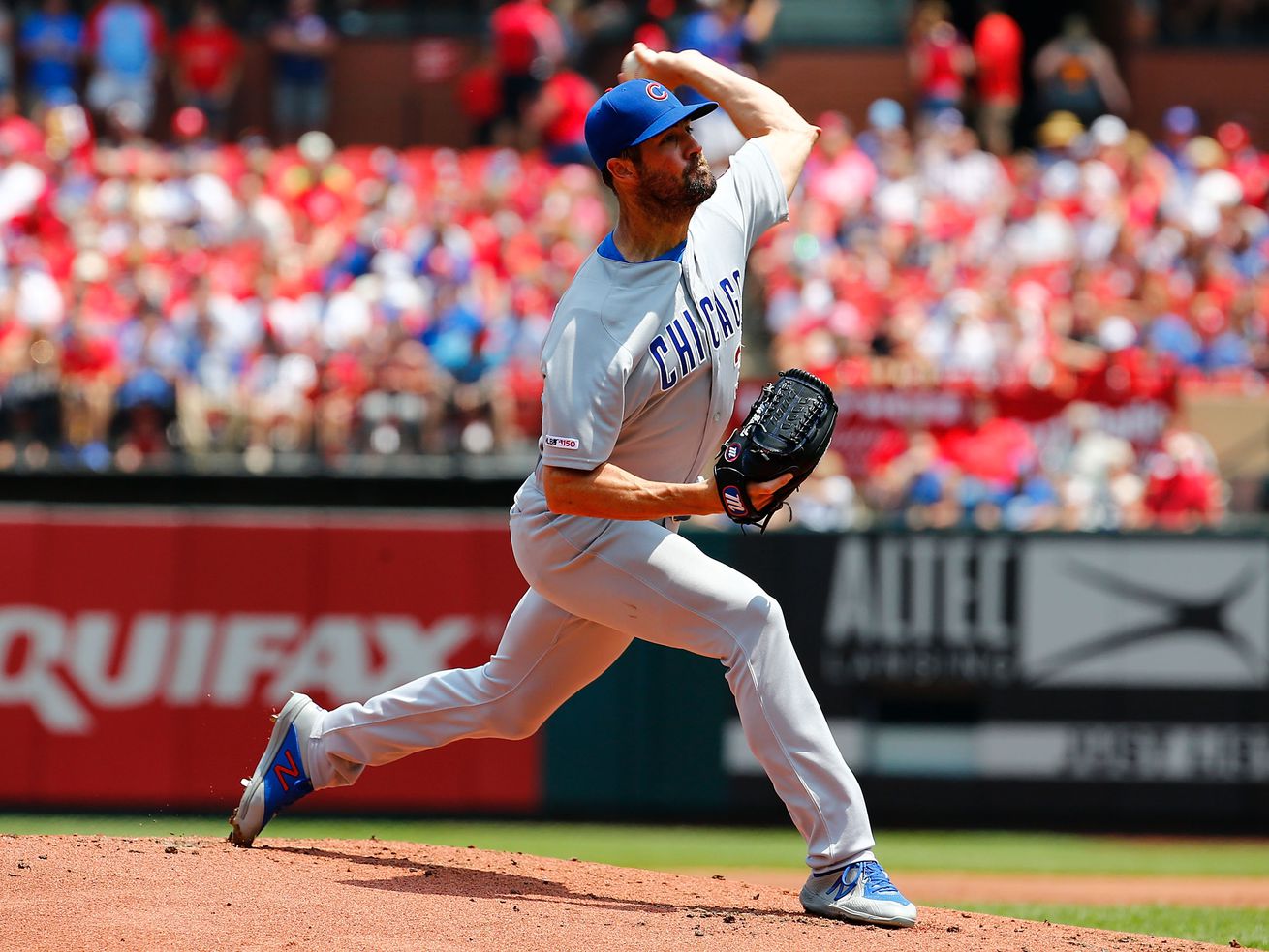 No-hit through five innings by Wainwright, they finish with three hits to conclude 1-5 road trip — their 12th loss in 18 games

ST. LOUIS — Joe Maddon was just lamenting the Cubs’ recent spate of tough luck — Kris Bryant’s line drive up the middle Saturday night getting deflected by the pitcher into an out. Fly balls down the line by the Cardinals’ Kolten Wong and Matt Carpenter falling in for key hits.

“Really,” the Cubs manager said. “Wong on the left-field line Carpenter on the left-field llne. We’ve been getting killed on the lines lately and up-the-middles. There is such a thing as [that’s] baseball. We’re in a bad string of it right now. It’s gonna come back to us.”

The Cubs’ luck seem to finally be turning when they trailed by a run in the eighth inning of Sunday’s game at Busch Stadium. Kyle Schwarber’s pop fly down the left-field line dropped inches fair to give the Cubs runners on first and second with one out and Kris Bryant and Anthony Rizzo up.

But it was not to be. After Bryant struck out, Rizzo hit a flare to right field that looked like it might fall for a game-tying RBI hit. Instead, second-baseman Wong, playing in shallow right to start as is customary against Rizzo, chased it down and reached up for a dazzling catch — a near sno-cone — for the final out of the inning.

That’s a pretty much how the Cubs are running these days — a key strikeout by a primary run-producer, a tough break and a poor approach in general against veteran Adam Wainwright marked a 2-1 loss that gave the Cardinals a three-game sweep. The Cubs (31-26) had two hits against Wainwright and three for the game to finish a 1-5 road trip with their 12th loss in the last 18 games.

The Cubs are back in the same rut as when they started the season 3-8. Cole Hamels allowed one unearned run and two hits in seven innings and lost. When Bryant broke up Wainwright’s no-hitter with a sharp single to left with one out in the sixth inning, he was promptly doubled off first after shortstop Paul DeJong caught Rizzo’s line drive.

“It’s a weird part of playing 162 games,” Maddon said. “We’ve just got to keep fighting through it. There’s nothing to cry about. We’ve got to hit better. We just have to do a better job. We have to reorganize our strike zones, make the pitchers throw the ball over the plate and stay in the middle of the field.”

Rizzo, the Cubs’ hottest hitter, suddenly had the toughest luck. But he wasn’t lamenting fate with the Cubs in a slump. “We’ve got to give ourselves a better chance — more opportunities than we’re giving ourselves,” Rizzo said. “That’s the ebb and flow of the season, where we’re grinding right now as a unit. We’ve just got to get back on track and take it one at-bat at a time.”

The Cubs slump figures to induce the usual amount of anxiety among the Cubs’ faithful. But Maddon is pretty confident in the make-up of his team.

“I can’t worry about the folks that feel as though the sky is falling,” Maddon said. “My approach is to remain process-oriented. My approach is to continue to have faith in my guys, and that’s it. It’ll come back.”

How does he know?

“Listen, I’ve done it for awhile,” said Maddon, who has taken the Cubs to the playoffs in four consecutive seasons. “I try to remain with my thoughts and my process. I’m always adaptable. I’m willing to make changes. But I think I know what I’m seeing right now.”