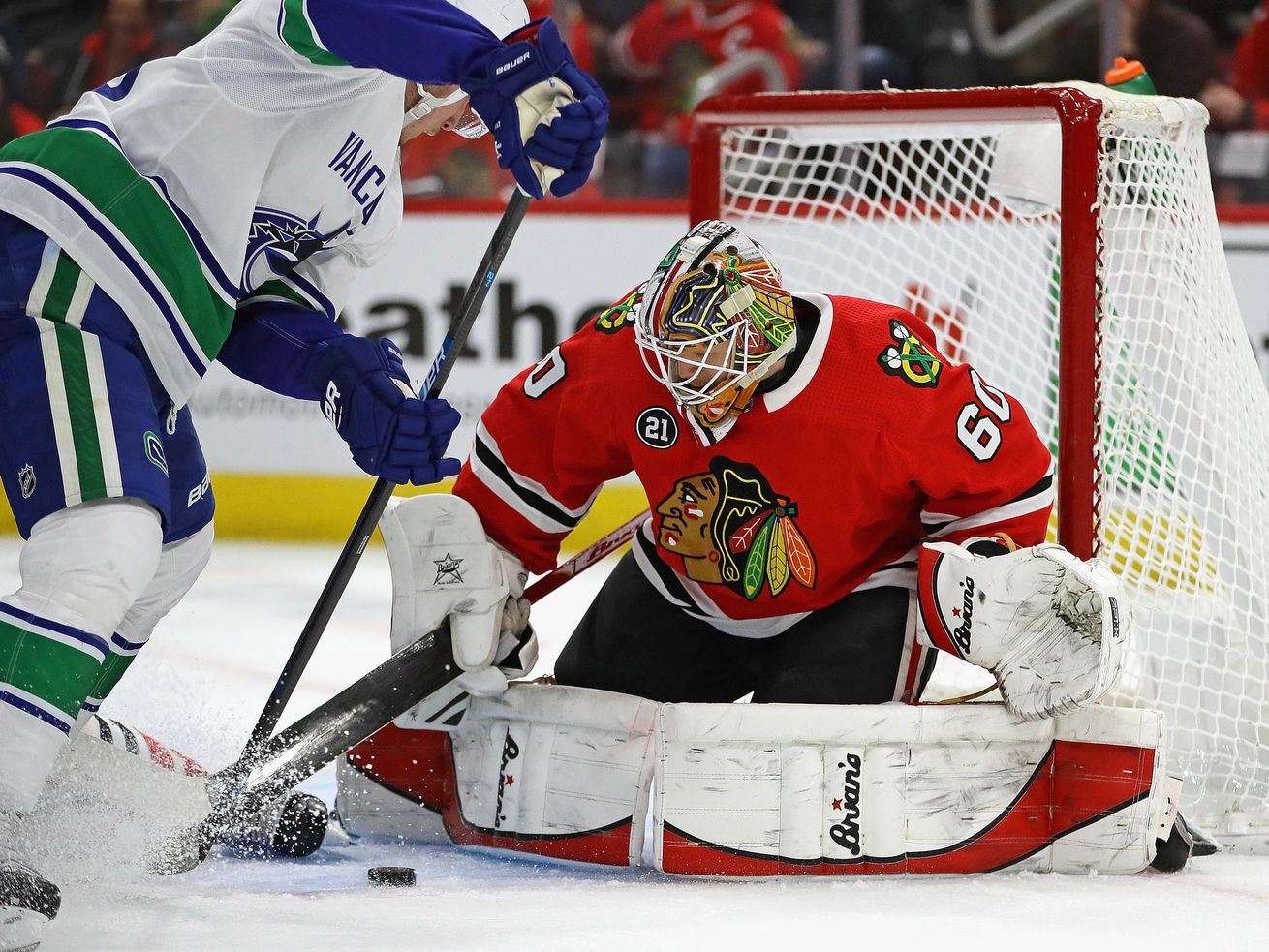 Collin Delia was solid in fill-in duty for the Blackhawks last season, and isn’t convinced that Robin Lehner’s signing this summer will bump him back down to the AHL. | Getty

The Hawks clearly see veteran Corey Crawford and star addition Robin Lehner as their top two goaltenders for 2019-20. Presumed No. 3 option Collin Delia has plans to re-enter his name into the conversation.

It was clear on Jimmy Waite’s face: The Blackhawks’ goaltending coach is very excited for the season to come.

Corey Crawford remains the franchise’s cornerstone goalie — for now — but the addition of Robin Lehner, a 2019 Vezina Trophy finalist, completely reconstructs the position group. With a pair this experienced and talented, Crawford’s injury struggles aside, Waite can hardly go wrong.

So perhaps one can’t blame him for writing Collin Delia, the 25-year-old that most thought had won the permanent backup job after he signed a three-year, one-way contract in February, completely out of the picture.

“It’s good for him this year to be able to play another year [in the AHL] and get some more experience and make sure that, when he comes in for good in the NHL, that you’re ready for it,” Waite said Friday at Blackhawks Convention.

But Delia himself has other plans.

Statistically, Lehner, 28, was the clear best of the three goalies last season — yet Crawford, and Delia were essentially identical.

The newcomer ranked second in the league last year with a .930 save percentage, albeit on a much more defensively stout Islanders team (with the Sabres the season before, his save percentage was .908.)

Crawford and Delia, meanwhile, both turned in .908 averages with the Hawks.

But of course, that doesn’t make them equal. The 34-year-old Crawford has proven himself repeatedly over his decade-long career; Delia was only signed two years ago as an undrafted college free agent.

And after returning on Feb. 27 from his second injury absence, Crawford recorded a .919 save percentage in 16 appearances the rest of the way, while Delia sunk his average with an .880 mark from Jan. 17 on.

“I thought he was the same old Crow, the last month or so,” Waite said.

Naturally, therefore, much of the attention has focused on how Crawford, not Delia, has responded to Lehner’s addition.

Crawford is one of few players not in attendance at the convention this weekend, but Waite said the move wasn’t made to send a message to him.

“Corey’s been hurt a lot the past two years,” the coach said. “Bringing in a second veteran guy, we had to do that this year [because] this is a very big year for us. We needed that to protect ourselves if something happens. Hopefully, everything’s going to go smoothly.”

Still, Delia can make a convincing case that his 2018-19 performance deserves a little more thought going into training camp than it’s receiving.

He’s watched Martin Brodeur clips all summer while working on his own puck-moving skills. He’s also about to open a leather store in Pilsen. He doesn’t sound like a man planning to leave Chicago soon.

“If anything, it was reinvigorating: If this is what I want to do, if this is the business I want to be involved in, things like this are going to happen,” Delia said. “I want to eventually be the starter here one day, and I will have to do things each year to prove that.”